Maximizing Field Use and Budgets with Seasonal Domes

When the University of Cincinnati joined the Big East Conference in 2006, it was one of two member schools that didn't have an indoor practice facility for its athletic teams, an element the athletic department deemed essential if its teams wanted to stay competitive. Space for such a facility, however, was harder to come by.

"They came up with the idea of taking a couple of parking lot areas on the southeast side of campus and wanted to do a field and a half," says Mike Schuster of Columbus, Ohio-based MSA Sport, the architecture firm hired to oversee the design for Sheakley Athletics Center, which opened in August 2011. "Because of the limited budgets and other responsibilities of the athletic department, they wanted to make sure it wasn't just a big building. They also wanted to have open field areas that they could use for other sports — some high school football games are played there, and it's the women's lacrosse home field."

The school opted for a design that utilized a seasonal dome, an air-supported fabric structure that could be taken down during the warmer months to accommodate competitive play but also allow the same space to be used for training during inclement winter months.

Seasonal domes, while not a new creation, are gaining in popularity, particularly in northern climates. Schuster thinks the choice is a byproduct of another trend in athletic construction. "If you look at the climates where you have cold weather, snow and ice, there are two products that I think have changed and will continue to change the idea of sports facilities not only at colleges but also at some levels of high schools: dome systems and artificial turf," he says.

After investing a large amount of money into a field that can handle nearly constant use, synthetic turf owners don't want to lose playing time to the weather conditions. "They run all their sports and use that as a training facility during winter months — football, men's and women's soccer, lacrosse," says Schuster of Cincinnati's new facility. "It's used almost round the clock during the school year." 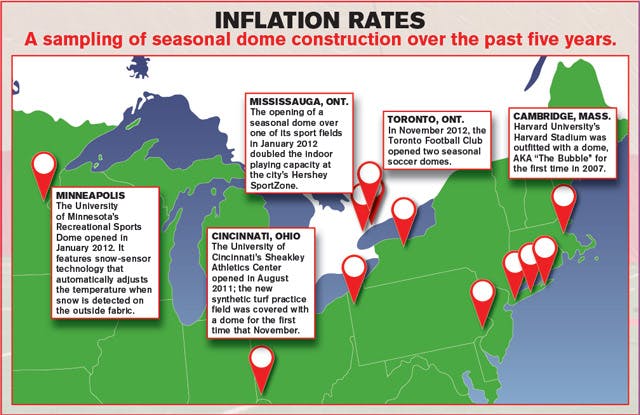 CRACK THE CODES
Year-round use is the primary benefit of any enclosed field, but why go through the work of putting it up and taking it back down every year when a permanent structure would do just as well? Well, for starters there are situations in which a permanent structure just won't do at all. "It could be code-related," says Steve Flanagan, president of Yeadon Fabric Domes in Minneapolis. "The facility owner can't get a year-round facility put in due to code or zoning."

Though the zoning requirements might be more relaxed for temporary structures, there are still guidelines that must be heeded. "If there are zoning regulations that prohibit heights, you are restricted in terms of width," says Flanagan. The company's domes typically require a height equivalent to 30 percent of the width. "For instance, a 200-foot-wide field would go up 60 feet. If zoning requirements limit height to 35 or 40 feet, you'd have to stay with a structure less than 120 feet wide.

"The biggest code differences are that year-round buildings need to comply with energy codes and fire and sprinkler codes," Flanagan adds. Not that temporary structures are a way to skirt safety requirements. "You have to meet those in any commercial building, but it's a different design in an air structure," he says. For example, whereas requirements for permanent structures dictate overhead sprinklers, temporary structures utilize a water cannon design.

Building a domed facility is not as easy as erecting a structure over an existing field, either, cautions Schuster. The actual field design requires a few tweaks. "If you have a big field and you want to cover part of it, you need to have a drainage system that can be sealed off. If you can't shut off a valve, the air starts to escape through the drainage area and the dome starts to deflate."

There's also the foundation under the playing field to consider. "When you put these domes up, you need a flat foundation. Many domes have a raised concrete curb," he explains. The University of Cincinnati opted for a curb that was flush with the ground and could be covered with synthetic turf when the dome was not in use. Though not noticeable to the naked eye, the difference would be noticeable by athletes, says Schuster. "If you have a competition playing field, you can't start changing this surface area and not run the risk of differential footing or surfaces. So when we had the women's lacrosse field, the dimensions plus the necessary out-of-bounds dictated the size." 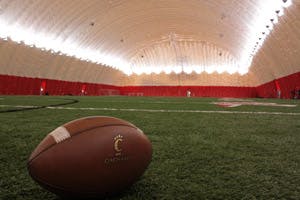 (DE)CONSTRUCTION COSTS
Building requirements aside, the price tag of air-supported structures compared to permanent buildings are a selling point. "The recession dropped our market, but we have seen in the last year or so many more inquiries and projects going in," says Flanagan. "Part of it is that people are feeling a little better about the economy, and part of it is that cost of construction is still relatively high compared to budgets, and the lower cost of the dome allows people to meet that budget and still get their project in."

While the initial cost of a seasonal dome, ranging from $8 to $11 per square foot, might be appealing, there are long-term costs to consider. "Putting it up and taking it down starts to add up," says Schuster. Generally, whatever company supplied the dome is also contracted to put it up and take it down each year (a two- to three-day process), though facility staff can also be trained to handle the task.

Storage costs should also be considered. "There's a multitude of options for storing," says Flanagan, adding that these range from stowing domes under a set of bleachers to having them transported to a warehouse for the winter. "It depends on whatever happens to be available."

Schuster recommends a flatbed trailer to minimize the amount of labor and transfers required. "If you can, take it down and put it on a trailer and wheel it somewhere," he says. "Or, if you have a storage facility adjacent to the field, you can move it there without using a trailer. You don't want to double the amount of work you have to do."

Air-supported structures also come with an expiration date, lasting anywhere from 10 to 25 years. "The dome itself has wear and tear," Schuster cautions. "When it's used, the sun shines on it and causes some level of degradation. The product is good, but it's not like a brick masonry wall."

Then again, costs for maintenance and upkeep on conventional buildings do increase as they age, as well, on top of the higher initial cost. "The incremental cost of building a new facility versus putting up and taking down a dome — it's going to take a while to reach that point of equilibrium," says Schuster. "If you start talking about a full football field, that's 80,000 square feet without locker rooms. Depending on how you finish it and how you build it, you still couldn't build a permanent structure for the cost of two or three domes."

Larger colleges with the money and space will probably still opt for conventional training facilities for their athletic programs, but seasonal domes continue to provide a solution for schools or facilities with limited budgets, space or both. "More and more small colleges and high schools are looking at how to do high-performance training facilities," says Schuster. "The domes help with that. If you can get a big area that you can practice at full speed all year-round, that's obviously a benefit to any school."