Emory Stansal of Lantzville Artisan Wood Floors in Lantzville, B.C., shared a mesmerizing video from an unusual gym job that went viral on social media—with more than 73,000 likes and 925 shares on Facebook (scroll down to see his post). Here’s the story behind his video, in his words:

“I've been a refinisher/hardwood flooring professional since 2002, and in that time I’ve done my fair share of gymnasium resands, usually doing local school district stuff every so often. Flash forward to last summer, when we were asked to resand an elementary gym that hadn't been touched since the 1960s (we didn't find this out until we started) ... it turned out to be one of the toughest grinds I've ever encountered! So when we were offered another local elementary school this spring, I didn't let fear or common sense hold me back, and figured, 'It can't be as bad as the last one...'

“Well, I'm a slow learner and couldn't have been more wrong—a long day of hard coarse-grit sanding had me constantly stopping to unclog my drum sander and vacuum with large shreds of finish, and toward the end of the day I happened to pull on a peeled-up corner that ended up being a pennant-sized piece that included every layer of finish ever applied in the school’s 30-year existence (minus most of the court lines and sealer underneath). I couldn't believe it, so it became a challenge to see how big of a piece I could tear out. I figured I better video-document it since this would likely be something I will never see again. After posting a short clip on social media, I had quite a few people requesting more, so I put together a montage that went viral and had me getting a LOT of people wanting to come help peel! 🤣🤣 I also had a lot of comments indicating it was probably easier than sanding—I would argue it was just a different kind of hard (but much quicker than sanding would've been) that overworked a very different set of aging muscles. Definitely a unique experience that will most likely never be repeated. I also think I've finally learned my lesson with the local school district: Fool me once, shame on you, fool me twice and maybe three?... Time to wake up! 🤣🤣🤣”

RELATED: How They Do It: Pulling Off Today’s Bold Basketball Floors 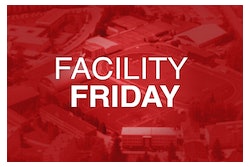 A college basketball season that has seen ugly scenes in recent weeks got another dose of unsportsmanlike conduct Tuesday, as a fight broke out in the stands during the Northeastern Conference tournament championship game.
March 9, 2022
Facilities

This week: Check out a new $200,000 outdoor fitness space at Louisiana State University, a new practice facility for basketball at the U. of Akron and renovations at the U. of Vermont’s Patrick Gym...
February 18, 2022
Page 1 of 35
Next Page
AB Show 2022 in Orlando
AB Show is a solution-focused event for athletics, fitness, recreation and military professionals.
Learn More
Buyer's Guide
Information on more than 3,000 companies, sorted by category. Listings are updated daily.
Learn More