Cross the threshold into any high school gym and the wall of sound will likely be the same — a low hum of humanity interrupted by collective outbursts, the well-rehearsed chants of a cheerleading squad, perhaps a selection from a pep band’s playlist — or any combination thereof. Above this din, a solitary voice can be clearly heard and understood through a properly designed public address system.

Given most gyms’ combination of a hardwood court, cinder block walls and metal ceiling materials and components, providing for intelligible, amplified announcements can be an acoustical challenge.

“In general, most gyms at the high school level just simply don’t have a lot of attention paid to any sort of acoustical treatment at all,” says Dave Sturzenbecher, applications engineer at Daktronics, which has been pairing audio with its scoreboard and video display offerings for nearly two decades. “A lot of times it’s just open beams in the ceiling with open corrugated roofing, and none of that is very good for acoustics.”

That said, no two gyms are exactly alike.

“Every gym is different. There really is no cookie-cutter gym, because it depends on who builds it,” says Bobby Norton, technical engineer at Formetco Inc., a video display company that got into the sound game six years ago. “Some of them are two-tier, some of them just a single level with risers. Most of them are 30 to 40 feet ceiling height, but sometimes you will get higher — maybe 45, 50 feet. I take all that into consideration when I do audio.”

The goal is to strike a balance, given what takes place in the space.

“The gym has to have a certain amount of energy,” says Martin Bull, president of KDM Electronics Inc., makers of the Octasound system. “My father, back in the day, always said, ‘You can’t just take a gym and make it sound like a library.’ It loses its appeal. There has to be a certain energy to it, with the crowd screaming. It has to have that. If the sounds just died right away, no one would have any fun.”

Here are some of the key factors that influence sound quality within the confines of gyms.

Putting fans between a sound’s source and surfaces that may provide reverberation is critical.

“If you want good, intelligible sound in any venue, get the speakers as close to the listeners as you can,” Bull says, “because then you have the least amount of reflection before it hits someone’s ear.”

Norton agrees. “The closer I can get my speaker to the audience, the better the quality of sound that’s going to happen, because I don’t get a lot of that bounce back,” he says. “A lot of these schools I’ve gone into, people just threw audio up in the ceiling and expected it to sound really good, and it’s bouncing off of rafters, it’s bouncing off the floors.”

“With a lot of questions and answers in audio, it depends if the sound system allows you to turn off speakers that are pointing into areas where people may not be seated during a smaller event,” Sturzenbecher adds. “Some gyms have higher, upper seating and they need some delay fills to cover it. If there’s nobody seated up there, you can enhance the intelligibility for everybody in the space by turning those speakers off, because that just means there’s less energy hitting empty seats, bouncing around and creating reverberation.”

“If everything was mirrors, and you have one light bulb, where would you put it to light up the whole room? That would be in the middle. You get equal lighting everywhere,” says Bull, adding that most gyms don’t need much in terms of sound sourcing. “It’s a highly energized room. Less is more. If you went in there and did 10 speakers across each side, you create your own problem.

“If you put the speaker in the middle, it’s the longest distance before the audio waves are going to reflect off the wall and create an echo or reverb. That’s what causes problems in a gym. You have a highly reflective environment. You want to produce the least amount of high-energy reflection.”

Moreover, the direction from which fans are reached with audio carries with it some psychological impact. “From a psychological point of view, the human ear is not built to hear from behind, and when audio is presented to us from behind, we tend to turn our heads to try to focus on what’s being said,” Bull adds. “In a gym environment, where the basketball game is in front of you and the announcements are behind you, it actually can irritate the crowd. You’re straining to listen.”

One deviation from centrally located sound might involve a video board at one end of the venue. “When you hear a sound, you inherently look toward the direction of the sound,” Sturzenbecher says. “When those speakers are tied to the video board in some way, there are some psychological benefits to that, because you are just drawn to look at it.”

As Sturzenbecher points out, not a lot of acoustical forethought goes into most gym design. Rare is the case that concrete masonry featuring sound-deadening ridges and gaps is specified for gym walls. Still, measures can be taken to mitigate reverb within the space.

“There can be a lot of different things that are put in, and it’s a lot easier to put them in at the time that building is built, with acoustical lapendary and wall panels, other sorts of base traps, that can really go a long way toward enhancing any sound system that gets put in there,” he says.

Rigid acoustic panels come in various sizes, shapes and fabric colors, and are affixed vertically to otherwise untreated walls. Meanwhile, lapendary panels are “basically sound-absorbing curtains that can hang in the ceiling,” Sturzenbecher says. “They end up getting draped from beam to beam.”

Is there a sweet spot for PA sound within the gym space?

“For this market, I shoot for probably 6 to 10 decibels over what the crowd noise is,” Sturzenbecher says. “But we also have to have some limits in mind. You know, this isn’t a rock concert. People are there just to really hear what’s being announced. So, for these types of venues, 90 to 95 dB is really where I want the system to kind of max out. But I also don’t want a system that is being driven 100 percent all the time, because then you just fatigue your components so much quicker. I would rather have a system that can get louder, but doesn’t necessarily need to run at 100 percent all the time.”

“We set the maximums just before the speaker starts fluttering and there’s physical damage,” Bull says. “And then when you get it into the environment that it’s going to go into, a gym, you have to consider the energy of the room.”

Bull speaks in terms of a gym “taking off,” at which point “the noise energy and the speaker energy go into complete distortion, unintelligible. It’s not the speaker that’s actually going into distortion, it’s the entire environment. There’s just too much reverb, too many sound waves arriving at different times in people’s ears.
“So why go there? You just back it off a bit and that’s your sweet spot.”

The days of gymnasium sound being controlled by a complicated mixing console are fading. “One of the most common things I come across is just a mess of an interface, and the athletic directors being bothered by the fact that one or two people know how to do the set-up,” Bull says. “I don’t even have a user manual for my product. You want to make it end-user friendly, and that way anyone can come in and use the gym. What’s really important, I think, for a gym environment is student interaction. If someone wants to add more channels to my system, they can. If the music department wants to come in, and they want four microphones or instrumentation, then they can do that.”

Students graduate, and such constant turnover makes a system that minimizes training on how it works all the more critical, according to Bull. “We did one gym where they were amazed at how it brought the student body back to the gym as being more useful to them,” he says. “It doesn’t require that the athletic manager or another person be around to know how to use the system. It’s just simple.”

Norton is on the same wavelength. “I designed a digital system that when the coaches show up, or whoever shows up for that game, the sound system’s on and it’s just an eight-button controller in front of them with just one knob. When they hit ‘announcer’s mic,’ they just turn up the mic. That’s it. All my parameters are actually stored digitally in our rack.”

Parameter adjustments, if needed, are just as easy. “Let’s say they have a special event,” Norton says. “They can call us and say, ‘Hey, we have graduation coming up. Is there a way that we can get something changed in our audio system to adapt this system to this event?’ And I can go in and make those changes remotely. Then after it’s over with, I put it back to where it’s supposed to be.”

“Some of the systems that we install have a touchscreen that can trigger a volleyball preset, a basketball preset, a graduation preset. That’s been quite helpful for a lot of our customers,” says Sturzenbecher, adding, “One thing that we actually have started doing a lot, and it’s been very popular, is doing a practice preset. Players come in to shoot hoops, and they just want to connect their phone to something. We give them a Bluetooth connection. They recall a practice preset, and that practice preset might boost the bass a little bit, but it’ll put a hard limit, so we don’t have to be worried about anything getting blown out.”

The overriding key in all of this comes back to customization.

Says Norton, “I’ll talk to the athletic director and say, ‘Okay, what do you want out of sound?’ A lot of times they’re going to say, ‘Oh, you know, I just want this.’ But some of them are going to be, ‘Hey, we rock out here. I need a system that’s gonna rock out.’ And I’m like, ‘I can give it to you.’ ”

When asked if state-of-the-art sound design cues emanate from the professional sports level, Norton offers a different take. “I think the university side sets the standard, and that trickles up to the pro level,” he says. “And then it also goes down to the high school level, because some schools have a lot of money, and they put it toward a new video board or a new sound system.”

Regardless, his goal for high school gyms is always the same. “I want that voice-of-God sound,” Norton says. “I want to make that high school experience feel like a college experience.” 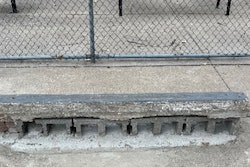 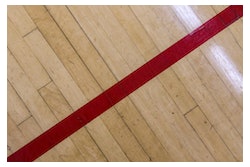