This week's AB Extra features new plans for an abandoned outdoor stadium in Miami, the reopening of the 'world's most dangerous theme park', and a classy move by the Baltimore Orioles regarding the cancelled and rescheduled games due to protests in the city. Happy Friday!

From Tom Brady to '#TomShady' 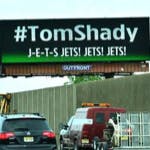 While some thought Tom Brady's four-game suspension for his role in "Deflategate" was too harsh, Jets fans are taking advantage of the situation and put up a billboard on the New Jersey Turnpike with the phrase '#TomShady.'

Patriots fans, on the other hand, are not taking the suspension and other penalties lightly. In addition to Brady having to sit out the first four games of the season, the team was fined $1 million and will lose two draft picks in the coming years.

Brady's suspension was on the basis of "conduct detrimental to the NFL" and was put in place after attorney Ted Wells released a report on the investigation into the scandal. In the report, Wells accused Brady of being "at least generally aware of the inappropriate activities."

Brady appealed the suspension on Thursday and NFL commissioner Roger Goodell will rule on the appeal. 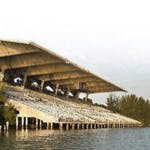 The city of Miami wants to restore its Marine Stadium in order to revitalize the area and draw tourists to the park. The stadium is situated on a waterfront and has played host to boat races as well as rock concerts.

According to city manager Daniel Alfonso, the city has started the process of finding an architecture and engineering firm to complete the project.

The stadium has been out of use since Hurricane Andrew struck the area in 1992 and despite efforts by the Friends of Miami Marine Stadium group to restore the stadium, no plan was ever agreed upon and the city took matters into its own hands.

The city now faces a legal battle over renovation plans with the nearby Village of Key Biscayne, which does not want crowded events associated with the stadium hosted on the one small road going in and out of their village.

Miami commissioner Francis Suarez is an avid supporter of the renovation plans, but questions how the city will find a private operator to run the stadium during a time when the city is facing legal issues associated with it.

However, Suarez does not plan to give up easily on restoring the Marine Stadium. “It’s a jewel,” he said. “And we ought to save it.” 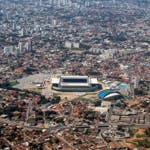 The World Cup concluded almost a year ago in Brazil, but the country is still facing financial problems due to how expensive the stadiums used for the event were to build and the stadiums' current lack of use. The most expensive of the stadiums built cost $550 million and is situated in Brazil's capitol, Brasilia. It is currently being used as a parking lot for buses.

Another one of the stadiums, located in Cuiaba, cost $215 million to construct and has encountered several issues since the World Cup ended, including being closed down due to faulty construction, as well as homeless people living in the unused locker rooms.

The most problematic issue associated with World Cup construction is that multiple high-ranking officials are currently under investigation due to the lack of construction on a railway that was supposed to be completed in time for the World Cup, but has yet to be finished. The $800 million railway was intended to link the city of Cuiaba to the airport, and of the 14 miles that were supposed to be constructed, only about half a mile has been built.

These financial problems and scrutiny come at a poor time for Brazil, as the country is set to host the 2016 Summer Olympics next year. So far, projects for the Olympics are over budget and behind schedule, but residents hope that the Olympics will leave behind a positive legacy for the country, unlike the World Cup. 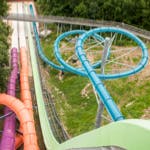 Action Park in Mt. Vernon, New Jersey will reopen its doors to visitors after being shut down since 1996. Before its closure in 1996, the theme park had garnered several nicknames including "Traction Park" due to the number of serious injuries that occurred at the park, as well as "Class Action Park" after six deaths at Action Park led to a number of lawsuits.

The six deaths at the park included an electrocution during a kayak ride, a drowning in the wave pool, and a heart attack in extremely cold water. Visitors reported that the pools were too shallow for diving and the wave pool's suction draft was too strong for many people to handle.

After an online film about the park recently went viral, Andy Mulvihill, the son of the original park's owner Gene Mulvihill, decided to reopen the park to guests. In order to meet current safety standards, some of the rides have been adjusted.

According to Mulvihill, people generally expressed positivity towards Action Park and had fond memories of their time there. “The overall conclusion that the people who went to Action Park have is that it was a phenomenal place,” he told the New York Post. “I don’t get approached by people telling me what a terrible place it was. The strength of that passion far outweighed the negative things.”

Take a glimpse at the old Action Park in an original commercial for the theme park. 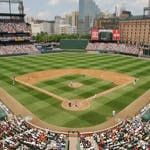 The Baltimore Orioles announced Wednesday that they will pay hourly workers for the games they were not able to work due to the protests over Freddie Gray's death in the city.

The team released the following statement about the situation:

"Due to the extraordinary circumstances that led to several cancelled or rescheduled games, the Orioles organization will compensate all hourly employees for hours that would have been ordinarily worked the week of April 27."

Delaware North, the company that provides concession services for the Orioles, will also pay their concession workers for the missed time.

Check out the news you might have missed from previous weeks in the AB Extra:
May 8
May 1
April 24