In May, shovels broke ground at the University of Minnesota for the 145,000-square-foot expansion of the University Recreation Center, built in 1993. 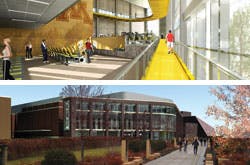 In May, shovels broke ground at the University of Minnesota for the 145,000-square-foot expansion of the University Recreation Center, built in 1993. Designed by the St. Louis office of Cannon Design in association with Minneapolis-based Studio Five Architects, the $59 million multilevel expansion will effectively double the size of available program space. Additions will include a new entrance with a cafÃ© and student lounge, a new fitness center, a group cycling room, locker rooms and an outdoor recreation center with a climbing/bouldering wall. The second level will include five multipurpose rooms and a direct connection to the existing recreation center's atrium. A two-court MAC will occupy the fourth floor, and office spaces will occupy a portion of the building that will appear to float above a prominent public plaza where important campus pedestrian paths converge. The project is expected to be complete in the summer of 2013. 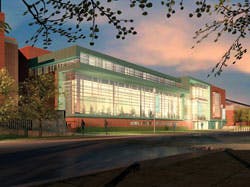 The Moorestown, N.J., town council has gotten its first look at a proposal for a $19.3 million municipal complex that would include a recreation center, a library, a police station, a municipal courthouse and town administrative officesâ¦

The Provo, Utah, municipal council has approved a $39 million bond to fund the construction of a recreation center that will include a natatorium, a walking/jogging track, a fitness center, group exercise studios, basketball courts, childcare space and a senior centerâ¦

Texas A&M-Corpus Christi has selected an architect to begin work on the Momentum Sports Complex, which will include softball and baseball parks, as well as a track and soccer complexâ¦

A $20 million gift from the Moody Foundation has spurred a $40 million renovation of Southern Methodist University's Moody Coliseum. The project will provide the venue with premium seating, courtside retractable seating, a new lobby and concourses, updated suites and numerous technology improvementsâ¦

After investing nearly $120 million in athletic facilities over the past 10 years, Clemson University is moving forward with an additional $50 million in upgrades. The plan includes a $10 million indoor football practice facility, a $15.3 million addition to the football stadium, a $5 million baseball stadium addition, a $5.1 million second basketball practice facility, $6.1 million in soccer complex renovations, $5.1 million worth of tennis facility improvements and the continuation of a $2.6 million golf facility project. 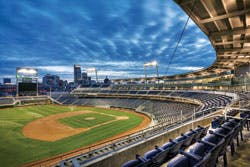 Part of an agreement that will keep the College World Series in Omaha through at least 2035, TD Ameritrade Park Omaha officially opened in April when its primary tenant, the Creighton Blue Jays, fell to Nebraska in front of a sellout crowd of approximately 22,000. Replacing historic Rosenblatt Stadium as host to the CWS, the $131 million stadium is located on a downtown site adjacent to the Qwest Center arena and convention center. Entrance plazas at each corner of the stadium allow for street-level ticketing and administrative offices, as well as team clubhouse facilities. The stadium also features an open, 360-degree concourse with a large Fanfest gathering area and retail areas that boast views to bullpens or the field. 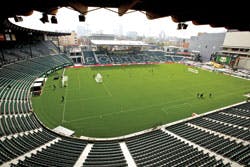