Facility Madness 2014: The Best Arena in College Basketball Is...

Congratulations to Pinnacle Bank Arena, the winner of the 2014 Facility Madness tournament. The beautiful new arena, home to the Nebraska Cornhuskers men's and women's basketball teams, takes home the crown after amassing more than 50,000 votes throughout the tournament.

About the Facility:
The $179 million arena was the cornerstone of Lincoln's $344 million West Haymarket Redevlopment Project. It opened in 2013 and has a capacity of 15,147 for basketball. "With its combination of concrete and metal panel facade, spectacular open-air roof deck, contemporary glass-encased entrance and concourse offering picturesque views of the State Capitol, Pinnacle Bank Arena is an architectural embodiment of aesthetics and modernity," the arena's website states. "Encompassing 470,400 square feet and costing $179 million, the state-of-the-art multi-purpose arena will offer year-round entertainment, including concerts, family shows, touring acts and sporting events."

The modern feel and amenities were enough to win over Facility Madness voters as Pinnacle Bank Arena knocked off Butler University's Historic Hinkle Fieldhouse in the championship round.

See more photos of the arena below, via @HuskerHoops on Twitter. 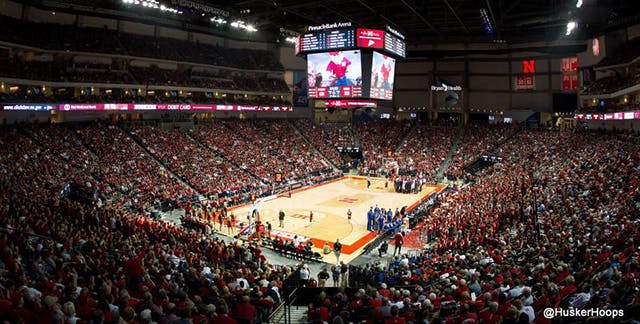 Thank you to everyone who voted in Facility Madness 2014!