This is What Hockey at Levi's Stadium Will Look Like 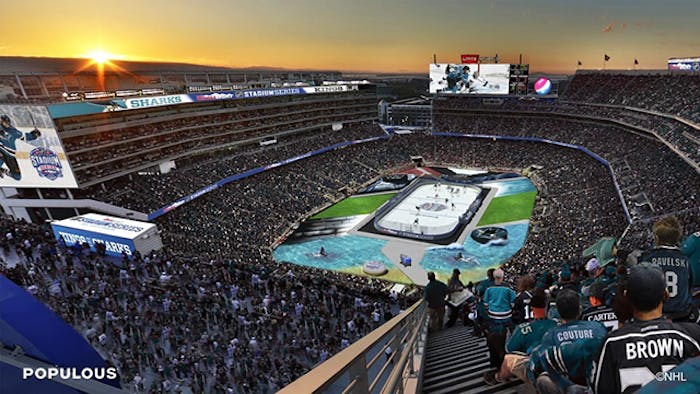 Outdoor hockey in California may not seem like a natural fit, but that's exactly what will take place next Saturday. The San Jose Sharks and Los Angeles Kings will head outdoors and take the ice at Levi’s Stadium for the 2015 Coors Light NHL Stadium Series. The league released a rendering on Thursday of what the stadium and rink will look like come game time. Design elements are aimed at paying tribute to the extensive topography of northern California.

Outdoor games have been a huge success for the NHL since they began during the 2003-04 season, with an average of 56,000 fans attending each game. This will be the first outdoor NHL game hosted in northern California, where average temperatures this time of year range from 50 to 60 degrees Fahrenheit. The location of the game brings up some logistical considerations such as how ice will remain solid in such temperatures. However, between the league’s experience with last year’s outdoor game at Dodger Stadium and the innovative technology at the newly constructed Levi’s Stadium, there are few concerns about what the condition of the ice will be when the puck drops at 7 PM (PT).

The history of these two teams goes far back. No two NHL teams have faced each other more than the Sharks and Kings, and recent playoff match ups have only added to this rivalry. As the teams take the ice on the 21st, and with this being the Sharks’ first outdoor game, fans will experience an exciting game in a distinctive setting. Sharks chief operating officer John Tortora predicts that this game will be “one of the biggest sporting events the Bay Area has ever seen.”

Opened on August 2, 2014, the $2.1 billion Levi’s Stadium boasts some impressive credentials including seating for 68,500, 170 luxury suites, and a green roof on the west side suite tower. It is the first stadium in the U.S. to reach LEED Gold Certification as new construction, and should be an outstanding venue for this game of the 2015 Coors Light NHL Stadium Series.