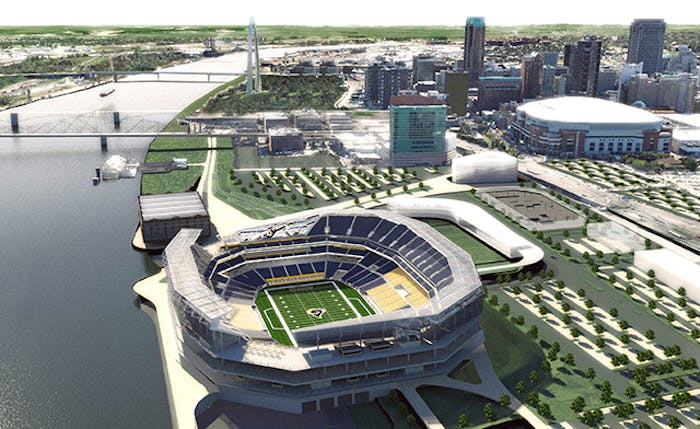 Missouri isn't letting the St. Louis Rams move to Los Angeles without putting up a fight. The state's task force for keeping the NFL franchise unveiled a new set of renderings on Monday for a riverfront stadium with an estimated cost now at $985 million. HOK produced the renderings.

Gone are the large light towers and square video boards of past renderings. In comes lighting in line with the profile of the stadium, uniquely shaped video boards, green space added to the sprawling parking lots and what looks like a nearby practice field. A few nearby buildings have even been deemed important enough not to be bulldozed.

The video boards would be six times larger than the ones in the Edward Jones Dome, the current home of the Rams, which can be seen in the background of the rendering (above). The lighting in the new stadium, which would be added seamlessly to the lip of the facility's roof, comes in response to a request from the Army Corps of Engineers, which was afraid of bright lights distracting captains of boats on the Mississippi River. 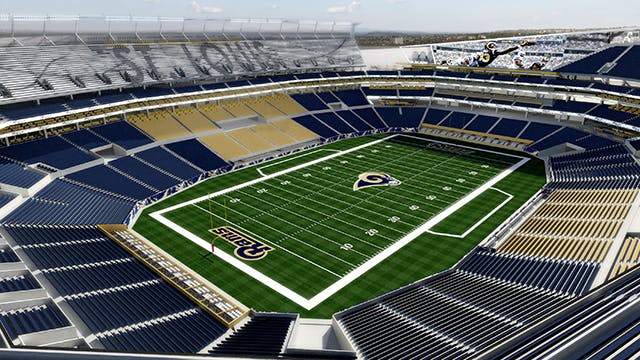 As the St. Louis Post-Dispatch reports, the stadium plan, meant to persuade Stan Kroenke not to move the team to L.A., would not be built if the team doesn't commit to staying in St. Louis.

The proposed stadium site currently consists of mostly unused space. The St. Louis Post-Dispatch says the 35 square blocks "are striking in their emptiness." However, there are a few businesses, important rail lines and giant power lines that would have to be moved. Those costs would be included in the nearly $1 billion total cost. According to the Post-Dispatch, financing would come from the following sources:

That $350 million is the big piece, obviously, but what exactly “extension of the Jones Dome bonds” means remains a bit of a mystery. The Post-Dispatch describes it as like refinancing your house: You go to the bank, take out a new loan, use it to pay off the old one, and sink whatever’s left over into a new project. (For you, maybe new cabinets for your kitchen; for St. Louis, a whole new stadium.)

Meanwhile, Rams' owner Kroenke's proposed stadium on land he owns in Inglewood, Calif., about 10 miles from downtown L.A., was deemed a potential terrorist target in a new report. A report commissioned by the developer of a downtown L.A. football stadium warns that a rival project nearby could be a terrorist target because of its proximity to Los Angeles International Airport.

The report was commissioned by Anschutz Entertainment Group, which hopes to build a football stadium in downtown Los Angeles.

The report by former Homeland Security Secretary Tom Ridge finds that constructing an 80,000-seat stadium in Inglewood — as close as 2.5 miles from an airport runway — "materially increases the risk of a terrorist event."

Ridge concluded that in a world in which terrorism is a recognized threat, "the peril of placing a National Football League stadium in the direct flight path of (the airport)" ... outweighs whatever benefits it would bring over its lifespan.

The Hollywood Park Land Co., which is developing the Inglewood site, declined comment.

The competition for a stadium in the country's second biggest market is heating up. In late February, the San Diego Chargers and Oakland Raiders announced they were exploring the option of a shared stadium in Carson, Calif., about 15 miles from L.A.

Is it only a matter of time before one (or more) NFL teams call L.A. home? Or is all this talk just leverage for new stadiums in their current cities? Stay tuned.