Brian Mirakian had never seen anything quite like it. He was among 18,000 people packing New York's Madison Square Garden to witness teams of video gamers compete in the 2015 League of Legends World Championship Semifinals.

"It was one of the most eye-opening experiences, because when you go to one of these events, the fan passion, the fervor, the excitement around what's occurring during the game action is on par with anything from a traditional sporting event or rock concert," says Mirakian, a principal in the Kansas City office of architecture firm Populous. "When I saw that in person, it was really an 'aha' moment — 'Okay, we have to take this seriously, not only as a competition and a form of entertainment, but as an opportunity to create purpose-built venues in the future that help propel the sport.' "

But nothing brings the numbers like the League of Legends World Championships. In 2016, the LoL final drew 43 million cumulative viewers, 12 million more than watched Game 7 of the NBA Finals that year. "That's the spectacle of esports. That's very much where it blows you away," says Jacob Wolf, one of five staffers dedicated to esports coverage at ESPN.com, adding that not even our national pastime can match the allure of the LoL Worlds. "It has more viewers than the World Series, which is just crazy." 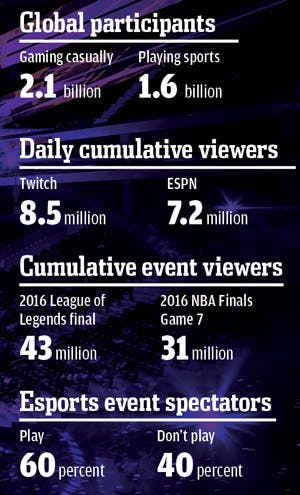 Blurring boundaries
The thought of "sport" involving individuals manipulating consoles while seated in comfy designer chairs may seem crazy to many on the outside looking in, but the industry is undistracted. "That backlash is something that's constant," Wolf says. "It happens every single time ESPN posts an esports article on ESPN's main Facebook page. It's not anything new, and it's not something that esports people are worried about."

And why should they be? Esports is on its way to becoming a billion-dollar global industry. Purses for championship events often exceed those of traditional sports, and investors are lining up. Even traditional sports enterprises are looking for a piece of the action. The NBA will launch an NBA 2K league next year, with 17 of the real league's 30 franchises fielding esports teams. As commissioner Adam Silver described in an ESPN interview in May, "We're taking our existing NBA 2K game and essentially making a league out of it. Every NBA team is ultimately going to be represented, so instead of the Mavericks it will be the eMarvericks, instead of the Bucks it will be the eBucks, and it will be not NBA players but professional gamers — five-on-five basketball in essence, but it will be on a video screen, with avatars, and it's going to be a global competition."

Gamers from around the world will form a draft pool. "As opposed to the NBA, though, where you need to be seven feet tall or possibly six feet tall or even five feet tall, you can be four feet tall in this league," Silver said. "You can be any sex, shape, size, ethnicity, nationality." Players selected will compete in what will likely be a five-month season and earn a full-time salary. It will become the player's job.

The best players are already clocking their own overtime. Professional gamers can spend 20 hours a day honing their skills on one game title, according to Wolf, who says crossover from one title to another — even among pros — is extremely rare. "Yes, it's not a physical training activity, but it certainly is something that requires just as much dedication as a traditional sport," he says. "And it requires mental capacity that most average human beings do not have."

Colleges are starting to court such brainpower. This past March, the Big Ten Conference became the first collegiate sports league to crown a League of Legends champion, with 12 of the Big Ten's 14 member schools sending club teams of six full-time students into the round-robin format. The title contest, won by Maryland over Illinois, was broadcast live on the Big Ten Network.

Penn State was one of the schools absent from the competition, despite having an esports club for seven years. A club press release from January claims school officials "are very protective of their 'brand' and did not have enough time to address us. Because this took place during the Rose Bowl, Penn State was too busy. Penn State's decision stopped our players from receiving a potential $30,000 in scholarships from [League of Legends creator] Riot Games."

Meanwhile, Ohio State, whose victory over Michigan State in a League of Legends exhibition in 2016 paved the way for this year's full-season format, has been quick to see the value of esports. "I don't think all of our students are going to football games," Jim Null, associate director of IT for Ohio State athletics, told The Lantern student newspaper in February. "For some students, it's just not their thing and [this could be] a way to reach out to those students. There might a connection there."

Pac-12 schools are looking at staging a similar league competition, and the University of Utah in April became the first representative of a Power Five conference to announce it will grant varsity status to esports. In all, roughly 700 colleges nationwide have esports club programs, and more than two dozen offer esports scholarships. The University of California, Irvine, has 10 players on scholarship and in September became the first public university to open a dedicated esports facility on its campus. 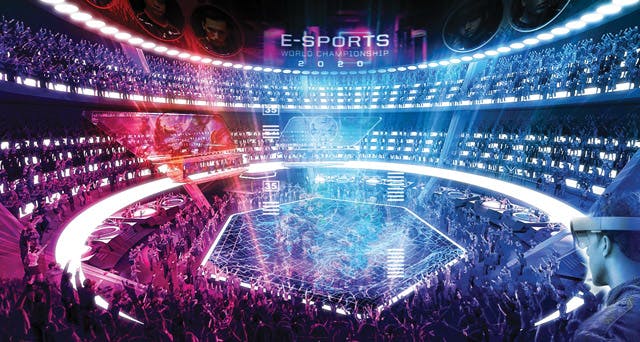 There are a lot of people who pay attention to esports and know nothing about raditional sports, and these NBA teams would like to change that. That’s kind of the gold mine. [Image courtesy of Populous]

Building momentum
Skeptics might wonder why games that don't require participants to even be in the same room would need dedicated spectator facilities, but Populous intends to be at the forefront of gaming venue design, according to Mirakian. "We need to think about ways in which we can help our clients adapt current venues for esport programming," he says, "but also how we can look into the future and think about the day that's not too far in front of us when we're going to be designing purpose-built venues specifically for esports."

Competitions are staged in two primary ways — a center-stage, in-the-round configuration with a four-sided video board suspended over a platform on which teams are sequestered in transparent booths, or a stage-end format with teams located at one end of the facility backed by a wall of video boards. A typical spectator seating capacity could fall within the 1,000-to-8,000 range, according to Mirakian, though the LoL Worlds attendance figures prove much larger facilities can be filled. Designing for the option to go to a half-house scenario is critical, Mirakian adds.

The adaption of current facilities for esports has its advantages. "Upward of 80 percent of the people who are coming into those venues for esports events have never been there before," Mirakian says. "So, on one hand, it's an amazing opportunity, because it exposes the building to a completely latent demographic of people."

That demographic skews younger than the traditional sports fan — between 16 and 30, according to Wolf. "It used to 16 to 25, but people have grown older and stuck with it," Wolf says. "You have the millennials who certainly are interested in esports, and a good majority of them know nothing about traditional sports. Esports are an opportunity to make a bridge."

This, combined with the fact that esports events can run significantly longer than, say, a basketball game, informs the design of dedicated esports venues. An audience captive for the better part of a day requires giving careful thought to concessions, for example, with the availability of alcohol deemphasized in favor of energy drinks and the like, Mirakian says. Esports fans may not be into the premium suite experience, but concourses need to accommodate fan migration and allow opportunities for socializing. There are also the technological requirements — high-density Wi-Fi to allow spectators to stay connected, as well as event-broadcast capability. Special lighting may be incorporated to project gameplay-type imagery on the stage itself, creating a highly dramatized, immersive atmosphere for fans. "It's everything that you would see at a highly produced concert or awards show," Mirakian says. "The arena's dark, and it becomes an emotional, powerful experience."

Ribbon boards, the common sponsorship and fan prompt vehicle in today's sports venues, can play a similar role in esports arenas, with the added function of communicating real-time spectator commentary. "How do you translate the online environment into a live spectator environment? I think that ribbon boards with live chat kind of information is really critical," Mirakian says, adding, "Atmospherically, you want to completely brand and transform the venue to relate to that particular gameplay, almost like a 4-D experience that relates to that particular game." It's an environment that begs for virtual reality technology, as well, Mirakian adds.

Finally, there are the competitor demands. Says Mirakian, "You have to be able to stage the green rooms differently, so when the competitors come in they have places to train in the building and prepare in advance."

Big bang theory
These are certainly boom times for esports, but is the biggest bang yet to come? There's talk of esports gaining Olympic status, perhaps as soon as the 2020 Tokyo Games. Mirakian says he has fielded phone calls on a near-weekly basis over the past year from individuals representing college campuses or NBA or NFL franchises looking to convert existing space or dedicate new space to esports.

"What's most attractive to a lot of these people — and the reason I think a lot of these teams in the NBA are making the jump — is the crossover promotion," Wolf says. "There are a lot of people who pay attention to esports and know nothing about traditional sports, and these NBA teams would like to change that. That's kind of the gold mine. They want more people paying attention to their brand so they can sell more sponsorships, rather than just the fans buying tickets or merchandise. It's really, really smart."

"If you're not a gamer, you watch these events for the first time and you're not exactly sure what all is going on," Mirakian admits. "But you just know that people are extremely passionate about it, and they love the event experience. It's just one of those things where it will continue to grow and popularize and be part of mainstream culture. It's here and it's happening and it's real. And it's going to be exciting to see where it goes."

This article originally appeared in the June 2017 issue of Athletic Business with the title "Leveraging the esports popularity boom" Athletic Business is a free magazine for professionals in the athletic, fitness and recreation industry. Click here to subscribe.