Dancing to the Music of Good Customer Service

Dancing to the Music of Good Customer Service 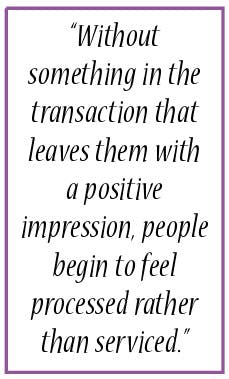 When you opened for business, it was to almost unanimous applause. You got hundreds of curious people to walk in your door, and once there you sold hundreds of memberships for which you were paid in advance.

So, who needs good customer service, right? Why waste your time on a captive audience? Because as happy as they may seem now, people don't need much of an excuse to look for something better.

"Most customers get indifferent service," says Lisa A. Ford, an Atlanta-based speaker who conducts seminars on the topic. "Without something in the transaction that leaves them with a positive impression, they begin to feel processed rather than serviced. Club staff members often act as if they couldn't care less whether club members are being attended to."

And just what are club members looking for, besides a good workout? "They want that sense of 'wow' when they visit the club," says Ford. "They want to be reminded that they are the reason your club is in business."

In other words, they want to be serenaded. Want three steps to keeping them on the dance floor. Read on.

1. DANCE TO THE MUSIC. "Good service starts with the business owner," says Ron Zemke, president of the Minneapolis-based consultancy of Performance Research Associates and co-author of the best-selling Delivering Knock Your Socks Off Service. "You set the tone; you lead the way. If you have a long face, your staff will not be happy on the job. Tell your employees: 'I won't ask you to do anything that you won't see me doing.' " A passion for customer service should be tightly ingrained in the fiber of your being, because the owner's attitude toward service is catching.

You should demonstrate good customer service first, then direct your staff to watch what you do and emulate your attitude and actions.

2. NAME THAT TUNE. Be specific when you communicate your concern about serving the public. "If you want people to do something, you need to make sure they know what it is," says Zemke. "And you need to keep reminding them. People are too busy dancing to pay attention to choreography. Come up with a dozen points that define what you mean by good service, then review them with every employee."

Describe the environment you want, suggests Zemke. "Here's one thing no one talks about: What do you want it to feel like to be a member of your club? Do you want people to feel smothered with attention? Elegant? Elite? Do you want a homey, friendly environment? You have to be able to describe to your staff exactly what you're shooting for." This approach is more comprehensive than just complimenting individuals for good work. "Without larger principles to keep in mind, people will still feel like rats in a maze," says Zemke. "Explain what their actions look like to your members."

Zemke suggests starting each day with a recap of what went well or not so well the day before, and why. Then discuss one of your service principles again. "Find a new way to talk about it every time you bring it up," says Zemke.

Coaching can iron out the service wrinkles in your staff, according to Ford. "As an employee, the sooner I see an opportunity for improvement the better off I will be," she says. "The worst thing is to let poor behavior go on too long. Challenge people to better themselves." Let the staff member know what you have seen, ask for specific changes in behavior and name a deadline. Then recognize progress and reward the person.

Setting standards for your staff may be great, but avoid putting them in straightjackets. Let them express their natural personalities. Maybe your own approach is to smile broadly right away, and that may work great - for you. Another person may come across as more natural by approaching members in a businesslike, straightforward way, then warming up gradually as the conversation proceeds. You don't want members to get the idea that your staff is faking things.

3. EVERY SONG A DUET. In too many service businesses, staff members seem lost in their own worlds and customers feel abandoned. In a service-charged business, employees sing duets with patrons.

"Engage each customer in conversation," suggests Bob Janet, a marketing consultant based in Matthews, N.C. For example, if you see a member puzzling over a piece of exercise equipment or studying a schedule of aerobics offerings, that can be an indication that he or she might need more than just a quick fix. "Too often, asking 'Can I help you?' elicits a 'No,' " notes Janet. "More specific questions - in this case, offers of help with other equipment or suggestions of other classes - can be the start of a good conversation." Good conversation means good listening, he adds. Avoid the temptation to leap in with an answer before you thoroughly understand what the customer says.

You want the audience to speak up when your service song goes off-key. Most people, though, avoid complaining, either because they feel club owners don't care or because making a stink is too much trouble. Your job is to resolve bad feelings before you lose the member. "Encourage members to complain so you can solve any problem your club created," says Janet. Set up some system such as service report cards or a highly visible suggestion box for feedback from these individuals. "Later, call members who complain of a problem to ask if everything has been resolved to their satisfaction," Janet says. "Send members who suggest a change in the way you do business a handwritten thank-you note."