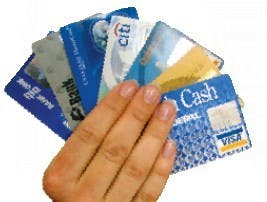 If you're like most business owners, you want to satisfy your customers by accepting their preferred forms of payment. One such form is the debit card, a financial vehicle that has grown in importance while causing lots of heartburn for businesses. The big problem has been the hefty fees that card companies have charged to accept signature-based debit cards.

The lawsuit claimed that the card companies' so-called "honor all cards" rule was unfair in forcing businesses that accepted credit cards to also accept signature-based off-line debit cards, which are significantly more expensive to process and more prone to fraud. As the lawsuit noted, the card companies were actively promoting the use of such off-line cards. The impetus was financial: The card companies have been collecting an average of $1.35 per $100 purchase made with these signature-based cards, compared with only 13 cents per $100 purchase when made with an online PIN-based debit-card transaction.

The settlement calls for a huge payout to businesses: $3 billion over a 10-year period.

Will you be affected directly by the settlement? Most likely. "This is a class-action suit in which virtually anyone who accepted debit cards over the past 10 years is a member," says Kent Jarrell, a spokesperson for the claimants and an account executive at Apco Worldwide, a Washington, D.C.-based public affairs agency. "We're talking about more than five million businesses."

Your first benefit will be a receipt of your portion of the settlement funds. By the end of this past summer, you should have received a letter in the mail detailing the award. At first blush, that mailing - considering the millions of letters required by the settlement - may seem an impossible task for anyone to accomplish, but the card companies made their databases available for mass mailings to the affected businesses. There were also public notices in national newspapers detailing how to get in contact with Apco Worldwide.

While the agreement calls for payments to be spread out over 10 years, Jarrell says that attorneys are busy attempting to arrange for lump-sum payments to be made some time in 2004. "Writing only five million checks instead of 60 million is a good thing for business owners, because it cuts our administrative costs that come out of the fund," says Jarrell. "It will save more than $100 million in expenses."

The average business will receive just a few hundred dollars under the settlement, according to Lloyd Constantine, an attorney with Constantine & Partners, the law firm representing the businesses. (Relevant documents, including the Memoranda of Understanding between the businesses and the bank card companies, are posted at www.cpny.com under C&P News/Debit Case Settlement Information.) The formula was still being worked out as this was being written, with amounts being calculated based on figures in the card companies' databases. If you disagree with the resulting figures, you may take action. "There will be an easy way to appeal by coming up with your own records," says Jarrell.

The cash settlement is only the first benefit to be gained from the court settlement. Additionally, very shortly it will be much cheaper to accept debit cards. "Both MasterCard and Visa have agreed to drop the interchange fees on debit cards by at least a third," says Jarrell. And issuers will need to mark their debit cards with the word "Debit" or "Check Card" or equivalent term. This will make it easier for your front-desk staff to identify such cards at the register.

In addition, starting Jan. 1, MasterCard and Visa will set new rates for accepting debit cards. "At this point, you will have a choice as to what to do," says Jarrell. "If you believe the card companies are setting unacceptably high fees, then you can stop taking debit cards and only accept credit cards." Alternatively, you may decide to accept only the type of debit card that has a PIN number. As previously mentioned, such cards are faster to process and less prone to fraud than signature-based cards.

One more thing: You will likely benefit from the greater competition that results when other bank networks get into the debit-card field. This has been spurred along by the card companies' consenting to cease negotiating debit-card exclusivity agreements with banks. More companies may now make a bid for your business. Even American Express and Discover could start issuing debit cards. All this activity may cause Visa and MasterCard to adjust their charges to the realities of the competitive marketplace.

"We may see wider acceptance of small and regional-bank ATM debit cards that are PIN based, says Biff Matthews, president of Supply Department, a Heath, Ohio-based vendor of electronic transaction equipment. These companies can send their transactions directly through their bank networks, and, Matthews says, "the cost is pennies." The greater competition means businesses will be able to choose which cards they will take, balancing customer choice against lower-cost alternatives.

Certainly, the costs of the settlement will have to be made up somewhere. "The banks are going to have to find another source of income," Matthews points out. "It could end up meaning an increase in fees for card holders as the banks scramble to recover income."

Whatever the long-term benefits and drawbacks of this major court settlement, it's up to you to watch out for your short- and long-term interests. Make sure you collect the funds due you for the debit-card transactions you have honored to date. And shop around for the best debit-card deal beginning in January.