Policies for HIV-Infected athletes must be developed with care. 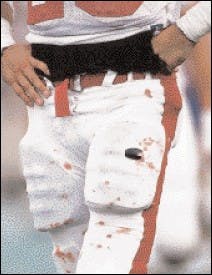 In developing policies to minimize the admittedly small risk of HIV transmission during an athletic contest, athletic administrators need to consider a variety of factors including the current medical evidence concerning the spread of HIV and the risk an infected individual represents to other participants. Knowledge of laws protecting individuals with disabilities is also vital to this task, although it is becoming clear that athletic administrators can't afford to wait for the courts to provide guidance in this area.

The issue of whether individuals infected with HIV would be covered under federal law was first argued in Thomas v. Atascadero Unified School District [662 F. Supp. 376 (C.D.Cal. 1987)], in which the parents of Ryan Thomas, a five year-old infected with HIV, sought a preliminary injunction against the school district to allow their son to attend regular kindergarten class.

In granting the injunction, the district court held that individuals infected with HIV suffered impairments to their physical systems that significantly impaired their major life activities and were therefore handicapped individuals covered under Section 504 of the Rehabilitation Act of 1973. The court also held that Ryan was "otherwise qualified" to attend school and that he was being excluded solely because of his handicap. Finally, the court looked at the risk of allowing Ryan to attend school and found that "any risk of transmission of the AIDS virus by Ryan in connection with his attendance in regular kindergarten class is so remote that it cannot form the basis for any exclusionary action by the school district." The court concluded that the Rehabilitation Act conferred statutory protection on individuals infected with HIV.

The Thomas decision was quickly followed by Ray v. School District of DeSoto County [666 F.Supp. 1524 (M.D.Fla. 1987)], in which the parents of three HIV-infected boys sought a preliminary injunction to allow their children to attend regular public school. As in Thomas, the Ray court granted a preliminary injunction but, interestingly, it specifically prohibited the boys from participating in contact sports because of the possibility of blood spills or the exchange of other bodily fluids.

Although both these cases were decided using Section 504 of the Rehabilitation Act, a number of courts have placed individuals with HIV within the protection of the Americans with Disabilities Act of 1990. For example, the court in Doe v. Kohn, Nast, and Graf [862 F.Supp. 1310 (E.D. Pa. 1994)] found that so long as an employee's HIV status did not pose a direct threat to co-workers, and he was otherwise qualified to perform the job, the ADA would provide him protection from discrimination based solely on his HIV status.

It is important to note that even if a plaintiff is able to prove all the elements necessary to establish a prima facie case under ADA, the courts will uphold discriminatory practices if permitting an individual to participate in an activity would pose "a direct threat to the health and safety of others." Most professional sports leagues (boxing is a notable exception) and the NCAA have developed guidelines for competitive events wherein play is immediately halted when blood is noticed on a player or jersey. (The bleeding player must leave the game until the wound has been treated and covered, and any blood-stained jerseys have been either disinfected or replaced with clean ones.) If it could be shown that an athlete infected with HIV posed a direct threat to the health or safety of other participants even after such guidelines had been enacted, sport associations would be justified in excluding him or her from participation.

Although most infectious-disease authorities agree that the risk of HIV transmittal during a game is small, most also admit there is at least a possibility of transmission in certain conditions. Because of this, athletic administrators must make some critical decisions about how best to protect their athletes. To illustrate some of the issues involved, imagine a high school or college athletic director who knows of athletes competing for the school who are HIV-positive.

The first question an administrator should ask is whether the athlete poses a direct threat to the health and safety of others.

To determine this, the Supreme Court, in School Board of Nassau County, Florida v. Arline [480 U.S.273, at 288 (1987)], a case involving not HIV but tuberculosis, considered a four-part test to be used when examining exposure to a contagious disease:

If the athlete does not pose a significant risk to other participants, he or she should be allowed to play.

The unfortunate reality is that deciding whether or not to allow an HIV-infected athlete to participate is often as much a matter of the athletic administrator's fear of transmission as it is the statistically small chance that transmission will occur. When considering denying an athlete the opportunity to participate, administrators must be careful to base their decision on reasonable medical judgment rather than on speculation.

Current medical information about HIV transmission indicates that only athletes involved in high-risk activities pose any risk. While athletics in general might not be considered high-risk, an athletic director needs to consider whether certain sports (wrestling, for example) pose a greater risk of transmission than contact sports such as basketball, football or hockey - and therefore, whether certain sports require special regulations.

A final question an administrator might ask is whether there are any reasonable accommodations that could be made to eliminate the risk of transmission to non-infected athletes. Since both Section 504 and ADA require that reasonable accommodations be made to remove barriers that hinder the participation of handicapped individuals, any minor changes that can be made to the activity that would allow infected athletes to participate clearly must and should be made.