"Party Passes" at Cowboys Stadium could irk some high-paying partiers. 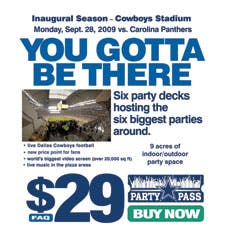 National Football League stadium seating is sold, and sold at a premium, on the idea that there is almost limitless demand for a finite number of seats. Thus there might have been some Dallas Cowboys season-ticket holders experiencing buyer's remorse when, late this summer, the team began selling $29 "Party Passes" in its new $1.1 billion Arlington home.

Standing-room-only tickets traditionally are made available after all seats sell out; newer Major League Baseball venues such as Jacobs Field and Oriole Park at Camden Yards were designed with an outfield balcony and two street-side pavilions, respectively, for just this purpose. Packing in more fans has no real downside in such circumstances. More fans means more revenue, and the narrow gap in price between a standard MLB ticket and a standing-room ticket - and the poor view afforded latecomers - guards against a backlash among those who paid to sit.

The situation with regard to the NFL in general (and the Cowboys in particular) is different. Fans in the end-zone portions of the new stadium's upper deck, with essentially the same view of the field and video screen as that enjoyed by standing patrons on any of the stadium's six party decks, paid as much as $4,000 for a personal seat license and $890 ($89 per game, including two preseason contests) for a season ticket. Although the team's web site and press releases have drawn parallels between the stadium's party decks and the infield at Churchill Downs or Texas Motor Speedway, fans in the grandstands at those two venues clearly have a view of the action that fans down below don't.

And although the stadium wasn't quite sold out for the season when the new price point was introduced, it is worth noting that the team waited until 18 days before the first preseason game to offer fans the option.