Tweaks, New Initiatives Change What It Means To Be Fit in the Armed Forces

Tweaks and new initiatives change what it means to be fit in the armed forces. 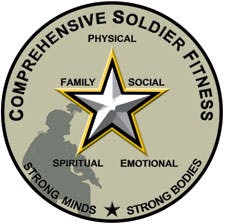 FIVE STAR The Army's new initiative focuses on what it calls

A year of alterations to the Armed Forces' various physical fitness tests has been met with some applause, some consternation. The shared view is that, at the least, the recent activity demonstrates the greater care being taken across the services to address some longtime gaps in the military's notion of fitness and readiness - and, in one case, to move beyond the purely physical to embrace a more holistic approach to military fitness.

The Air Force began expressing concern about elevated body weight among active-duty service members as far back as 2006 - what it termed in the medical literature, amusingly enough, as a "substantial and growing problem." In addition, an internal audit determined that the USAF's "Fit to Fight" effort (the branch's 2004 fitness update in which, among other things, the bike test was scrapped) could more accurately be described as "fit to test," a problem made more acute by cheating uncovered by auditors. Seventeen percent of personnel who had just completed the PT test, it was found, had waists at least three inches larger than their official measurement.

The branch's response was to leave the particulars of the test alone (it still consists of a 1.5-mile run, a waist measurement, push-ups and sit-ups) but change the manner in which the twice-a-year test is performed and scores are tallied. The decision to remove fellow airmen and women from the administration of fitness assessments and the recording of tests - these are now performed at a centralized location under the watchful eyes of civilian fitness experts - has rankled many airmen and women, as has the refusal of the USAF to take into account height and age when quantifying the assessments. Others have questioned the continued lack of a combat fitness component (the basis of the "Chair Force" reputation that the branch has suffered in years past) at a time when both the Marine Corps and Army have added this to or are in the process of developing this for their services' tests.

Air Force personnel were thrown a bone, as it were, in the form of a wider standard for waist measurement; in a nod to the body-size increase in the general population, the maximum waist measurement needed for a perfect score is now 35 inches for men and 31.5 inches for women, up from 32.5 and 29 inches, respectively. Also, the team of 30 service officials and fitness experts who oversaw the changes were concerned that the USAF's fitness program as it was previously configured "did not effectively promote a healthy lifestyle." Changes to the scoring matrix thus will give personnel greater incentive to make incremental improvements to their fitness levels.

The last alterations to the Army's PT manual took place in 1992, but it's safe to say Army officials are making up for lost time. New workouts approved last year, which are designed to support soldiers through the yearlong deployment cycle, are aimed at mission-specific conditioning rather than simply preparation for the semi-annual Army Physical Fitness Test. That test, of sit-ups, push-ups and running, features the same skill set as when it debuted in 1980, but the new battle-ready regimen - drills that approximate warrior tasks, such as a 50-yard dash in full battle gear ending in a jump over a low wall - will have many benefits beyond satisfying PT test requirements, Army officials say.

But the Army is also making a truly groundbreaking addition to its testing protocol. As of Oct. 1, active-duty reserve and National Guard soldiers are required to take a test that seeks to assess their spiritual, emotional and physical well-being. The so-called "resiliency testing" was a direct result of an uptick in suicides among soldiers, from 115 in 2007 to 128 in 2008 to 88 in the first half of 2009. "It was developed because we recognized that we really did not have a good preventive and strengthening model for psychological health," Brigadier General Rhonda Cornum, who is overseeing the program, said in an August press conference announcing the Comprehensive Soldier Fitness program.

The CSF was originally prompted by Joint Chiefs of Staff Admiral Mike Mullen, who sent a colonel to seek advice from Martin Seligman, head of the positive psychology center at the University of Pennsylvania, about how to help soldiers returning from combat. Cornum, the Army's assistant surgeon general for force projection, survived her own harrowing ordeal - a helicopter crash and several days of captivity - during the first Gulf War in 1991. Her recommendation to the Army was that it "evaluate comprehensive fitness as aggressively as it does physical fitness," and so, just as the service grades physical health along an axis, scores are now being tallied for mental and emotional capacity, using self-evaluation questions derived from Seligman's 20 years of research into "positive psychology." CSF focuses on what it calls "five dimensions of strength" - Physical, Emotional, Social, Spiritual and Family - and attempts to quantify levels of resilience, adaptability, self-confidence and agility. The program, the Army says, "will ensure that all soldiers undergo an assessment of their total fitness. The results of the assessment will direct individualized training, intervention or treatment programs, as needed." Possible stress-relief training would involve various psychological therapies and could also include physical exercise and such physical/meditative pursuits as yoga.

Soldiers following up their push-ups and sit-ups by answering questions such as, "How often do you feel left out?" represents a major cultural shift, but early indications are that all ranks are welcoming the change.

"Being 'Army Strong' is, in fact, being more than just physically fit," Cornum said in introducing the program. "A lot of it's in your head."