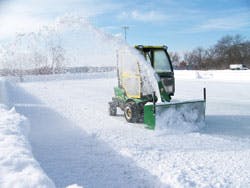 As with most successful community efforts, the Adopt Ice program run by the Madison, Wis., parks division was catalyzed by a small group. A handful of parents approached the city last February and expressed a desire to help maintain a city-owned outdoor rink in their neighborhood, in order to both extend the skating season and maintain higher-quality ice for their hockey-playing children.

"That first flock of volunteers was made up of some folks who have a real passion for the sport," explains Steven Doniger, the division's community services manager. "We thought maybe we could channel the energy from that group into a bigger program, and then we can ensure that people are doing things the right way, they're being safe and they're not causing any damage to our facilities."

To that end, the city sent out press releases and bought print ads to promote the program and recruit volunteers to help care for its four small neighborhood rinks and three larger "destination" rinks. The response, says Doniger, was anything but frigid, as upward of 80 people collectively attended introductory neighborhood meetings. "Candidly, that greatly exceeded our expectations," Doniger says. "Especially with some of our smaller rinks, just a handful of people would have made an impact. But we realized we'd be able to have a nice network of people who want to be involved."

Though new in Madison, adopt-a-rink programs have been in place in cool-weather climes throughout the United States and especially Canada for years - not to say that maintaining their momentum from one skating season to the next is an easy feat. For starters, the effort to recruit volunteers is ongoing. "It is a challenge," says Dave Young, manager of parks maintenance for the city of Medicine Hat, Alberta, which has run an adopt-a-rink program since the late 1990s. "It tends to be people who have kids that want to skate and who tend to live in close proximity to a park that can provide a rink. They help out for so many years, but then the kids grow up, or maybe lose some interest, and the parents move on."

Medicine Hat starts publicizing the need for volunteers in early fall to gauge interest levels and determine where adopted rinks may be installed. Aside from its permanent outdoor rinks, which feature full-size dasher boards, the city also uses 2-by-6-inch planks to create temporary "low-board" rinks that can essentially be installed on any flat parkland with a nearby water source. Volunteers in the program tend to both rink types.

"We have foremen who will go out to the sites and meet with the volunteers to show them where the water service is, how to flood the rink and how to store all the equipment," explains Young. "From there, for due diligence, we'll go out and check the rinks regularly to make sure that they're safe, that ice is being built and that everything is in working order. We want to make ourselves available to our volunteers when issues do come up."

The meetings also allowed the recreation department to supply waivers for volunteers, and to train them on some basic safety procedures. "We talk a lot about safety and security," says Doniger. "We want to show them that it's never too cold to make ice, but it may be too cold to be outside for extended periods of time. We talk about some really basic things, such as how to lift with your knees and not with your back."

Medicine Hat asks adopt-a-rink applicants to form groups of at least six volunteers per rink. Having a stable of workers naturally reduces each volunteer's workload and ensures that snow removal and ice building can be accomplished on a regular basis, even when some volunteers may be unavailable, a common occurrence during the holiday season. "What we don't want is for a rink to not get looked after for a week or two," Young says. "Basically, more hands make for less work."

That theory certainly applies in Madison, where Doniger expects the Adopt Ice program to reduce overtime hours for parks maintenance staff. "By law, our first priority is community safety," explains Doniger. "Whenever it snows, we've got to clear all the walkways and the bike paths first. Then we can get to our other recreation responsibilities."

With volunteers put in charge of the majority of snow removal from the ice, adds Doniger, parks staff may also have more time to help establish higher-quality ice through additional flooding and scraping. "I think we'll see two things happen," he says. "First, we'll be able to extend the skating season, if only by a couple of weeks; and second, the quality of the ice is going to be better."

Young likewise acknowledges that Medicine Hat's adopt-a-rink program does provide at least minimal savings on recreation staff work hours. "When we implemented the program, we were exploring ways to provide services for the least amount of money possible," he says.

Potential cost savings notwithstanding, adopt-a-rink programs do serve a greater purpose. "None of these facilities are providing revenue," says Young. "It's more about people who are coming together to do some good for their neighborhood or their community."

Doniger likens the programs to old-school neighborhood pick-up baseball games. "It's a great example of the way things were when we were kids," he says. "It's a thing for people to get out and do freelance sports, if you will. That's something that's gone missing a little bit in our communities."