New York City Parks & Recreation Commissioner Adrian Benepe was among those who gathered in December to break ground for Lakeside at Prospect Park. The Lakeside project represents a 26-acre renovation to the historic Brooklyn park. 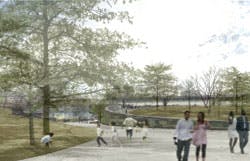 New York City Parks & Recreation Commissioner Adrian Benepe was among those who gathered in December to break ground for Lakeside at Prospect Park. The Lakeside project represents a 26-acre renovation to the historic Brooklyn park. New amenities will include a green building, designed by Tod Williams Billie Tsien Architects, that will support year-round programming, as well as two new outdoor skating rinks that will provide 32,000 square feet of total skating surface. The pad area will support water features and inline activities throughout the warmer months. The $70 million project also includes the ongoing restoration of the original Frederick Law Olmsted and Calvert Vaux landscape design for the park, which dates back to 1866.

The University of New England has received a $10 million donation to build a new 105,000-square-foot athletics complex and to support the university's healthcare workforce programs. . .

A $10 million gift that will support the development of a new multipurpose center has been presented to the Ohio University Foundation. The gift is also part of a $450 million capital campaign that will affect numerous facilities and programs at the university. 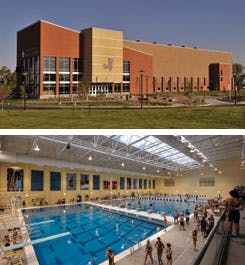 The 52,000-square-foot Veterans Memorial Aquatic Center has opened in Thornton, Colo. Representing a collaboration between the city and the Adams 12 Five Star School District, the competition natatorium will serve students and staff from five high schools and eight middle schools, as well as residents of the community and nearby area. At the center of the facility is a 50-meter-by-25-yard pool with movable bulkheads and spectator seating for 800. Energy-efficient features include solar heating for the pool water, high-performance windows, a daylit two-story lobby, and a continuous, translucent, insulated skylight in the natatorium. UV light and regenerative media filtration disinfect the pool and reduce the need for chemicals.