Following some civil unrest in 2003, the governor of Michigan created a task force to examine how to improve the quality of life and foster economic development in Benton Harbor and the surrounding area. 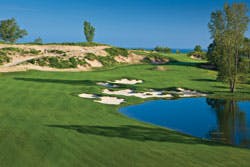 Benton Harbor's "Signature" element for its Jack Nicklaus golf course was the view of Lake Michigan from Jean Klock Park. (Photo courtesy of The Golf Club at Harbor Shores)

Following some civil unrest in 2003, the governor of Michigan created a task force to examine how to improve the quality of life and foster economic development in Benton Harbor and the surrounding area. In noting that the city's underutilized parkland located along Lake Michigan was visited by fewer than 700 people annually, the task force recommended that the city create a golf course and First Tee program that would benefit Benton Harbor residents in conjunction with the presumed influx of tourism.

Harbor Shores Community Redevelopment Inc. saw a Jack Nicklaus "Signature" golf course as the catalyst for a 500-acre commercial and residential development. For the course to warrant the "Signature" designation, it would need a dramatic element, and the element identified for the Benton Harbor course was the view of Lake Michigan from Jean Klock Park. Harbor Shores' plans thus called for three of the course's 18 holes to be located within the park, occupying 22.11 of its 74 acres.

Under the terms of its lease with the city, Harbor Shores entered into a "Park Improvements and Maintenance Agreement" in which it agreed to construct a new park entrance, an updated bathhouse and other new facilities. Harbor Shores also agreed to convey to the city various parcels of land, totaling more than 38 acres, as "mitigation" for the property taken for the course, and further agreed to create a 12.8-mile trail system linking the park with the various mitigation parcels.

Before Benton Harbor transferred its property rights to Harbor Shores, the city presented its initial conversion proposal to the National Park Service in June 2007. NPS, however, rejected the proposal based on its concerns about the scope of control of the park conveyed by the terms of the lease, the lack of a sufficient public-comment period, and the apparent inadequacy of the recreational viability of the proposed mitigation parcels. The city revised the proposal and opened it to further public comment, and then submitted the revised proposal to the Michigan Department of Natural Resources, which recommended approval to NPS. After it concluded that it would not have a significant impact on the quality of the human environment, NPS approved the conversion on July 25, 2008.

Ready to tee it up? Not quite. Because the development required Harbor Shores to fill wetlands, it had a full three years earlier applied to the Army Corps of Engineers for a permit. The scope of the Corps' environmental-impact analysis included development activities directly impacting jurisdictional waters, as well as activities occurring outside jurisdictional waters, such as construction in the park and on the mitigation parcels, the removal of trees throughout the project area, the excavation of fill material from upland facilities, and the operation and maintenance of the completed golf course. Ultimately, the Corps determined that the project would not have a significant impact on the quality of the environment.

That determination was at the center of Julie Weiss v. Dirk Kempthorne, Secretary, U.S. Department of the Interior [683 F. Supp. 2d 549; (2010)], a lawsuit filed by Julie Weiss and a group of local residents living in or near Benton Harbor challenging the development of the course. In its attempt to block the inclusion of the project's public parkland, the plaintiffs argued that:

1) NPS and the Corps failed to prepare an environmental impact statement, as required by the National Environmental Policy Act (NEPA),

2) NPS and the Corps failed to consider practical alternatives in violation of NEPA and the Land & Water Conservation Fund Act (LWCFA), and

3) The transfer of parkland was in violation of the LWCFA, based on use of converted property for professional sports.

In reviewing the plaintiffs' first claim, the U.S. District Court for the Western District of Michigan noted that NPS and the Corps each prepared environmental assessments and determined that an environmental impact statement would not be necessary because the proposed actions would not have a significant impact on the quality of the human environment.

The plaintiffs, however, argued that that determination was made by improperly narrowing the scope of review. In particular, the plaintiffs contended that NPS considered only the effects of development on the 22.11 acres of the park subject to the lease and on the mitigation parcels, when it should have considered the effects of Harbor Shores' entire 500-acre golf course and residential development.

In rejecting this argument, the court held that NPS' authority is confined to properties that are subject to LWCFA jurisdiction, and its approval was necessary only for the activities subjecting the park to conversion and for the mitigation properties. Its jurisdiction did not extend to any part of the golf course outside the park, and did not encompass the entire 500-acre golf course and residential development project. The Corps was responsible for conducting a review of the overall project, which it did. Therefore, the court concluded, while NPS' review focused on one aspect of the golf-course project separately from the whole, considering the combined review of NPS and the Corps, it appeared that all of the relevant effects of the overall project were considered and reviewed.

In also rejecting the plaintiffs' second argument, the court noted that in connection with its review, NPS did consider several alternatives to building three holes of a Jack Nicklaus Signature golf course within the park, including: 1) leaving the park "as is"; 2) not constructing a Signature golf course; 3) locating the golf course to the west side of adjacent dunes; and 4) locating the holes outside the park to the south, west or north. All of these options were rejected, primarily for fiscal reasons.

As for the plaintiffs' final argument, the court held that the "professional athletics" limitation under the LWCFA applies to development projects receiving grant assistance, not land transfers. It stands to reason, the court held, that there is no professional-athletics limitation on converted properties because these properties are to be replaced with other properties of equivalent usefulness for public outdoor recreation. In other words, the effect of a conversion is to free the converted properties from LWCFA-related restrictions. Even assuming that the professional-athletics limitation applied, however, the court found no evidence to indicate that the course had been designed primarily for professional use.

While Weiss may seem to have limited value to most sport and recreation administrators, it actually illustrates a very important lesson: When developing property, it is essential that you are aware of the various laws, easements and other conditions that impact your property.

There are always going to be people unhappy about development, especially if the land has been undeveloped in the past. So, even when you have done everything the law requires, there is a good chance that you could end up in court. Therefore, before trying to build anything, developers and property owners need to make sure that they have followed all the proper procedures and conducted all the proper reviews.