Architect Jorge de la Cal can't definitively say that the new net-zero high school he designed in San Pedro, Calif., is the first of its kind. 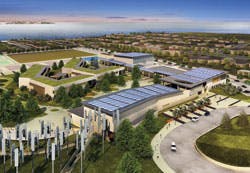 Architect Jorge de la Cal can't definitively say that the new net-zero high school he designed in San Pedro, Calif., is the first of its kind. But he's pretty sure there will be nothing else like it when the 115,000-square-foot facility opens in September 2012.

Los Angeles Unified School District's South Region High School #15, conceived by L.A.-based CO Architects (of which de la Cal is a principal) will hold up to 1,200 students and serve as an annex to nearby San Pedro High School. It is expected to achieve LEED Gold status with its grid neutrality - meaning that the $74 million facility will produce as much electricity as it consumes. More than 32,600 square feet of solar panels covering nearly every possible square foot of roof space, along with 36 bird-safe Vertical-axis wind turbines, will harness the sun and wind. Other sustainable elements include shaded and operable windows, daylighting, highly efficient HVAC systems and air filters, water-saving installations, interior materials featuring recycled content, energy-smart fluorescent lights, and low-emitting ceiling tiles, flooring and insulation.

Not bad for a facility that, according to project director de la Cal, originally wasn't intended to come anywhere near net zero. "Only two years ago, when we took this assignment to design a new school, it was thought 30 percent self-sufficiency was aggressive," de la Cal says. "But with the addition of wind turbines and energy-conservation methods, we began to think 100 percent or more was doable. The site is the biggest factor working for us. It's a coastal site with regular 9-mph winds and good sunshine. And because it's such a moderate climate, the heating bills are already low."

LAUSD officials, who are using money from voter-approved bond measures to pay for most of the school, initially hesitated to spend big on the facility's competition gymnasium featuring a large array of photovoltaic panels and ample daylighting, an outdoor 25-yard-by-25-meter competition swimming pool heated by solar thermal energy and synthetic turf soccer and softball fields that require no irrigation or pesticide. "They wanted to spend their money on classrooms," de la Cal says, adding that the sports facilities will be used primarily for practices but will also be open to the community; games will still take place at San Pedro High. "They initially were a little stingy on athletic facilities. But anything that can reduce the operating costs of something like a pool - LA Unified doesn't typically build pools - really helps."

Believe it or not, not all athletics administrators are aware of the energy costs associated with running sports programs, according to Greg Smith, president of Energy Optimizers USA, a Tipp City, Ohio-based firm that audits, then recommends and executes turnkey sustainable solutions for elementary, middle and high schools. "If a school district has a business manager and a sharp superintendent, I'm sure they have a good idea of how much it costs to run a gymnasium for four hours and power stadium lights for a football game," he says. "But we find that the ADs, the coaches and the local fans really are kind of shocked that it costs so much to host athletic events and operate facilities. Those kinds of things often aren't broken down for them."

While most high schools aren't yet powered by wind - in addition to cost issues, so much of wind power's success depends on location - an increasing number of schools are incorporating elements of solar photovoltaics into both their academic and athletic environments.

"Solar is driven by rebates, grants and incentives," Smith says, adding that some states have dropped sustainability incentives due to lack of funding. "Solar PV, by itself, depending on where you live, is basically a 30- to 50-year payback. That is not something that is going to make a treasurer jump up and down and want to invest money. Without the grants, without the incentives, renewable energy on a small level like a high school is going to slow down. A solar array or wind turbine just isn't going to make sense."

But solar and wind power purchase agreements might. A PPA is a financial agreement in which a third-party developer owns, operates and maintains the photovoltaic system or wind turbine, while a host customer (a school, say) agrees to locate the system on its property and purchase the system's output from the solar or wind services provider. This often allows the host customer to pay less for electricity without having to purchase the required equipment, while the provider acquires income generated from the sale of electricity to the host customer, as well as federal or state tax credits. Solar carports appear to be among the latest PPA options, at least in California, with dozens of elementary school, high school and community college campuses in that state installing solar-paneled roofs over parking lots.

The Database of State Incentives for Renewables & Efficiency offers comprehensive information about local, state, utility and federal incentives and policies promoting renewable energy and energy efficiency. Meanwhile, the U.S. Green Building Council has launched the Center for Green Schools initiative, which strives to help schools become greener and more energy efficient. Says Rachel Gutter, director of the Center for Green Schools, "Our job is to equip the people who make the decisions by elevating and accelerating important conversations with district and campus stakeholders, and providing the tools and resources to help make [green] transformation possible."

Other ways school districts can approach sustainability is by installing building-automation controls, upgrading to high-efficiency HVAC components, replacing insulation and retrofitting roofs and windows. But the easiest and most affordable step, Smith says, is replacing metal-halide lighting systems with six- or eight-lamp, high-output base fluorescent lights.

"From an athletics facilities standpoint, the most common thing happening today is lighting retrofits in gymnasiums," he says. "You're cutting energy use in half - 455 watts vs. 224 watts. And, quite frankly, the lighting is much better. You get brighter, crisper light that's better for the athletes and coaches."

LAUSD officials didn't want to make South Region High School #15's green transformation too experimental or maintenance-intensive, according to de la Cal. "We have a highly sustainable school, but with all sorts of backups to make it function as a standard school if it has to," he says, citing the additional presence of boilers, standard air handlers and air-conditioning units. "But we know that the A/C won't be used nearly as much as it would be if other options, like an open window, weren't there."

One of the greatest challenges with this net-zero project, de la Cal says, was working through the bureaucracy of the nation's second-largest public school district and developing a district sustainability team to champion the cause. "At the risk of sounding trite, the holistic approach to designing a school facility is really now more important than ever," de la Cal says. "You can do a lot if you think of a building holistically, and you can build a much more sustainable building with relatively little effort. But you have to include everybody in the conversation."

Smith echoes that sentiment. "The key to a successful energy-savings project is to make sure the district takes ownership of it," he says, adding that Energy Optimizers stays with a project for three years to provide necessary training, create on-site green teams and strategize about long-term growth. "That way, everybody can sustain it for a long time."