It's the smaller solar energy applications that are making waves in the sports and recreation field. 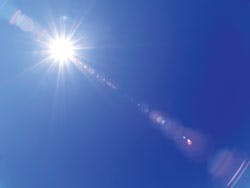 Photo of the sun

Solar panels would seem to be a natural fit for recreation and sports buildings that are blanketed in abundant roof space. Unfortunately, though, the cost of many solar systems continues to make them prohibitive for large-scale applications.

Instead, you can find solar energy at work in various odd corners of facilities. Since photovoltaics in a large array typically require an energy inverter (from DC to AC) and storage system to go with the cost of the panels themselves, they're now used as smaller modules to power scoreboards, exterior lighting and stadium entrance gates.

Larger arrays can bypass storage and tie directly into a building's electrical system, helping ease a building's reliance on energy purchased from a utility. Low-temperature solar thermal collectors, meanwhile, in which liquid is channeled through a panel, are being used widely to heat pool water. Higher-temperature collectors can be utilized to provide a building with hot water to be used in locker and laundry rooms, or can even be used to reheat an HVAC system's incoming air stream.

One fairly recent addition to the sports and recreation world's solar mix is the tubular daylighting device generically known as a solar skylight, solar tube or light pipe. Working off the concept of concentrated solar power, the devices are highly reflective tubes topped with a mirrored collector that can bring daylight deep into buildings. More recent advancements incorporate solar trackers to maximize the amount of sunlight harvested and tie into artificial lighting systems to address issues related to illumination consistency.

So, here comes the sun?

"The expectation has always been that prices would come down," says Roger Hedrick, a senior engineer with Boulder, Colo.-based Architectural Energy Corporation. "Right now anyway, the economics of solar still depends on rebates and tax credits. I think it's going to be an important part of the energy mix in the future, but in the foreseeable future it's not going to replace the power plant."