Dominic Carola converted a circle and a wavy line on a sketchpad into the head and neck of a horse. Within minutes, an upright muscular body, donned in University of Oklahoma gear, appeared underneath. 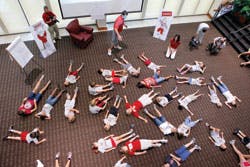 Dominic Carola converted a circle and a wavy line on a sketchpad into the head and neck of a horse. Within minutes, an upright muscular body, donned in University of Oklahoma gear, appeared underneath. As the former Disney animator ("The Lion King," "Mulan," "Lilo and Stitch") completed the rough outline of Boomer, one of two OU mascot ponies, wide-eyed observers watched every move of his black marker.

Carola, president of Orlando, Fla.-based Premise Entertainment, did this demonstration twice - once for Sooner head basketball coaches Lon Kruger and Sherri Coale, and again in front of 40 children invited to take part in a July 18 press conference introducing Sooner Jr., described by Oklahoma athletic director Joe Castiglione as "one of the most unique youth outreaches by any college athletics program in the nation."

Set to roll out in elementary schools this month, Sooner Jr. is founded on four educational pillars - fitness, academics, nutrition and sportsmanship (or F.A.N.S.). Boomer, and his equine cartoon cohort Sooner, will drive the messaging through an iPhone application launched in August that features interactive games such as "Schooner Journey," in which kids steer a covered wagon away from unhealthy food choices as it gathers up water bottles on the open prairie. The app also will challenge children to set book-reading goals, and it will not only encourage calisthenics, but count how many jumping jacks a child does and rank the effort among those of his or her peers. "We're not aware of any other university using its mascots and the athletic program as the motivation, as the facilitator, to get children engaged in fitness, in reading, in improving eating habits," says professor Allen Knehans, chair of OU's Department of Nutritional Sciences. "College athletic programs have not used their visibility, their influence, in this way."

Nor, perhaps, their resources. OU assistant AD for marketing Charlie Taylor says a six-figure sum has been invested in the launch, which was more than two years in the making and included the commissioning of a theme song, called "Sooner Someday." But that amount will change as the program expands to unveil new animations and embrace new technologies. "We did more than 1,400 hours of community service last year between student-athletes and staff, and I think there was a desire to identify a way that we could do it in a fresh manner and make it more than a day at an elementary school, something that had life and breath beyond an appearance at a civic activity," says Kenny Mossman, OU's senior associate AD for communications.

OU also has in place a highly successful and corporate-sponsored Sooner Kids Club, which for a $25 membership fee provides event access, swag and other perks to kids 14 and under living in and around Norman. "That one is the kids coming to us," Taylor says. "This one is as much about us going to the kids." Sooner Jr.'s chief architects felt the best way to connect with kids ages five to 11 was to emulate Disney. It not only had to "look right," according to Taylor, but reach kids in a way they are "absorbing the world."

"I just had a very large, pervasive research project completed and found that more than 80 percent of the three and a half million people in Oklahoma identified themselves as Sooner fans," Taylor says. "Of that 80 percent, 67 percent use a smartphone, and one third of them use an iPhone."

Finally, the new initiative had to offer positive messaging, crafted with the help of experts on campus. Oklahoma currently ranks 46th on the United Health Foundation's annual list of America's healthiest states (up from 49th). Enter Knehans, on cartoon horseback. "Sooner football's a big deal around here, and so if Boomer and Sooner are telling kids that they should eat healthy and be fit and read, that means something," he says. "Popeye used to tell me when I was a kid to eat spinach. It's the same idea - using a popular media figure to encourage healthy behaviors such as eating fruits, vegetables, whole grains and low-fat dairy."

The illustrated Boomer and Sooner, noticeably more buff than the costume versions working the crowd at sporting events, are now appearing on apparel, school supplies and store displays, which reinforce the F.A.N.S. message. According to Renata Hays, OU's licensing director, the athletic department initially identified among its family of 375 licensees those dozen or so that already had a track record with kids' merchandise.

"We see the kids space as a major opportunity, especially when you look at the graphics that we tend to put on children's products," Hays says. "While the interlocking 'OU' may have a lot of meaning to an older fan, it doesn't have that same meaning to an eight-year-old. We wanted to have a natural tie to OU, but also have a really good message in helping address some of the major issues that relate to kids not only in our state but elsewhere, and what better way to get that message to sink into kids than through cartoon characters."

Future licensed products (water bottles, backpacks and the like) will tie into the four pillars, as well. All proceeds from the sale of merchandise and the iPhone app (priced at $1.99) will be dedicated to making the program "bigger and better," Taylor says.

Still, one has to wonder whether the message in the "Sooner Someday" lyric, "I'm gonna be a Sooner someday," is an early attempt to groom today's kids into the OU students - and benefactors - of tomorrow. "If those students grow up to be Oklahoma fans and support us for a lifetime, so much the better," Mossman says. "But our interest was really in the fact that we know we have a lot of young people out there who like us, and we probably should feed that appetite a little bit and give them some things to engage with us as an educational institution. If we were just interested in bringing them along as fans, we probably just would have developed some sort of a game system and left it at that. This obviously has an appeal to parents and teachers, and we wanted them to be supportive of it, as well."

And not just in Norman, Oklahoma or the United States, according to Taylor, who even welcomes the interest of rival athletic departments. "With 268,000 people on Facebook alone, we know we have fans all around the world who can't come to a game. There are kids out there who can't interact with the brand," he says. "The iPhone app now gives us that vehicle to be able to reach out to them. Kids will think of this as a cool new way to interact with the Sooners."

That interaction began with Carola's in-person introductory Boomer illustration, which Taylor termed "magic" for kids and coaches alike. "I knew right there we had something pretty special," he says, "something that really has the potential to do a lot of great things."