Ken Reed doesn't hate sports. He enjoyed a full scholarship to the University of Denver, where he played baseball and basketball, and holds a doctorate in sports administration. 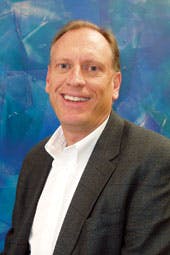 Ken Reed doesn't hate sports. He enjoyed a full scholarship to the University of Denver, where he played baseball and basketball, and holds a doctorate in sports administration. So when people ask him why he's attacking organized sports at all levels as right-hand man to Ralph Nader in League of Fans (the consumer-advocate-cum-presidential-candidate's sports reform project), Reed is forced to explain his motives. "I love sports. I'm trying to make them better," says the author of near-daily blog posts at leagueoffans.org, as well as the group's 10-part manifesto addressing the perceived plight of sports fans and participants alike. Paul Steinbach asked Reed, a self-described "recovering sports marketer" and PE4life veteran who accepted his current job in January, to touch on just a few hot-button issues.

Q: What do you make of the chaotic conference realignment taking place at the college level?
A: It's what we call profit at all costs, or PAAC, because it has nothing to do with education or what's best for the student-athlete. How could Texas Christian University joining the Big East have been good for the students who are already missing a lot of class time? It's all about TV contracts. It's a pure greed, land-rush kind of thing. And part of the problem, too, is that no one is in charge. There's no overall commissioner of college football, if you will, who looks out for the best interests of the game. It's all "get what you can right now."

Q: Should collegiate student-athletes be getting a share?
A: With the structure that exists now, there's no way that you can pay these athletes, because Title IX would make it impossible. You couldn't just pay a couple men's sports. You'd have to pay women's sports, as well, and how do you decide which sports don't get paid? Does the soccer team get nothing?

Q: How do you suggest fixing scandal-ridden college football?
A: The core system doesn't work because there's an inherent market for the talent of these kids, and so there's always going to be an underground economy that pays them off and academic corruption to keep them eligible. So our point is you have to blow up the entire system, create a for-profit subsidiary association of mostly BCS schools and take their tax-exempt status away. They become a for-profit subsidiary under the university umbrella, but not tied to education. Then they could make their own rules, pay players and set a salary cap among the 60 or so schools. And the rest should all be under the Division III model of no scholarships and get back to sports as part of the overall educational experience. But, I think the bigger plus of eliminating athletic scholarships is the positive impact it would have on high school and youth sports, because the original ideal of high school and youth sports is being warped by this quest for scholarships.

Q: Is that the single biggest problem facing sports at those levels?
A: The biggest problem is the lack of broad-based participation in sports. It starts early with youth sports leagues focused on elite athletes and with high schools putting a lot more money into varsity sports than P.E. and intramural sports. I'm not against varsity sports - I had a great time playing them - but they affect such a small percentage of kids in big high schools that to cut P.E. classes or drop intramural programs so the football team can have the best video equipment is obscene.