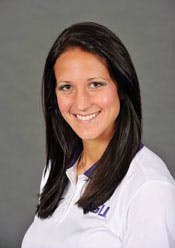 Louisiana State University's early exit from the NCAA Women's College World Series last month was admittedly hard on senior Brittany Mack, who pitched a complete game shutout in the Tigers' lone WCWS victory. Helping to soften the blow was the presence of Tyler, a disabled child who made the trip to Oklahoma City with his family after meeting Mack through the Baton Rouge Miracle League, which provides baseball-playing opportunities for children with disabilities. All season, whenever her own schedule allowed, Mack dropped in on Miracle League games to help out on the field or simply observe from the stands. "I know they all appreciate it when I'm there," she says. "Some of the kids can't really talk, but you can tell by how big they smile." In January, she launched "Geaux Play," which established donation bins at LSU home softball games (promoted by a scoreboard video) that by season's end fans had filled with some 4,000 pieces of new and used sports equipment - enough to supply not only the Miracle League, but public schools serving underprivileged children, too. Paul Steinbach caught up with Mack the day before she left Baton Rouge for Orlando to sign a National Pro FastpitchTM contract as the USSSA Pride's number-one overall draft pick.

Q: How did you first learn of the Miracle League?
A: It was brand new here just about two years ago, and our coach was saying, "Hey, they just started this baseball league, and they want us to come." Personally, I didn't know that it was for kids with disabilities, and then our whole team gets there, and I see all the kids with their own field that's accessible to wheelchairs, and I was like, "This is amazing!" I'm sure there are people who tell them, "Obviously, you're in a wheelchair, you can't walk, so you can't play sports," so it's just awesome when these kids can basically defy the odds and say, "You know what? I'm going to play baseball anyway."

Q: Were you surprised by the fan response to Geaux Play?
A: It was just unbelievable what the fans were able to bring to us. We collected at every home game, but I also had some people give me equipment outside of games. They would see me and knew what I was doing, and they would just hand me items to throw in the back of my truck. We've got badminton equipment and tennis balls. We've got lots of bats, gloves and helmets. Someone brought in I don't know how much money's worth of brand-new equipment - basketballs, kickballs, footballs. People brought equipment that was purchased for children who have a weak upper body. They brought the perfect kind of bat for them to swing.

Q: Will you continue to make Miracle League contact now that you're out of school?
A: I definitely want to keep Geaux Play going. I was informed that LSU liked the idea so much that it wants to try to get every sport to do it. My plan is to come back to Baton Rouge after the summer is over, so I'm hoping I can help LSU really make it grow. It would be awesome if I could get this idea out to other schools.