The tragedy of the Boston Marathon brought to light the unexpected vulnerabilities surrounding athletic events and facilities.

The tragedy of the Boston Marathon brought to light the unexpected vulnerabilities surrounding athletic events and facilities. In the weeks and months after, everything from road races to NFL stadiums has been scrutinized in a new light. The next security threat will likely not come during a marathon - but where? A high school basketball game?

"You're aware of the 7.6 million high school athletic participants, but then you have half a billion spectators going through high school gates during a year," says Mike Blackburn, associate executive director of the National Interscholastic Athletic Administrators Association. "Those numbers would surpass collegiate and pro attendance annually. You don't have the large one-site, one-time gathering, but collectively, those numbers are significant."'

Such numbers can create an opportunity for not only a planned and targeted security threat, but any number of other potential types of conflict. It could be gang-related violence erupting in a parking lot after a game, or even something as limited as a conflict between two players. "Any athletic venue is a potential source of security breach," says Blackburn. "A parent going out onto a baseball diamond to approach a coach or an official - you could have an incident and you need a plan for it."

AFTER SCHOOL AN AFTERTHOUGHT
Most states require high schools to have emergency procedures in place, but that planning doesn't always extend to afterschool events like athletics. It's that shortcoming that led to the creation of the Safe Sport Zone training program. "Safe Sport Zone offers a hands-on, face-to-face presentation based on a personal experience from an athletic administrator's perspective," says founder and president Jay Hammes, who recently retired from his post as lead athletic director for the Racine (Wis.) Unified School District. "It runs the gamut from dealing with spectator issues, gate entrance, facilities maintenance, evacuation procedures, and almost any emergency that a school official would encounter at an event."

Hammes partnered with the NIAAA to create Safe Sport Zone to provide afterschool event safety training. More recently, the groups have been working with the National Center for Spectator Sports Safety and Security (NCS4) to discuss the issue of afterschool safety and security. The three groups, along with the National Federation of State High School Associations, the Department of Homeland Security and representatives from five Mississippi high schools, met in November 2012. "The summit indicated there are gaps related to emergency response preparedness, evacuation capabilities, and lack of education and training for those responsible for event operations," says NCS4 director Lou Marciani. "The overall consensus was the need to build stronger, more secure and resilient safety and security measures."

This summer, Hammes was a part of the NCS4 Conference's first high school program, as well as a task force aimed at evaluating the risks present at afterschool athletic events and what needs to be done to mitigate those risks. "The NCS4 Conference solidified what Safe Sport Zone has been advocating; schools should be practicing evacuations after football and basketball games," says Hammes. "The possibility - even though it has a low probability - of a conventional explosive entering a high school event is real."

That realization should be enough to put administrators on alert. But it's more than that. Tornados, fires, gang incidents, storming the court - it's all part of Safe Sport Zone training. "The most important learning is preparing school officials and first responders to implement interscholastic and afterschool emergency operations plans," says Marciani. "By having plans in place to keep spectators, athletes, officials and employees safe, schools play a key role in taking preventative and protective measures to stop an emergency from occurring or reduce the impact of an incident. "

At the center of any successful emergency plan is having a team that knows what to do. "We are advocating that schools select their management team and develop a master plan for their events," says Hammes. "No one can do this without a team."

The team can include anyone from announcers to hired security to volunteer parents working the concessions stand, all of whom need to be trained not only in how to react to a given situation, but how to communicate with the people around them, says Blackburn. "If it's a violent weapons situation in your gymnasium, your police and security personnel are going to be important, but I think one of the most important factors is properly training your announcer in working with the crowd."

"It's important to train personnel on moving the fans through the gate," says Hammes of the screening process used in the Racine USD and recommended by Safe Sport Zone.

"The other area to work on is dealing with the unsportsmanlike spectator," he adds, referencing several incidents highlighted in the training in which a confrontation between an adult and student quickly escalated into chaos. "There is a right and wrong way to deal with the unruly spectator that can diffuse the problem before it explodes." 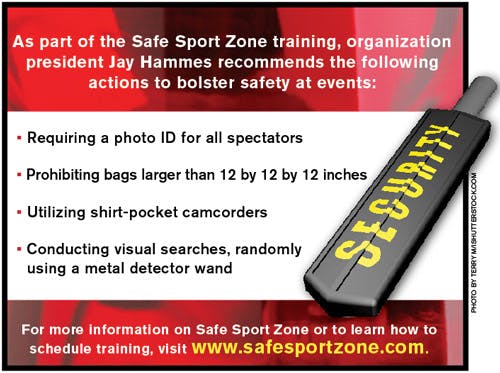 PREPARE FOR THE WORST
Will the next high school sporting event you attend end with a terrorist situation or even a fight in the stands? Probably not. "The vast majority of high schools do have communities where the wholesomeness is still there," says Blackburn. "What we see on TV is the other side of it. It's real. There's no way to sugarcoat it. The incidents that they have had in many cases could happen to those softer targets."

Hammes hopes that the work being done by Safe Sport Zone, the NIAAA, NCS4 and other organizations will contribute to a cohesive model for afterschool athletics and events across the country, bolstering safety and reducing the threat of a targeted attack, but notes that no one organization or program can do it all. "I trained 32 schools and districts last year, but there are 18,684 high schools offering interscholastic sports in the country," he says. "We are all in this together and need to continue to move forward."

"Unfortunately, it's a cultural change and societal change, not necessarily for the better," adds Blackburn. "It's something to prepare for. More than anything, it's proper planning and safety to head those things off before people enter the venue. That's the key. But then when an incident does occur, having the personnel in place to deal with it. I don't know that you can plan for every unknown that is out there, but we're taking a step in the right direction."