Doctor: The 'Worst Week' in 35 Years for Athlete Deaths

Douglas Casa, doctor and author of the book Preventing Sudden Death in Sports and Physical Activity, is calling the past five days "the worst week in the last 35 years in terms of athlete deaths." At least three heat-related deaths on high school football practice fields have been reported, including two players in Georgia and a coach in Texas. Additionally, four high school players in Arkansas were hospitalized for dehydration Wednesday as temperatures soared to a record 114 degrees. And the death of 28-year-old runner Jeremiah Morris in an endurance race called the Warrior Dash on Sunday is being blamed on heatstroke. 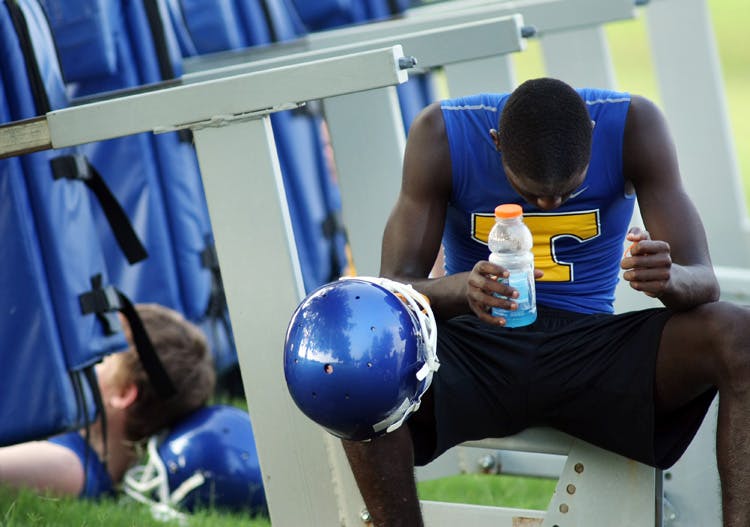 Casa, who also is chief operating officer of the Korey Stringer Institute at the University of Connecticut, told CNN.com that parents need to demand more specific and enforced rules for high school coaches training in extreme heat and other severe weather. Currently, there is no set of national rules; most state athletic associations issue guidelines to member schools, although some states (including Arkansas) have outlawed consecutive two-a-day practices, and three days of conditioning with only football helmets and shorts are mandatory before full pads can be worn. Still, if stricter oversight and enforcement doesn't happen soon, Casa predicts that the tragedies will continue. "It's not like the NCAA, where they mandate rules and the colleges have to follow them," he said. "The [state] high school association can make some recommendations, but they don't have any power or teeth to have those policies actually implemented."

The NCAA's heat mandates have been in place for eight years; during that time, there has been only one heat-related death in college football, CNN reports. (In addition to adhering to NCAA rules regarding practicing in hot weather, Georgia State University football players now wear tiny sensors in their helmets that transmit body temperatures to a handheld device carried by one of the team's certified athletic trainers. When a player's temperature reaches 102.5 degrees, a warning signal goes off in the device. But players are often pulled from practice before their bodies overheat that much, according to Bob Murphy, Georgia State's associate athletic director for medicine and nutrition.)

"Heatstrokes are completely survivable," Casa said. He suggests having a certified athletic trainer on the field at all times, someone who not only can recognize the signs of heat-related issues but also treat them. During August football practices in extreme heat, most high schools have only coaches on the field, he said.

Casa also encourages coaches to keep a tub or portable pool of cold water on the sidelines. An athlete suffering from heatstroke can recover if cooled immediately, he said, adding that too many coaches simply call 911 and wait for help to arrive - wasting valuable time during which the victim's brain and vital organs continue to overheat. Death can come within 30 minutes.

"The No. 1 thing is to stay ahead of it," Steve Carpenter, a veteran certified athletic trainer in Tennessee told the Chattanooga Times Free Press on Monday. "By the time a kid starts getting dehydrated, it will be difficult to get him back to normal quickly. We tell them that they should come to practice already hydrated and be able to urinate clear fluids. Of course, you have to have frequent water breaks, and you need to keep an eye on them. If they're starting to fatigue, give them a break. "

The Korey Stringer Institute, named after the Minnesota Vikings offensive lineman who died from heatstroke 10 years ago this week, has posted its heat-acclimation guidelines for high school sports programs, and the American Football Coaches Association posted an online video featuring a conversation with Texas A&M University's head athletic trainer David Weir about how coaches and administrators should address heat issues during football practice.