"The summit gives us an opportunity to review the environment and threats surrounding the multiple events hosted at professional sports facilities," says NCS4 director Dr. Lou Marciani. "Every stadium and arena is presented with challenges in implementing safety and security best operatory practices. The summit gives industry leaders a chance to discuss best practices in a collaborative environment with the goal of developing a comprehensive guide that will be the industry standard." 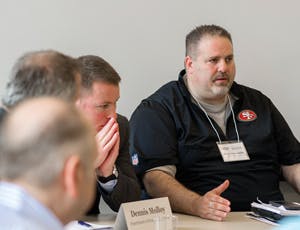 The summit featured keynote speakers and panel discussions covering topics such as parking lot security, gun-carrying issues relative to off-duty personnel, and violent extremist attacks. Industry leaders from as far away as Canada, England, and China participated in the summit.

John Beattie, stadium and facilities director for the Arsenal Football Club/Emirates Stadium in London, points out that every idea or suggestion gleaned from the summit offers a potential solution. "If we leave here with just one idea for enhancing our security operations, then the trip will have certainly been worthwhile," said Beattie. "Safety and security were always part of the background at major sporting venues, but we're seeing it more now at the forefront. Unfortunately, it takes something serious like the Paris attacks to happen before significant change occurs." 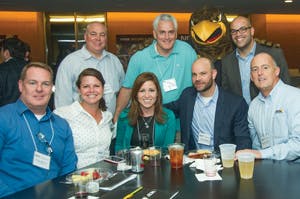 Amid more serious discussions, attendees had many opportunities to mingle and enjoy themselves.

"We are very proud to be part of this summit," Mercurio says. "NCS4 is out front in establishing best practices for professional leagues and colleges, and we fully support its efforts. Communication and collaboration are essential as we continue to look for ways to improve safety and security at our venues."