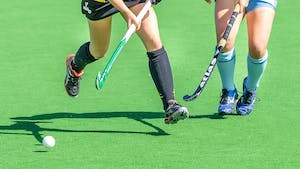 As reported by Sun Journal of Lewiston, a player on the Lewiston field hockey team tested positive for the virus last week. Six members of the field hockey team who were identified as close contacts to the infected player, as well as their parents, lobbied School Committee members to change quarantine guidelines for outdoor activities.

“We come here because we feel that it’s unfair and inconsistent guidelines that are stopping us from playing our game and going to school,” sophomore Savannah Connor-Schade told committee members, who agreed to make changes Monday.

As reported by ABC affiliate WMTW in Poland Spring, the state recommends a 10-day quarantine, but the school committee changed its protocol to shorten the quarantine time to seven days if a player gets a negative test. Without the change, the Lewiston players would not have been allowed to play Tuesday night — their Senior Night — due to a positive case on the team.

The new guidelines allow students designated as close contacts to return to school after seven days if they test negative for COVID-19 with a verified test outside of school on day five, or a rapid test in school on day seven, according to the Sun Journal. The motion also states that physical contact must be demonstrated, not assumed.

Lewiston athletic director Jason Fuller said he spoke with school administrators at Bangor several times Tuesday morning before they ultimately made the decision at 1:30 p.m. to cancel the game. According to Fuller, Bangor administrators felt the competition would be an unnecessary risk to its students and staff.

The game would have been the final regular season competition for the Lewiston and Bangor field hockey teams. With playoffs are set to begin later this week, the game cannot be rescheduled. However, Fuller is working to plan a scrimmage before playoffs begin so the junior varsity players have one last game and the team can celebrate senior night, which is planned for Thursday.

“I was feeling disappointed and kind of at blame,” Madison Freeman, a sophomore on the team, said. “If we hadn’t gone to the board, we would have had a game today. But I also feel it was still right to go to them so my sister and my fellow teammates could play in the game [tentatively scheduled] on Thursday.”

Tracy Miller, president of the team’s booster club, said she was not surprised when Bangor canceled the game.

“I think it makes sense considering that there is a policy, that there are guidelines that pretty much everyone has been following all season, and suddenly it was changed,” she said. “The decision was made without enough input from all of the important stakeholders, and it’s not the kind of decision that should be made lightly, without that kind of input.”