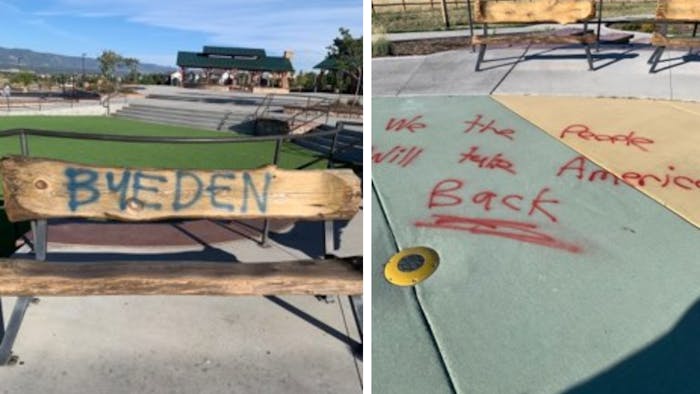 An alleged vandal who caused an estimated $16,000 damage to a park in Colorado has been identified, officials said.

According to the Gazette of Colorado Springs, John Venezia Park was damaged on Sept. 11 by tagging benches, sidewalks and other park property. The next day, the vandal struck again causing more damage, this time targeting water fountains and smashing lights. The graffiti included politically motivated rhetoric.

Park maintenance supervisor John Weaver told the Gazette that while the graffiti was promptly removed, parks staff had to wait for parts to arrive to repair other elements of the park destroyed by the vandal. Weaver said that was because some of those materials have been "harder to come by."

The damage caused the parks department to close park restrooms — which are typically shut down for the season sometime around the end of October — over a month early.

On Sept. 23, Crime Stoppers issued a $1,000 reward for information leading to an arrest in the case.

Robert "Hiking Bob" Falcone, a local journalist and outdoors expert, was angered and upset by the vandalism, describing it in an episode of his podcast as "sociopathic" and "horrific," and admonished anyone refraining from reporting those responsible.

A few weeks later, Falcone decided to match the Crime Stoppers donation to boost the reward to $2,000 on Oct. 12.

The Gazette reported that only hours after the new reward was announced, someone called the anonymous Crime Stoppers tip line and Colorado Springs police, providing video footage showing what the vandals were wearing at the time of the crimes and "facial details," according to the Crime Stoppers news release and police statements.

That information was passed to Sgt. Gary Tedeschi, who was investigating the case. The suspect information allowed police to identify and arrest a teenager in connection to the Venezia Park vandalism, later linking them to a separate vandalism case.

Police did not identify the person arrested, saying only that they were under the age of 18. Police also would not say if the separate vandalism case was on city property.

Falcone, who works with the Colorado Springs Parks, Recreation and Cultural Services department as the TOPS working committee chair, told the newspaper he felt he needed to take action because that type of destruction can spiral out of control if left unchecked.

"Communities degrade when people just shrug their shoulders and say 'Well, what are you going to do?' That emboldens the people who are doing these things to just keep doing it," Falcone said in a November interview with the Gazette. "But when the community stands up and says, 'This is not acceptable, and if I know something, I’m going to tell somebody,' then the people who are doing this stuff realize, 'Maybe I’m not going to get away with this and maybe doing this is not a good idea,'" he added.

Falcone also said that being involved with the parks department, he knows "how hard it is" to fix up city parks up after that kind of destruction, which contributed to his decision to boost the reward.

Still, Falcone was grateful for the tipster.

"The people who gave the tip — we can’t forget that they’re the heroes here, they actually gave the information to the police," Falcone said. "If just regular citizens get involved in some manner, they can hopefully get the word out there that if you're going to go out and do something like this, that somebody's going to see you and somebody's going to say something."