These articles originally appeared in the September 1991 issue of AB. 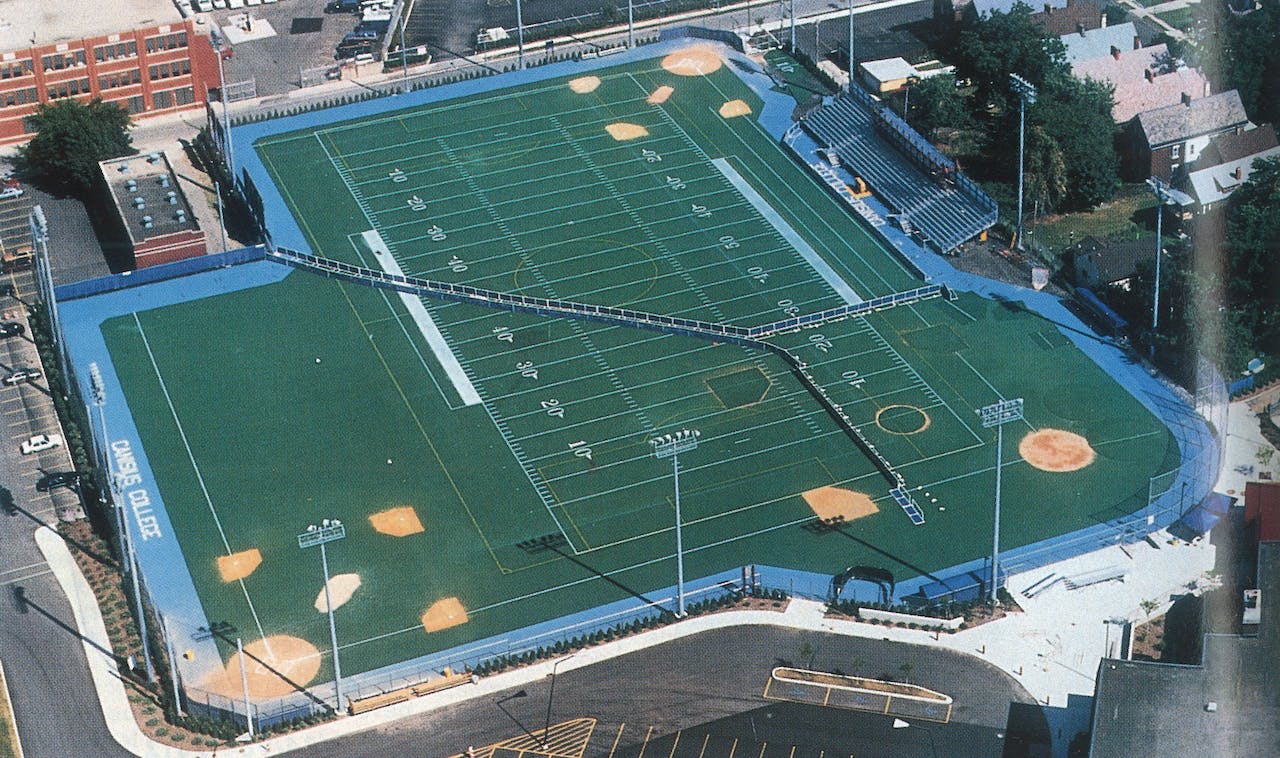 The invention of synthetic turf in the early 1960s has had a tremendous impact on the way in which sports and recreational activities are conducted and viewed. But while synthetic turf has proven itself as an athletic surface for the highest levels of competition, its merits have been the subject of almost constant debate. Ingredients often missing from this debate are fact, logic and reason.

The essence of the case for synthetic turf is simply that to a large extent, synthetic turf is here today because grass didn’t always work. Turf was developed as a solution to the demands of athletics and recreation facilities that were not met by grass. Studies by turf owners have shown that the activities of several grass fields can be handled by one turf field. Synthetic turf provides a uniform, consistent playing surface able to withstand the rigors of heavy, multipurpose usage in all weather conditions with low maintenance costs.

Everyone enjoys their lawn; People are emotionally attached to their own “Field of Dreams.” This attachment should not, however, prevent people from realizing the limitations of natural grass. In fact, so-called natural grass is hardly natural anymore. Today’s state-of-the-art grass systems are sodden with chemicals, pipes, pumps, sensor, sand mixes, fabric soil stabilizers, heating coils and more—hardly the pristine, back-to-nature image conjured up in most of our minds. Like your lawns, which after an application of fertilizers, insecticides and so forth require the banishment of children and pets, today’s grass is decidedly “unnatural.”

While some visible conversions from synthetic turf to grass have occurred over the past few years, proportionality has been lost in typical “man bites dog” fashion. The facts show that during the past five years, turf beats grass in major surface selections by more than 20 to 1. For reasons known only to members of the national media, it is newsworthy when one stadium switches from turf to grass (and restricts use accordingly), but not when school districts, small colleges and universities nationwide switch to synthetic turf at a greater rate.

What we are experiencing is a rash of “boutique” fields, those symbols of conspicuous consumption where for seven or eight occasions per year, 90 individuals command the fixed capital expense of 100,000-plus capacity stadiums, which then sit empty the other 357 or 358 days of the year. Ironically, synthetic fields are usually found nearby these “boutique” fields, for protection against overuse or inclement weather. This is hardly a trend that many can afford to follow.

No matter how sophisticated the grass system, use must be restricted. Rain and snow lead to mud and less than optimal surface characteristics are but a storm or activity away. Even in the best growing climates (Florida, California and Arizona), it is common to see grass surfaces ravaged by use, abuse and weather in spite of the best efforts by groundskeepers.

The issue of injury as it relates to sports surfaces defies logic. Some of the most serious, gruesome and potentially career-threatening injuries, including those sustained before national television audiences by Joe Theismann, Tim Krumrie, Kellen Winslow, Doug Williams and Eric Davis, occurred on grass fields—but the surface type was not a factor in any of these.

Modern American football is simply a high-speed, violent activity, and football players are prone to injuries associated with collision sports. The greater bulk of the modern athlete (the average lineman from eight CFA schools surveyed in 1989 was 4 inches taller and 52 pounds heavier than his 1959 counterparts) has played a key role.

Recent studies published by the NCAA, the NFL and Dr. James Nicholas (team physician for the New York Jets) have all shown no significant differences between synthetic turf and grass in the number and severity of injuries. We may be seeing the effects of overloaded bones, joints, cartilage and ligaments in athletes manifesting themselves in injury trends—not to mention the effects of performance-enhancing drugs.

The chance of injury is related to a surface’s overall playability; a major benefit of synthetic turf. Synthetic’s playability is a direct result of the uniformity and consistency of several key design parameters, including traction, shock absorbency, ball response and weather performance.

Traction must be balanced between “too much” and “too little.” Most often, the player wants as much traction as possible, while the sports medicine staff wants only as much traction as is required to perform. The consistent traction offered by turf allows players to wear flat-soled shoes that minimize the chance of foot-fix.

Shock absorbency is crucial, as the turf system must provide impact absorption over a broad temperature range. Today’s shock pads provide more cushion between the player and the base, and exhibit g-max values in the range of 80-100 g’s, similar to well-maintained grass. Similarly, ball response is tuned to simulate that of grass, while offering consistency and predictability in ball roll and bounce.

Weather performance of the synthetic turf system is targeted to allow retention of playing characteristics despite weather changes. The effects of moisture, excessive cold or heat, and snow are neutralized by the non-directional fibers, the high-density underpadding and new drain-through turf systems.

Another compelling factor in favor of synthetic turf is drastically reduced maintenance costs. Over the typical life of a synthetic turf field (usually 8-10 years), maintenance costs should be in the neighborhood of $6,000 to $8,000 annually. Grass fields can require as much as 10 times that amount, and some “boutique” fields have been reported to require annual maintenance expenditures in excess of $125,000. Synthetic turf does not require sodding, mowing, reseeding, fertilizers or pesticides. Game lines do not have to be repeatedly applied, and turf does not have to be covered during extended wet-weather periods. Synthetic turf owners have no need for those comical “sod-squads” who rush out onto the field during commercial breaks, in a gallant attempt to keep the field from disintegrating before the eyes of 80,000 spectators and a national television audience.

Since maintenance costs are, by their nature, highly labor-, material- and capital equipment-intensive, the certain escalation in wages, supplies and vehicles ensures that turf will always enjoy a favorable maintenance cost position relative to grass.

The debate will surely rage on, but it is important that it be played on a level playing field. Critics need to take a closer look at synthetic surfaces and, for example, stop the linking of every knee and ankle injury to artificial turf. In only 25 years, synthetic turf hall allowed millions of young people to run, pass, kick and catch on a clean and uniform surface.

The Grass is Greener 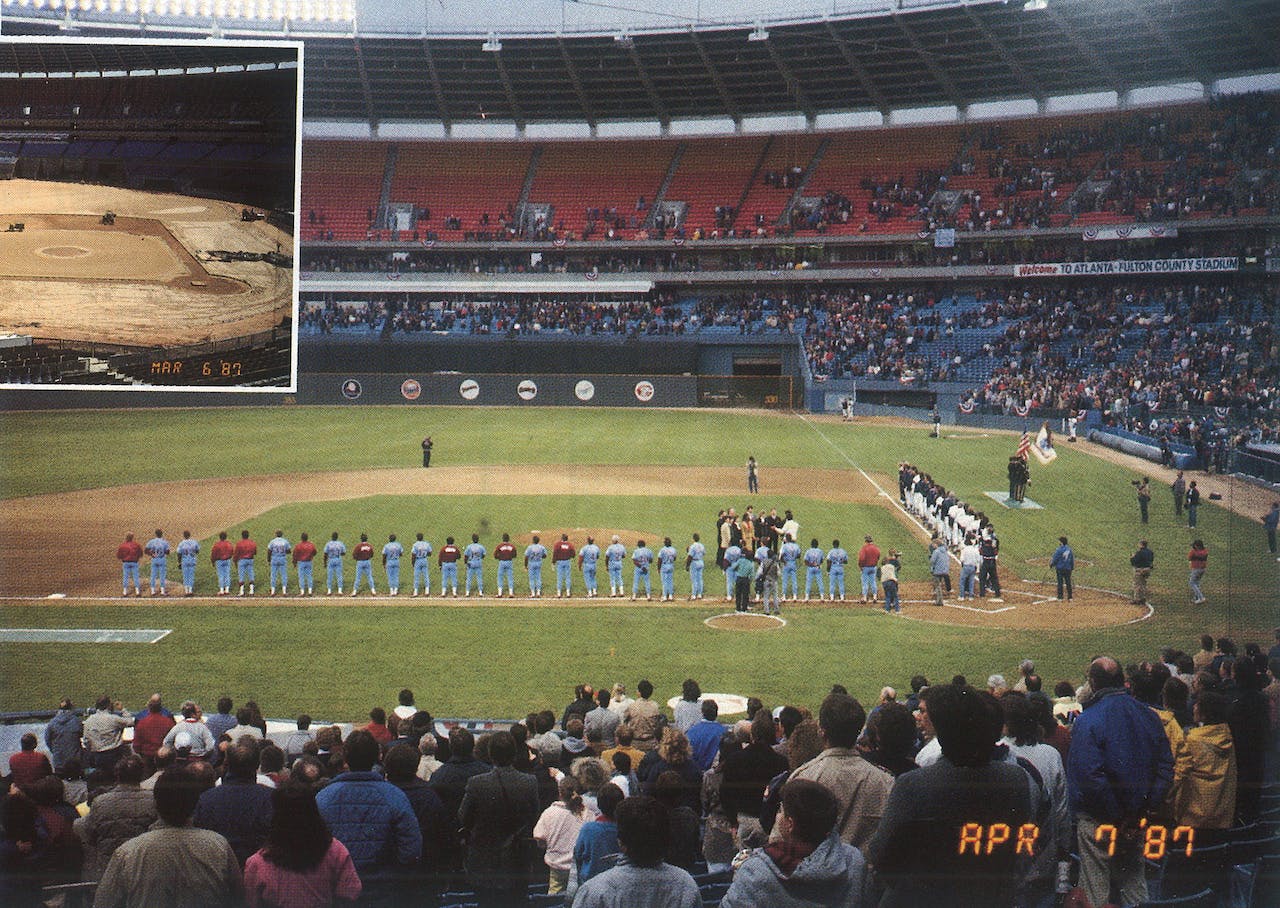 With proper treatment, dynamic turfgrass systems are able to recover for a period of more than 20 years. Contrast this with synthetic surfaces, commonly believed to be more durable. Placed over concrete or asphalt topped by a rubber pad, the normal life of the synthetic turf carpet is from six to eight years, regardless of use.

The living natural turfgrass surface has a direct impact on its surroundings. Dr. James Beard, of Texas A&M University, conducted research comparing surface temperatures over various surface types on a selected August day, and discovered what many athletes have known for years: green, irrigated turf (88 degrees) is a cooler surface than dry, bare soil (102 degrees) and dry synthetic turf (158 degrees).

In fact, an area of natural grass the size of a standard baseball/football field will provide the equivalent of 350 tons of air conditioning on any given growing day—enough air conditioning capacity to cool 100 homes. Natural turfgrass removes large volumes of dust and hundreds of pounds of auto exhaust-created sulfur dioxide from the air every year. Additionally, natural turf removes such unwanted gases as ozone, hydrogen fluoride, peroxacetyl nitrate and carbon dioxide from the air, and returns oxygen to the atmosphere. The quantity of oxygen produced by the average football or baseball fields is capable of sustaining the oxygen needs of both teams and their managers for an entire year. Turfgrass is also an effective filter for waterborne toxins. Runoff water collected from natural turfgrass systems that have had fertilizers and pesticides applied to them within two days of sampling were cleaner than the government requires for drinking water quality standards.

Today’s sand profile natural turfgrass system provides virtual year-round access to the surface. Actively drained surfaces (those equipped with Prescription Athletic Turf, for example) allow for the quick movement of excessive rainfall from the system. The result is a natural surface with little interruption in play. Under intense use, synthetic carpets would have a much more resilient surface in the short run. However, natural turfgrass surfaces last and provide suitable playing areas indefinitely, as long as adequate maintenance is provided for both the turf surface and the soil profile. The incorporation of a plastic mesh or synthetic fibers in sands will enhance durability and allow for more and varied use of these surfaces.

Natural turfgrass systems do require regular maintenance to ensure their longevity and to provide a safe and aesthetically pleasing surface for the athlete, as well as for the fan. The appearance of the field is highly dependent upon the knowledge of the turfgrass manager, availability of proper turf maintenance equipment and support of the athletic staff.

In both professional and college sports, the natural turf surface provides a much more forgiving playing field. Natural turf surfaces provide the athlete with good footing or “purchase,” while at the same time absorb and minimize the shock of a player’s fall. Professional and amateur sports organizations around the world have chosen to utilize natural turf, and some of these organizations (World Cup Soccer, for example) and athletic conferences (chief among them the Big Ten) have begun making the change from synthetic to natural turfgrass surfaces.

The price of a natural turfgrass system ranges from $200,000 to $600,000 for a football field and $300,000 to $900,000 for a baseball field, depending upon the degree of technology incorporated into the system. Construction of a synthetic turf system, including pad, carpet and subcarpet costs approximately $1 million for a football field and proportionally more for a baseball field. Amortized over the life and functional use of the system (six to eight years), the cost per year is $125,000 to $166,667.

When maintained properly, the natural turf system should provide a good functional surface for a minimum of 20 years. There are numerous examples of sand profile turfgrass systems still in use after more than 20 years of service. Even the most expensive turf field amortized over 20 years would average less than $50,000 per year—while the synthetic system, three times more expensive, would have been replaced at least twice. Natural turfgrass systems will require approximately $30,000 per year for maintenance.

Synthetic carpet turf surfaces are often recommended for use because any number of non-sporting uses can occur on the surface with little or no damage to the carpet Improvements in technology and engineering in the natural turfgrass system have also provided for its expanded use in stadiums and parks. Methods of protecting the turf surface include the use of geotextile fabrics and temporary plywood surfaces. Improved engineering in the area of subgrade support also will continue, so that in the future natural turf surfaces will see much broader and more frequent usage.

At present, synthetic surfaces hold a competitive edge in only one area: covered stadiums. In these cases, adequate light to support turfgrass growth is not available. However, improved technology in portable light intensity, moveable natural turfgrass sod sections and other future advances will offer the opportunity to provide a natural turf surface inside closed stadiums.