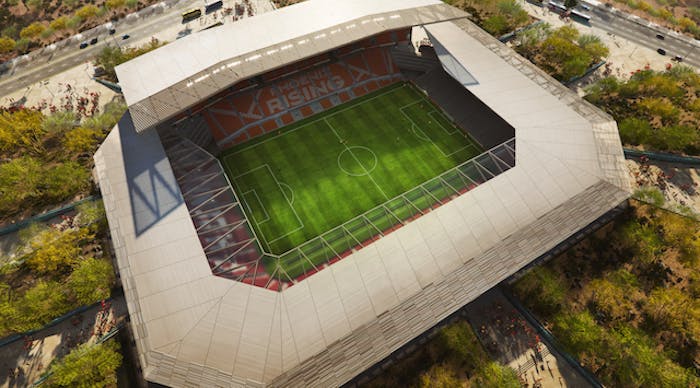 Phoenix Rising FC released new renderings of a proposed MLS stadium. Design firm Populous was tapped to develop the stadium, as the professional soccer league considers which cities to target for expansion. The proposal calls for a 21,000-seat stadium, with a 360-degree concourse, and expansive canopies that would provide shade for fans. MLS plans to announce expansion cities later this year. —Source: www.psam.uk.com

Louisiana State University released renderings of its forthcoming baseball weight room facility. The $2 million project, which is expected to begin construction after this season, includes an expanded weight room, a locker room, a nutrition area, a training space and more. LSU’s board is voting on approval for the facility at its meeting today. —Source: The Advocate

The Minnesota Vikings officially moved into the Twin Cities Orthopedics Center, a new state-of-the-art facility that becomes the team’s new home after being based in Eden Prairie, Minn., since 1981. The facility offers many player-focused features, including a 6,500-square-foot locker room, a new training room, a hydrotherapy area, and a 6,100-square-foot weight room. —Source: Vikings.com

Any free agents who come through the #Vikings' headquarters in Eagan will be blown away by what is arguably the nicest facility in the NFL. pic.twitter.com/qXqNpKz7bu

The University of Portland announced plans for an on-campus track and field facility. The facility will include an eight-lane, competition-quality track, throwing areas, jump runways and pits, and seating for about 500 spectators. The project is reportedly part of a campus expansion set to include a rowing dock and boathouse, a tennis center and soccer fields. The track project will eliminate the need for the school’s track teams to practice at off-campus sites. —Source: OregonLive.com

The City of Arlington, Texas unveiled plans for the largest eSports stadium in the country this week. The plans call for converting the Arlington Convention Center into an eSports-exclusive stadium, which would be rebranded as Esports Stadium Arlington. The plans call for seating for 1,000 spectators, gaming, retail and social spaces. The venue is expected to open later this year. —Source: Archpaper.com 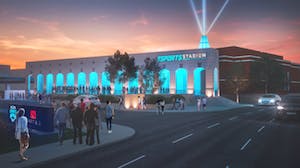