More than a dozen kids were sickened at a Life Time Fitness location in Johns Creek (Ga.) when a chlorine mixer malfunctioned at the location’s outdoor pool.

According to the local ABC affiliate, a total of 28 kids, between the ages of 10 and 12, were at the pool Tuesday for a swim meet. Around 7:30, many of the kids began vomiting and some had trouble breathing.

Cade Patterson, a 14-year-old patron, arrived at the gym to work out and saw paramedics wheeling a girl out on a stretcher.

Update: Fire department says chlorine mixer malfunctioned at pool, caused kids to vomit, have trouble breathing. 28 kids were in the pool. 8 taken to area hospitals. Rest treated on scene. @RikkiKlausWSB and @NefertitiWSB will have latest at 11! https://t.co/lUyVcT4xeH

“That’s really disconcerting. It’s not something you want to hear, and it just worries me that something like that could happen," Patterson said. “I’ve been coming here for a really long time, and I’ve never had any issues myself. I hope the kids are doing alright.”

Eight kids were taken to area hospitals, while others were treated at the scene. Life Time Fitness says it has shut down the location while it investigates the cause of the problem. 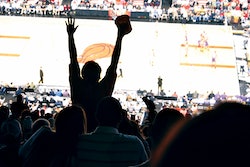