Back in 2007, members at Gainesville Health & Fitness might have noticed a young man planted behind an elliptical machine, "tinkering" (as he called it) with the unit's moving parts. 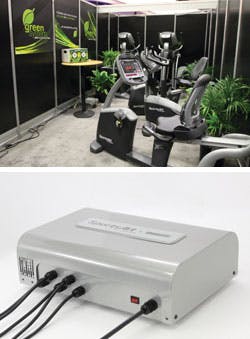 Back in 2007, members at Gainesville Health & Fitness might have noticed a young man planted behind an elliptical machine, "tinkering" (as he called it) with the unit's moving parts. That would have been Hudson Harr, then a recent University of Florida graduate invited by club owner Joe Cirulli to experiment on the equipment. Harr was convinced he could harness the kinetic energy generated by elliptical users, convert it to kilowatt-hours and load it back to the facility's power grid. The result? Free electricity.

"I went in there expecting I was going to add a turbine and other types of controls to these machines - not realizing a lot of them existed in the machines already," says Harr, now president of Clearwater, Fla.-based ReRevâ ¢, a company that retrofits cardio equipment with small resistors and control boards that feed energy to inverters the size of a personal computer's central processing unit, which then reroute the power. "We just had to make use of it and engineer a process to pull the power out. Solar, wind, any form of renewable energy being pushed back to the grid does so in the exact same way."

ReRev and other companies have since created various means to achieve that same end. For example, while the majority of ReRev retrofits are for ellipticals - Harr says their weight, stability, design and higher usability make them the ideal green machine - The Green Revolution in Ridgefield, Conn., retrofits indoor cycling equipment. Other manufacturers, including PlugOut Fitness, a Seattle-based manufacturer formerly known as Resource Fitness, produces out-of-the-box elliptical cross-trainers and stationary cycles specifically designed to power a facility's grid.

Meanwhile, at the International Health, Racquet & Sportsclub Association's International Convention & Trade Show in March, Woodinville, Wash.-based SportsArt Fitness launched the Green System, a "pod" of fitness products wired to an inverter about the size of a stereo receiver. Each pod, expected to be available later this year, can generate up to 2,000 watts per hour, resulting in annual electricity savings of more than $3,000 depending on usage, according to the company.

The benefits are many. "It's not meant to make you money, but it will definitely offset electricity," says Amber Maechler, marketing and communications director for SportsArt Fitness, which also makes a treadmill that uses less energy than traditional units, as well as a line of self-generating ellipticals and cycles requiring no outside power. "Plus, members are going to feel good about generating energy, and club owners are going to be sending an amazing message and using it to motivate members to work out longer and harder. Places of high use are where you're really going to see the benefits."

Manufacturers vary in the ways they communicate how much energy their people-powered equipment is capable of producing. For example, PlugOut Fitness says typical users will be able to generate between 50 and 150 watts during a single workout - enough to power a cell phone for a week. By contrast, an elliptical machine in regular use at a commercial facility using ReRev technology generates an estimated one kilowatt-hour of electricity every two days; that's the same amount of power it takes to run a laptop for 24 hours or a vacuum cleaner for 45 minutes. 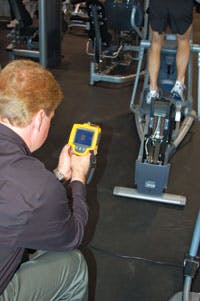 A thermal-imaging camera captures the amount of wasted energy generated by an elliptical user before the machine is retrofitted with ReRev equipment. (Photo courtesy of ReRev)

This much is clear: The concept is catching on. One obvious indication of that is the Energy Civil War, held between the University of Oregon and Oregon State University during the week leading up to the schools' annual "Civil War" football game. Officials at each university keep track of the number of calories participants convert to kilowatts, and then tally up the results. Oregon won the 2010 battle, as students, staff and faculty generated 21,600 kilowatt hours of energy on equipped machines between Nov. 29 and Dec. 3; Oregon State participants managed to generate 20,000 kilowatt hours. Collectively, UO and OSU generated 75 percent more energy than they did during the 2009 Energy Civil War.

It's no surprise that manufacturers in this market segment report the greatest buy-in at college recreation centers, where there already exists an environmentally aware user base. But the concept is making strides in other facilities, too, including health clubs and municipal recreation centers. And it holds great promise for high schools (where calculating energy savings and converting kinetic energy could become part of math and science curriculums) and military bases (where power is at a premium in some remote locations).

"People are ready for the idea now, and it has legs," says SportsArt Fitness product manager Bob Baumgartner, who has been involved with the Green System since its inception. And if facility operators can give exercisers additional incentives to work out - essentially helping the environment while helping themselves - the message behind that idea holds even more juice. "We understand that we just can't put something like this in the club and have people realize the impact they're making," Maechler says, adding that SportsArt Fitness plans a major promotional and branding campaign for the Green System's early adopters. "Facility owners are not just buying a new piece of equipment; they're buying into a new marketing message."

Manufacturer-driven technology that details how much power facility users generate individually and collectively on an hourly, daily, weekly, monthly and yearly basis make it easy to engage in competitions with facilities on the other side of town or on the other side of the country, as well as create new fundraising and educational opportunities. Predicts Harr, "This is going to make equipment even more of a fitness product than it was in the first place."

The result of combining fitness with sustainability - "two really positive industries," as Harr puts it - has not happened without growing pains. Consider the debate over the role batteries should play in the conversion of kinetic energy into AC power. While The Green Revolution wires exercise bikes into a central battery that can store energy, other manufacturers eschew batteries, citing efficiency, cost, size and disposal issues.

Besides, adds Baumgartner, the process of converting people power into facility power is already complicated enough. The Green System, which does not require batteries, is in the process of gaining UL approval. "We still have a long way to go in some respects," he says. "We're working through the approval process, and that's a challenge. We understand what it takes to get UL approval for a fitness product, but to get approval for a product that actually produces power and sends it back to the grid requires a whole other set of compliances."

Harr says all of the effort involved with helping create a new product category has been worth it. In fact, he doesn't see an alternative. "With humanity growing by leaps and bounds and emerging markets doing what they're doing without even a full rebound in our economy, we will run out of power," Harr says. "It was so easy for so long to just drill a hole in the ground and have an abundant source of energy at our fingertips. I don't want to see our standard of living decline because we didn't think about the future. Is ReRev solving any great problem? Absolutely not. But it's starting a discussion."