Sharla Alexander was having a great time in Hyderabad, India. As the logistics coordinator for the U.S. Armed Forces women's soccer squad at the fourth Military World Games in 2007, Alexander was aglow with "Friendship Through Sport" - the motto of the Conseil International du Sport Militaire (CISM), the Games' organizing body. 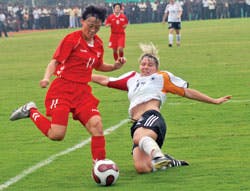 Sharla Alexander was having a great time in Hyderabad, India. As the logistics coordinator for the U.S. Armed Forces women's soccer squad at the fourth Military World Games in 2007, Alexander was aglow with "Friendship Through Sport" - the motto of the Conseil International du Sport Militaire (CISM), the Games' organizing body. She had breakfast one morning with her counterpart from, of all places, North Korea, one of President George W. Bush's "Axis of Evil," a tiny nuclear power in the hands of a dictator and a constant burr under the saddle of the U.S. and its allies.

"We were talking through a translator, laughing and telling jokes, and he said, 'We laugh today, I shoot at you next week,' " Alexander recalled a fortnight before July's fifth Military World Games, a gathering of armed forces athletes from around the globe who meet every four years in a show of unity and solidarity through sport. Alexander had nothing to fear, even had the U.S. and North Korea been at war following the event. She is a civilian, the facility director at the Short Fitness and Sport Center on the grounds of McDill Air Force Base in Florida. Still, the incident brought into sharp relief one of the reasons the Games are special.

"It's truly one of the most important things that some of these athletes can do for this country, even more so than carrying a gun," says Alexander, who has participated in three Military World Games. "It's amazing to watch."

With more than double the number of countries as participated in the Pan American Games, the Military World Games is the Olympiad for the world's military athletes. Held July 16-24 in Rio de Janeiro, the 2011 Games featured 110 countries, approximately 5,000 athletes in 24 sports, and roughly 10,000 volunteers.

Its staging was the second of a four-event package of huge international sports competitions Rio has claimed in host-city showdowns this century - the 2007 Pan American Games, the 2011 Military World Games, the 2014 FIFA World Cup, and the 2016 Summer Olympics.

"The golden decade for sports" is what it's called by Navy Captain (Ret.) Marcio Agnese, the Games' governance coordinator for the Foreign Missions Support Commission.

Agnese says most of the venues used for the Pan American Games also were used for the MWG. Joao Havelange Olympic Stadium, built for the Pan Am Games, hosted the opening ceremonies, track and field events, and soccer. It will also be used in the 2016 Olympics, as will such MWG venues as the Maria Lenk Aquatics Center (swimming), the Maracanazinho Arena (volleyball), the National Equestrian Center, the National Shooting Center and the Deodoro Modern Pentathlon Park.

One of the three Military World Games athletes' villages, built for the Games, will be used in 2016 for all referees and some administrators, according to the CISM, an international military sports association composed of the Armed Forces of 132 member nations. Taken together, the three villages' 1,206 apartments in 106 buildings have the capacity to house up to 8,332 athletes. The complexes also feature laundry services, transportation, convenience stores and workout rooms.

"We're talking about something equal to the Olympics," says Ken Polk of the Armed Forces Sports Office. "It's a special opportunity for us to showcase our military." (The Games are, in fact, the second largest international athletic event after the Olympics.) Polk says these Games were unique in that the U.S. chief of delegation, Major General Salvatore Angelella, attended, a first for a U.S. chief of delegation. (Each country at the Military World Games has a COD, a General-level representative.) "It's a real highlight," Polk says.

Another highlight for the U.S. involved a real rarity. On July 13, two members of the Armed Forces women's soccer team - Capt. Wendy Emminger of the 305th Operations Support Squadron Flying Training Unit and 1st Lt. Amanda Messinger of the 32nd Air Refueling Squadron - flew their team and the men's and women's track and field teams from McDill AFB to Rio.

The pair, in the 305th Air Mobility Wing based at Joint Base McGuire-Dix-Lakehurst, N.J., flew a KC-10 Extender to McDill, where the teams were staging. The KC-10 is an Air Mobility Command advanced tanker and cargo aircraft used primarily for aerial refueling - "A big gas-station in the air," Emminger calls it - that can simultaneously carry fighter support personnel and equipment on overseas deployments.

The pilots have to fulfill certain requirements, and flying an overseas mission is one of them, says Emminger. The opportunity presented itself at the team's tryouts in March.

Emminger, the soccer team's captain, has accumulated more than 2,700 hours in six years of flying. Messinger, who was making her first appearance on the team, served as co-pilot. Polk says the happy coincidence was a nice change from the commercial airline experience that athletes usually endure.

Also in flight for the Military World Games was the Army's Golden Knights parachute team, the Department of Defense's most successful sports team. At the 2007 Games, the women's team won the formation skydive and took second overall; the men placed second in the formation skydive. Parachuting is one of the only MWG sports in which the U.S. team was expected to be favored at the 2011 event. The women's basketball team placed third at the 1st CISM World Military Women's Basketball Championships in South Korea in September 2010. The men finished sixth in the concurrent 50th annual men's championships. (Click here for updates on the 2011 Games.)

U.S. athletes earn MWG participation through competitions or tryouts, but teams don't get many opportunities to practice together. "We pick teams based on their athletic ability and their availability," says Polk. "They're all service members, and their duties come first. We don't have the luxury that other countries have; they have a strong reserve component with a lot of professional athletes. We're not structured that way anymore. We're at a disadvantage."

Alexander says any success is a testament to the U.S. athletes' spirit. "We're very tough competitors, but we don't fare real well," she says. "We're competing, especially in team sports, against people who train together year-round. Even a country like the Netherlands - they're not professional athletes, but the country's so small, they train together all the time. We pull our military folks from all over the world. It's tough to get them off their jobs to be able to represent the U.S."

Injecting some Brazilian flavor into the MWG were two demonstration sports, men's and women's beach volleyball. The U.S. had an Armed Forces championship to decide the MWG participants; two men's and two women's teams played at Copacabana Beach.

"The culture we go to is totally different every time," Alexander says.

That culture will have a Far Eastern flair in 2015, as Mungyeong, South Korea, won the bidding to host the sixth MWG. (The second Winter Military World Games will take place in 2013 in Annecy/Chamonix, France.) South Korea's major-event experience includes the 1986 Seoul Asian Games, the 1988 Summer Olympics, and the 2002 FIFA World Cup. On July 6, the International Olympic Committee awarded Pyeongchang, South Korea, the 2018 Olympic Winter Games.

Although Armed Forces appropriations are on the verge of major cuts, it's certain that U.S. men and women will be in Mungyeong in force four years down the road. Even if the 305th Air Mobility Wing is unavailable to fly athletes there.