How to Succeed in Membership Sales 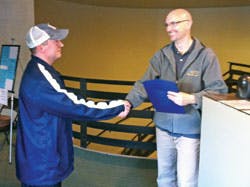 Practicing phone calls, interviews and tours with each other helps prepare staff to make the sale to a potential client.

Sales processes and behavior need to be worked constantly, and as soon as you think you know what you're doing or that your staff is executing superbly, you're going to lose business.

With a business like ours, where there are no dedicated salespeople, hearing just 10 seconds of a phone conversation with almost any prospect would make you cringe. Staff people handle tours with all the elegance of teenagers at a high school dance ("You go first". . ."No, you!"). Listening to them present pricing makes you wonder if English is their first language.

Even with dedicated salespeople at high-powered, sales-focused clubs, it's often not much better. We once phantom-shopped a franchise of a large nationally known club chain. We filled in the overly intrusive paperwork and then had our pre-tour meeting with the salesperson. Rob said he was most interested in the free weights, while Barry said he had a new baby at home and needed to see the childcare area, and his wife was interested in taking classes. Our salesperson pretended to listen, wrote it all down and then proceeded to give us the same generic tour that anyone else would have received, with not one reference made to the details we had so tediously been asked to divulge just minutes earlier. (As an aside, the best moment of that whole experience was when Rob was asked the ridiculously Oprah Generation question, "When did you last feel great about yourself?" to which he replied, without missing a beat, "Before I was married.")

We are happy to admit that we're not very good at selling, but what we have done well recently is create a sales culture that is consistent with everything else we do in our business, and our staff has responded positively. We think this is a formula for other clubs to follow, and it's pretty simple:

1. Slow down on the phone. The first question from 99 percent of health club prospects is, "What's your price?" They ask this because they don't know what else to ask. We believe clubs should answer this question over the phone, but not right away. After all, you don't know anything yet about this prospect. What price are they asking about? Do they need a full membership, or maybe a limited membership (pool only, restricted hours)? Maybe they work for a local employer who has a corporate deal with you. So, we ask our staff to slow the conversation. But how?

2. Ask questions. We once challenged a group of employees at a high-end fitness facility to a contest in which we would take a prospect's phone call on the spot and likely do a better job with it than they were doing, even while knowing virtually nothing about the specifics of their gym. They didn't believe it was possible, but they had to agree that we were better than they were. Our secret was simple. All we did was ask questions of the prospects. What caused them to call today? Had they ever been members of a gym? What were their goals? Had they visited any local facilities? Would they like to visit this facility?

The problem was these employees had no idea what to ask. So. . .

3. Script everything. When our staff is asked, "What's your price?" we expect the response to go something like this: "I'll be happy to give you our prices, but may I ask you a few questions first so that I know I'm giving you the right information? By the way, my name is (your name here); may I have yours? Thanks. . ." And then we get to some key questions that we really need to know in order to both a) honestly provide the correct information to this prospect, and b) establish some rapport and trust, because we really do want to differentiate ourselves from our competition and have this prospect come in.

4. Listen. The point of the scripts is not just so our staff doesn't fumble. The point is to free up their thinking so that they will listen - really listen - to what the prospect is saying. Then the conversation will go off-script, and hopefully our staff person and the prospect will actually be communicating.

This is especially important during a tour of the facility. It should be obvious that someone who wants to see the weight room should not begin their tour in the group fitness studio, but what we really want our employees doing is listening, not talking. At that point, our staff person's job is hopefully relatively easy and he or she can take the next step.

5. Translate what the prospect needs into what you offer. Does this prospect belong as a member of our club? We don't want him if we can't make him happy, and if there's someplace he'll be happier, we'd rather send him there. This is the step that is easiest for our staff, because they know what we do well and are proud of it. The trick is finding out what is best for the customer and see if we're the right fit. We want our staff to understand and internalize that this is selling at its finest. Are we the right fit for the customer? If so, then we should be doing business together. If not, he or she should not join.

6. Ask the prospect to join. If we do have a fit, we ask our staff to do only one very sales-like thing, which is simply to ask the prospect if he or she would like to join today. We don't need the prospect to say "no" three times, and we don't have sophisticated "Join Now" offers. But we ask.

7. Rehearse, role-play, repeat. The more practice everyone gets at customer interactions, the better they are. We role-play phone calls, tours, signing the contract, explaining the cancellation policy, and everything else we can think of. We script it all to make it as easy as possible for everyone, and then we make them practice, and we discuss in real time what happens day to day. The practice and feedback doesn't stop.

After all, it can't. We're terrible at it. We do all this in the hopes that we'll improve.