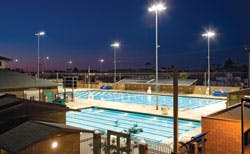 A year ago, natural gas prices were nearly three times what they were in 1999. Now they're only twice as high. But heating a commercial swimming pool still takes a chunk of change, especially when you consider the relatively cheap power available from the ball of superheated hydrogen and helium that can be viewed, most days, up in the sky.

It used to be that solar pool heating's primary drawback, even in places where clouds are scarce, was an equipment payback of between eight and 10 years. Aquatic consulting firms such as Carlsbad, Calif.-based Aquatic Design Group now estimate the return on investment at more like four to six years, while manufacturers such as Suntrek Solar of Irvine, Calif., now claim an ROI of less than three years.

"We prefer to be conservative with our numbers, but solar's great," says ADG principal Randy Mendioroz. "Natural gas represents 70 percent of the utility usage for a typical pool, and it's doubtful that natural gas prices will go down. Given these realities, we've got to look at things like solar. Thermal solar is the best technology available at present to reduce that 70 percent figure and keep pools running."

Nationally, consumers have lined up, even in recessionary times, to take advantage of a 30 percent federal tax credit for energy-efficient upgrades to residences. No such large-scale tax credits exist for pools, however, since pools (specifically, residential pools) are seen as luxury items. Roy Heine, president and CEO of Suntrek Solar, says this demonstrates the accuracy of his lower ROI estimate. "The technology does not need a tax credit to justify the investment," Heine says. "If it can pay for itself in less than three years, why should the government subsidize it?"

One bit of movement on the federal level is a coming push by the Solar Energy Industries Association to get commercial pool heaters inserted into the federal Solar Investment Tax Credit. Dan Sizelove, marketing coordinator of Aquatherm Industries Inc. in Lakewood, N.J., says "It's far from a done deal," but adds that the industry is counting on SEIA's clout to make it happen.

Energy-related tax credits and rebates are typically offered by utilities and by state and local governments. One example is Savings By Design, a California energy-efficiency program for non-residential new construction and renovation/remodeling projects that is funded by Pacific Gas and Electric Company, San Diego Gas & Electric, Southern California Edison, Southern California Gas Company and the Sacramento Municipal Utility District. Through the program, architects get design assistance and building owners can receive grants of up to $150,000 per project to help pay for investing in energy-efficient design.

Finding incentives that are applicable to small projects such as solar pool heating is the trick. Fortunately, aquatics consultants and pool suppliers are knowledgeable about any incentive that might save clients money, and remain the best source for current information. In addition, there's the Database of State Incentives for Renewables & Efficiency, an extremely valuable resource featuring a URL that should be typed with care (www.dsireusa.org).

California has long been on the leading edge of incentives related to solar energy. Following the energy crisis of the early 1970s, a statewide program provided reimbursements for up to 50 percent of the cost of a solar heating system. During this decade, a bill passed by the California Legislature required that solar energy equipment be installed on all state buildings and state parking facilities, and on all state-owned swimming pools currently heated with fossil fuels or electricity. And as part of Title 24, Part 6 of the California Code of Regulations, which goes into effect Jan. 1, all public agencies considering constructing a commercial pool must first perform a solar feasibility study.

The greatest action on the incentives front currently comes not from legislatures, but from third-party power purchasers and equipment manufacturers. A rapidly growing business model, similar to cap and trade, involves a Power Purchasing Agreement with an outside firm that finances the purchase of a municipality's or school's solar equipment, and in return collects the tax write-off for which the public (that is, already tax-exempt) agency is not eligible. The California Solar Center offers a free guide to PPAs (www.californiasolarcenter.org), which are arranged by a number of different power purchasers, mostly in California and in other sun-rich states such as Arizona, Texas and Florida.

Solar equipment manufacturers will also arrange third-party PPAs for potential clients, as well as a similar but separate arrangement in which the manufacturer installs a system gratis but then charges the facility owner power at a discount over the length of a 10-year contract. "With these kinds of arrangements, the pool owner can go green without making a capital outlay or incurring any liability," Heine says, "and instead just pay for green power at a reduced rate."

Heating the pool in green fashion is often not looked at in isolation - facility owners are more likely to invest in an overall strategy to power the pool heater, the locker room's hot-water heater and some portion of the facility's electrical system besides. Unlike pool heating, these latter two installations are, in fact, eligible for a 30 percent federal tax credit.

"We'd much rather not have to rely on incentives to move a product - we want capitalism to just play its course," Heine says. "But the incentives can make a big difference. When it's all said and done, between utility rebates, tax credits and the like, sometimes 80 to 90 percent of an investment in solar can be subsidized by the government."