College Coaches on the Front Lines of Crisis Management

Penn State replaced Joe Paterno, but Jerry Sandusky has been harder to shake. His name seems to appear whenever the university makes news lately. In the first 10 days of January alone, the public learned that Bill O'Brien had been hired as head football coach, that Joe and Sue Paterno had donated $100,000 to Penn State since Paterno's November firing, and that the university had given its newly minted president Rodney Erickson a contract through June 2014. All accounts mentioned Sandusky, the former PSU assistant football coach charged last fall with sexually abusing children. When Jay Paterno, Joe's son and longtime assistant, revealed that he, too, would be leaving the sidelines in State College, he stopped short of mentioning the scandal by its namesake, but thanked "Penn Staters" for their support "through the tumult of the past several weeks."

Moreover, stories specifically about Sandusky - one involving new allegations of a 2004 on-campus assault and the latest, as of this writing, about how the former coach's memoirs helped police investigate his alleged sex crimes - have yet to cease.

This is what Kathleen Hessert calls a chronic crisis, and it could last at least a decade - perhaps longer, considering that the Sandusky scandal has been widely characterized as the worst in college athletics history. It's how universities and athletic departments conduct themselves before and during a crisis that can mitigate the damage and its duration, according to Hessert, who counts Penn State among the clients of her Charlotte, N.C.-based consultancy Sports Media Challenge. But given the nature of the Sandusky case, which involved another assistant's 2002 eyewitness account that somehow fell through cracks in the PSU chain of command, as well as subsequent allegations that an assistant men's basketball coach at Syracuse University had sexually molested children, coaches have suddenly emerged as key players in crisis management.

"Coaches are under siege and the trust is gone, and now every coach is suspect, unfortunately," says Hessert, who addressed the American Football Coaches Association's annual convention Jan. 10 in San Antonio. "Crisis management has become a core competency that they're going to have to master."

Grant Teaff, a former Baylor University football coach and the AFCA's executive director since 1994, recognizes the new reality for his association's 12,000 members, which represent a mere fraction of the football coaches working at every level across America. "If we don't learn from bad things that happen, then we're missing an opportunity," says Teaff, who took the rare measure of speaking at the convention himself. "My goal is to always come out of any experience better from it and having learned lessons that will be applicable to our own situations."

One key component of crisis management is effective communication, a particularly difficult task for individuals under duress. "The Red Cross did a study once that said when you're in trauma, you think at half the speed you do under normal circumstances," Hessert says. "Well, if you're thinking at half the speed, and at the same time you're being barraged with a thousand times more information, and vital information, how do you work through that?"

You get outside help, Hessert advises. Consider the case of Syracuse head basketball coach Jim Boeheim, who managed to steer a top-ranked team through the first half of a season tainted by accusations in mid-November that Bernie Fine, an assistant to Boeheim for 36 years, had abused former ball boys. Some thought Boeheim wouldn't survive the week after the coach called the accusations "a bunch of a thousand lies" and that the accusers were looking for a payday. It was an awkward defense of a longtime friend, according to Hessert. "I would certainly have counseled him to do something else," she says of Boeheim, who later apologized for his initial statements. "Coaches are human. He acted in a human way by wanting to believe and stick up for a friend. But, he didn't know all the facts, and he responded before he did. In the heat of a crisis, you never have all the information."

And that's okay, Hessert adds. "One thing I tell clients, especially in crisis, is to bucket information into three different categories: This is what I know, this is what I don't know, this is what I'm going to find out. When you respond to something with those categories in mind, you don't have to come back and reverse yourself or try to remember what you said. You're not responding good or bad to whatever is happening at the time without all the information that you need to take a public stand on it."

Such restraint can be a lot to ask of a coach, though, and Hessert recommends that coaches retain the ongoing services of strategists before crisis strikes (and be willing to enlist the services of trauma counselors if and when it does). "Coaches have to stand alone and make decisions when everything is on the line. That's normal," she says. "I think Boeheim was reacting the way he normally has to react, but the situation was not normal. And coaches don't often have strategic counselors who can help them figure that out. Too often, coaches insulate themselves. Their inner circle is so very small, and they don't seek outside perspective. It's not natural to them until they're in deep, and then they look for help."

As the Penn State scandal in particular illustrated, the insular world of coaching can have tragic consequences in terms of recognizing a crisis in the making. "A coach can't manage the situation [alone]," Oregon State athletic director Bob De Carolis told the Corvallis Gazette Times, which reported in late December that the university was reviewing its crisis management policies and protocols. "You need to get it in the hands of the professionals, if that be Oregon State Police. You hope the professionals do the right thing. We try to instill in our people to get it out and get it fixed."

The Kansas Board of Regents, meanwhile, ordered officials on six campuses in that state to put in writing policies that make mandatory the reporting of sexual abuse. "We want to make sure that no one ever believes that their job is more important than the safety and protection of a child," said KU regents chair Ed McKechnie, as reported by the Kansas City Star.

At least eight states have looked to expand existing abuse-reporting laws or stiffen penalties for apathy. In California, Connecticut and New York, proposed legislation specifically mentions college coaches. Still, abuse experts fear that such laws may overload the legal system with reports based solely on suspicion. In Missouri, where teachers, physicians and clergy members are required to report suspected abuse, proposed legislation would require reporting by any individual, regardless of profession, who is a firsthand witness to abuse. "This is a very measured approach," said Republican state senator Eric Schmitt, as reported by the St. Louis Post-Dispatch. "This doesn't deal with suspected abuse. It is tailored only to actual sexual abuse that is witnessed, just like the situation at Penn State."

Such laws, if passed, "will change everything," according to Hessert. No longer will a coach be off the hook simply by following the chain of command and reporting suspected or witnessed abuse to a superior. "Coaches will have to be educated," she says, "and they'll be responsible to act in a different way."

Coaches already deal with crisis in a different, more personal way than university presidents, regents and athletics administrators, according to Teaff. "As leaders, teachers, husbands and fathers, we have a responsibility to live up to, and when action is needed, action should be taken. All of us have a responsibility to do the right thing at the right time," he says. "I think a great teaching point came from Coach Paterno's words when he said after the fact, 'I wish I had done more.' Let's learn from that and act when we need to act and never get to a point in our lives when we look back and say, 'I wish I had done more.'" 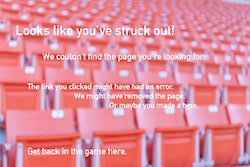 The Denver Parks and Recreation Department is warning pickleball players that they can be ticketed if they shovel snow from public courts.
December 1, 2022
Page 1 of 149
Next Page
AB Show 2022 in Orlando
AB Show is a solution-focused event for athletics, fitness, recreation and military professionals.
Learn More
Buyer's Guide
Information on more than 3,000 companies, sorted by category. Listings are updated daily.
Learn More