Congratulations, Shannon Eastin! Congratulations to the NFL for breaking one of the glassiest glass ceilings in professional sports! Scab!

Yesterday's news, that this veteran of the Mid-Eastern Athletic Conference "will be the pioneer and perhaps an inspiration for others to follow" (USA Today) by officiating as a line judge in Thursday's preseason game between the San Diego Chargers and Green Bay Packers, is in fact an opportunity to show that women and men can perform this vital role with the same professionalism and dedication. That gender should not come into play when seeking qualified individuals to referee athletic contests between two teams of men. That when the immensely profitable league and its employees square off over pay, might makes right and the league will prevail. Equal rights - yes! Better pay and working conditions - no!

The NFL locked out its officials after last season, and supposedly has been negotiating with them since last October. The issue is money - the NFL's part-time referees start at a salary of $78,000, and in spite of record revenues and profits, the league is offering them a five- to 11 percent raise, their first since 2006. Tony Michalek, an NFL official and the league's director of officiating, noted on Facebook last week that the league's addition of an eighth on-field official without raising its overall budget for officials will depress collective pay, and this after the league froze and then eliminated the officials' pension system that it had established in 1974 and administered since then.

The league counters that it's a recession, and we all have to tighten our belts. But the league has also, in this age of concussions, determined that its referees will now be trained as the first line of defense in the fight to maintain player safety. That means that officials' job descriptions have gotten significantly more complicated and time-consuming, adding concussion awareness training to the estimated 25 to 35 hours of weekly preparation time the typical referee spends between July and January studying rules changes and new, league-directed points of emphasis; maintaining physical fitness to be able to run up and down the field during games; and traveling around the country weekend after weekend.

Others' take on this sorry situation will no doubt be different than mine. NFL officials only do this part time, and many have other, more lucrative jobs (Ed Hochuli, for example, is a successful trial lawyer). On a per-game basis, an NFL official will start at a little less than $4,000 - an impressive amount for three hours of work. 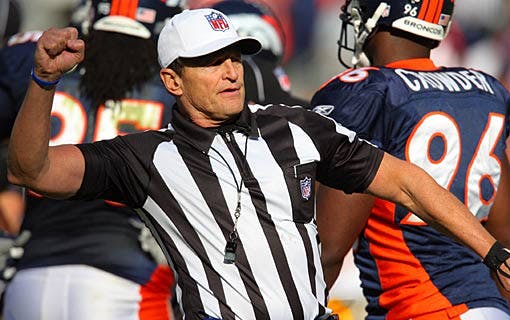 But it's obviously more than three hours of work and meanwhile, the NFL is nakedly working to build resentment among its largely blue-collar fan base by fomenting the same kind of outrage as it has managed to do in all its dealings with the NFL players' union. (Why don't those millionaire players just shut up and play! I'd do their job for free!) And while it does this, it is hiring replacement workers like Shannon Eastin in the greatest insult to its longtime officials and to fans' collective intelligence, claiming that these relatively inexperienced new officials are just as good as the ones they replaced. That's page one in the league's Labor Relations playbook: That's our offer. If you don't like it, leave.

Since my inclination in those past battles has been to back the millionaires against the billionaires, I'm not about to back the billionaires over this group of 120 officials who under normal conditions the league would be touting as the best in the world, deserving of our admiration if not more of the league's huge piles of cash.

So when Shannon Eastin takes the field Thursday, I'm going to cheer for her for breaking through all barriers and joining the boys' club. Way to go, Shannon! You're an inspiration to me and countless girls and women all over the world! Scab!