Identifying the Right Video Surveillance Technology for Your Stadium

Understand all of that? If you're a security professional working in an NFL stadium or other pro-level athletic venue, probably. High school athletic director? Probably not.

"What if you wanted to capture the face in every seat? That was the objective we had in Metlife Stadium," says Scott Schafer, executive vice president of sales and marketing for Arecont Vision, the Glendale, Calif.-based security firm behind the camera technology deployed at MetLife. "Do you want that for every stadium? Not necessarily."

The video surveillance system at MetLife Stadium represents the upper limits of what can be accomplished with today's surveillance technology. Not every venue needs that same level of security, nor has the budget or expertise to employ it. "A small rec department with tennis courts and ball fields probably doesn't need the high-end features," says James Marcella, director of technical services for Axis Communications' Boston headquarters. "It could deploy a handful of cameras recording at 720p using a free software application with onboard storage." 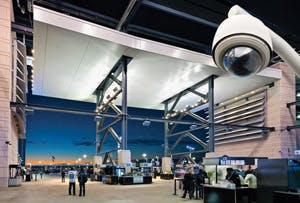 KNOW YOUR TECHNOLOGY
For those unfamiliar with the basic technology employed in a video surveillance system, the task of selecting the right one can be daunting. Even for facility operators who think they know something, keeping up with the latest technology is difficult.

"Using security as a tool during a game has changed dramatically over the last three or four years because the technology that underlies video security solutions has changed a lot," Schafer says.

So what does the latest technology offer? And why does it matter? Let's take a look:

Resolution. Everyone with a television or computer monitor is likely familiar with this term, as well as the units used to measure it, pixels. "The first thing we talk about is HDTV video," says Marcella. "That has expanded from 720 pixels to 1080p, now up to 4k. When we talk about professional sports and broadcasting, most things like the Super Bowl and World Cup are broadcast in 720p, but 4k is an HDTV standard."

In broadcasting, the goal is to create the clearest image for the at-home viewer. In surveillance, says Marcella, that translates to image usability, which is defined by detection, recognition and identification. "For a person, that generally requires 80 pixels across the face," he says.

To get the clarity needed for image recognition, camera operators used to employ pan, tilt and zoom technology, which required knowing where to look and when to get a usable image. But as camera resolution has improved, the need for the zoom feature has decreased — as has the need for as many cameras.

"People can view and discern what's going on with 100 cameras where 2,500 to 3,000 would have been needed before," Schafer says. "That's a lot of cables and equipment."

Frame Rate. Frame rate may be the most commonly encountered term after resolution. "To be compliant with the HDTV standard, your camera has to be able to record at least 30 frames per second," Marcella says, noting that that doesn't mean a camera actually has to do so.

Like higher resolution, higher frame rates contribute to smoother, clearer video. "Imagine watching someone walk into a room 15 feet, pick something up and walk out," Marcella says. "It's a very different experience watching it 15 frames per second or two frames per second. Lower frame rate is less situational awareness."

More frames per second are preferable but not always practical, increasing the amount of bandwidth required to transmit the information and the required amount of storage. "A lot of times these cameras will have multiple viewing channels," says Schafer. "It might a be a live feed that's being viewed at 20fps, but it's only being recorded at 2fps."

During the week, facility operators may specify recording at a lower frame rate and then increase it on gameday. "Some stadiums might even do less than one fps to conserve storage," says Schaffer. "It all has to go somewhere and get stored on a server. That's where your storage requirements come in."

Networks and storage. Cameras represent a small fraction of the overall cost of a surveillance system, with the cost for cables and storage servers quickly adding up. As such, facility operators need to consider what they intend to do with the video being captured in their venue. Is it being stored for review in the event that something does happen? Is it being actively monitored during a game or other event? Both?

"The network camera is connected to a network cable, then connected to a switch and a server," Schafer says. "That was a big change in our industry maybe 10 to 15 years ago, when the first devices were using IP networks."

Server storage capacity is also an improving area of technology, but for now, facilities must still make choices about what data they want to save and what they want to ditch. "The everyday stuff isn't usually saved for very long," says Schafer. It might be recorded and overwritten within a matter of days or weeks, while video from a game and the hours before and after, as well as video focusing on high-target areas, might be kept longer.

Storage servers aren't a requirement for all surveillance systems. For smaller, low-risk surveillance areas, the same storage can be achieved with an SD card installed into the camera. And for areas such as a high school, the investment in storage can be minimized by working with existing surveillance systems. "One server with five to 10 cameras would be enough for a high school," Schafer says. "You might be able to put that on the school system and not have it require a server of its own."

The new compression standard promises to reduce bandwidth and storage by 50 percent and is being used in the consumer electronics world, though it hasn't become standard just yet. Axis has developed a software solution called Zipstream that can offer similar savings to H.265 without requiring a change in software. "In areas with no movement, like my office, I can compress the video much higher than I would be able to compress myself, moving back and forth in the room," Marcella says. "We call these dynamic areas of interest — you have videos that have maintained the movement in the areas of interest, and in areas of no movement, we compress higher and save on bandwidth and storage."

Light sensitivity. Extreme light levels can wreak havoc on a camera's ability to capture clear images. "Low light is the enemy of all video," Schafer says. "But there are a lot of low-light technologies that have been deployed in security applications, and they get better and better. We're seeing a whole new set of sensors for light-sensing."

"There's a technology called light finder," adds Marcella. "It allows cameras to provide color imagery down to below one lux — one lux is a dark room, zero lux is an absence of light. Most cameras default to black and white in those conditions."

Wide dynamic range, or the ability of a camera to record usable images in a range of lighting conditions, is also improving. In bright-light conditions, this technology allows the camera to adjust and filter out more light rather than returning a washed-out image. "That's not a problem as much in outdoor applications where light is pretty constant and the camera adjusts," Schafer says, "but it's an issue when you have hallways and doors that can open into bright lights, or a tunnel looking onto a field that combines low light and bright lights."

Software. All of the changes in video technology don't necessarily mean a facility operator needs to run out and update his or her software package. "The hardware and software aren't interdependent," Marcella says. "If I wanted to roll out the latest and greatest camera, I don't have to change my software. We always say check with the software manufacturer, but it's very rare that that doesn't happen."

That said, the options for software in surveillance systems are constantly expanding. A number of software applications can be installed on the camera itself, as opposed to those utilized at a central command station. "Maybe you want an analytic called cross-line detection," Marcella poses. "If someone walks across a line in the screen, it alerts you. You can purchase, download and install that.

"Maybe you want people-counting," he continues. "That's another analytic. An active tamper alarm is another nice feature — any time there's a change, whether someone sprays the lens or slowly moves a camera, it alerts you."

Operators can easily find or create free applications to track what metrics they want, or they can pay for professionally developed software packages. It all depends on what a facility needs, and how much operators are willing to spend. An added note of caution: the more expensive the system, the more features, the more training required to know how to use it. "Analytics is really a growth area," Marcella says. "But the sheer quantity of video can easily overwhelm operators."

WHAT'S ON THE HORIZON
Surveillance innovation shows no signs of slowing down. Storage capabilities will improve, software will allow operators to do even more, and cameras will continue to get smaller, says Marcella, noting, "The covert nature of these cameras is becoming very interesting."

Anticipation of better things to come is no reason to hold off on the investment, though, as the various parts of the surveillance system tend to remain compatible. Even older analog-based cameras can take advantage of newer technologies, says Marcella. "Let's say you have a bunch of cameras but want to start upgrading, there are encoders — little boxes that take an analog signal on one side, digitize it, and send it out the other — so that it works with a newer system. You can bridge the analog to digital world and move forward on a scaled approach, which is particularly good if your cameras are serving your needs."

It all comes down to knowing what those needs are — whether it's a professional venue that wants to capture each of the hundreds of thousands of fans walking through its gates each year, or a smaller venue just looking to protect its assets. "You can get an HDTV-quality, 720p camera for $199 that will give comparable usability to one that's $3,000. You'll also find free software apps that give you the capability to monitor, record and leverage analytics, or you can pay $250 per camera for that," Marcella says. "What anyone would find based on their budget as well as their level of expertise is that there are solutions out there from the very small up to the enterprise that leverage these technologies."