How College Athletic Programs Are Preparing for Gun Legislation

The country's attitude toward firearms is changing. As of July 1, Kansas and Georgia will join eight other states in allowing concealed-carry of firearms on public university campuses, with Arkansas joining the campus carry ranks on Sept. 1.

Such legislation pits the nation's biggest Second-Amendment advocate, the National Rifle Association, against the NCAA and its FBS conferences. "Given the intense atmosphere surrounding athletic events, adding weapons increases safety concerns and could negatively impact the intercollegiate athletics program at the University of Arkansas in several ways, including scheduling, officiating, recruiting and attendance," warned Southeastern Conference commissioner Greg Sankey as Arkansas legislators shaped the state's concealed-carry legislation earlier this year.

The SEC proved its might; an exemption was added to prohibit weapons at "firearms-sensitive" venues such as stadiums — provided adequate security measures were in place. The stipulation is similar to that in place in Kansas, where the state requires public universities wishing to prohibit firearms to install metal detectors and place armed guards at facility entrances. "The only way you can keep firearms out of a venue is to provide equipment to ensure that they are not in," says Jim Marchiony, associate athletics director of public affairs at the University of Kansas.

In addition to college campuses, legislation introduced in May in Missouri would repeal a ban on guns at publicly owned sports venues, while similar legislation was proposed (but failed to gain traction) in Washington this past December, heralding the potential for a similar showdown between state legislatures and professional leagues. Expansion of concealed-carry has been a topic in other states as well, putting the issue at the forefront of athletic safety and security discussions. 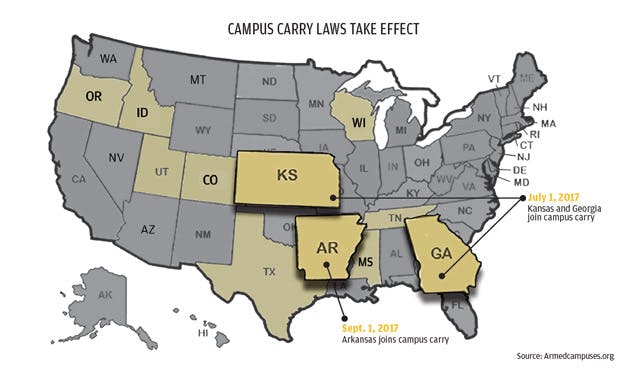 Campus-carry exemptions
Technically, 11 states allow guns to be carried on campus, though Utah is the only state where schools are expressly prohibited from enacting policies banning weapons. Legislation in states such as Wisconsin and Texas allow universities to prohibit weapons if appropriate signage is posted, while other states place specific exemptions on sports venues or venues hosting sporting events.

"Private universities in the state were able to declare if our campuses would or would not participate in concealed- or open-carry," says Ross Bailey, senior associate athletic director of facilities and operations at Texas Christian University, of the state's year-old legislation. "As a university, our leadership decided that it would not allow any kind of carry on our campus."

Legislation may also carve out exemptions for certain classes of people. Tennessee, for example, allows full-time faculty to carry guns on campus provided they have formally notified the campus police, but weapons are not permitted in "stadiums, gymnasiums and auditoriums when school-sponsored events are in progress." And in Texas, off-duty law enforcement officers are allowed to carry their weapons into athletic events. "We do ask them to alert our campus police and our emergency operations center if they will be in carry mode at our events and where they will be seated," Bailey says.

The wording used in some legislation will make interpretation particularly tricky. In Georgia, anyone older than 21 with a permit can carry a concealed weapon on a college campus, excluding "buildings or property used for athletic sporting events." As of this summer, the University System was still unsure whether that definition applied to tailgating areas outside of the venue.

With so many different polices, each with its own set of exemptions and potential interpretations, the task of making spectators aware of the policies becomes the crux of a good safety policy. "We place signage in the parking lots and pathways to the stadium that state what is allowed and not allowed, as well as having similar signage in and around our shuttle bus locations so patrons can get reminded and be able to return something to their personal vehicle before making the path to the stadium," Bailey says.

'Adequate security measures'
Currently, Arkansas and Kansas are the only states that require campuses wishing to prohibit weapons to enact added security measures (though Boise State (Idaho) voluntarily implemented metal detectors at its stadium in 2014). It will be up to each university to determine where to enact such measures and how to fund them. "There are very few places on campus that will be exempted, but athletics has the ability and the urgency to be proactive about prohibiting weapons just because of the environment," says Kansas State University senior associate athletic director for operations Casey Scott.

For now, additional security procedures will only affect football games at Bill Snyder Family Football Stadium and men's and women's basketball games at Bramlage Coliseum. "We deem these as higher-risk environments because of the number of people attending and the emotion and the passion, and associated tailgating and alcohol and things of that nature," Scott says. KU has taken a similar approach, prohibiting weapons at sporting events with more than 5,000 attendees.

New security measures will include metal detectors and heightened security presence. At K-State, Scott estimates the changes will cost approximately $400,000 for equipment and $250,000 to $300,000 per year in additional personnel. "We'll have to hire additional armed officers through our campus police to be stationed at the entrances, and we also have to hire a third-party security company to help us manage the metal-detection operation."

Officials at the University of Arkansas are also hard at work this summer on an updated security plan for Razorback Stadium before the start of the football season. Security plans must be submitted to the state police and approved annually, and must include "use of a magnetometer or other metal-detecting device designed to detect a weapon," or "other measures or devices designed to protect the public from a security threat."

Not a big deal?
Prior to this year, guns weren't allowed anywhere on Kansas public university campuses, including stadiums and arenas. The only thing really changing is that athletic departments now must demonstrate that they are taking steps to ensure that no weapons are brought into those venues, and administrators at KU and K-State anticipate that it will be those procedural changes that have the most impact on the fan experience. "There will be a learning curve, and it will take time for the acceptance of the additional security screening that will have to take place," says Scott.

In anticipation of the security changes, K-State implemented a clear-bag policy last year. "We had quite a communication campaign to prepare our fans for the clear-bag policy," Scott says. "That started as early as February before the season when our season-ticket renewals went out for football. I would say it took almost a full year for our fans to adapt to and feel comfortable with the clear-bag policy."

KU chose to wait until this year to implement both a clear-bag policy and its new screening procedures and is working hard to educate fans about the changes. "What we've done so far is to alert local media and our season-ticket holders and donors that this is happening so they have time to process it, and we'll go from there," Marchiony says.

While many administrators may blanch at the possibility of guns being introduced to the tailgating experience, Scott does not expect the new law to have a significant impact on tailgating areas. "Theoretically, people could have had weapons concealed there in the past, and we would not have checked for them," he says. "We would not have had the ability or the authority."

Both Scott and Marchiony think that the proximity of professional sports organizations will help ease the transition. "I think to a certain degree, people who go to major events are conditioned to clear-bag policies and metal detectors," Marchiony says. "A lot of pro teams have this. The key is for us just to continue to communicate as well as we can. Our mantra is that safety is the number-one issue."

This article originally appeared in the July | August 2017 issue of Athletic Business with the title "Concealed-carry: coming to an athletic venue near you?" Athletic Business is a free magazine for professionals in the athletic, fitness and recreation industry. Click here to subscribe.