Resolving Sound Transference Issues in Fitness Centers Can Be Tricky

Resolving sound transference issues is one of the most challenging aspects in the design of fitness centers. 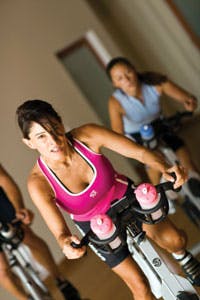 WHIRRED UP Second-floor cardio rooms can cause noise disturbances in spaces immediately below.

He was just a kid, dribbling a basketball in the room set aside for children at an urban health club. Supervision was lax and, at one point, he directed his attention to the wall. Boom! He began hurling the ball. Boom! Boom! He had no way of knowing that on the other side of that wall, a health club member was enjoying, sort of, a massage.

Fitness centers include various spaces meant for various activities, some that produce a lot of noise and others that require a quiet, contemplative atmosphere. Clanging weights and weight plates, whirring cardiovascular equipment, amplified music, the thwack of racquetballs and the pounding of aerobicizing feet and basketballs all have to somehow be prevented from wrecking the ability of staff members to hear themselves think or the mood inside the yoga room.

Or, for that matter, the clinic downstairs. Denver-based Ohlson Lavoie Collaborative, which is experienced in the design of both health clubs and hospital wellness centers, has on a number of occasions been forced to place fitness spaces in acoustically sensitive locations. "We love to get aerobics rooms and weight rooms on the first floor if we can, but sometimes it doesn't work out that way," says David Sprague, an OLC principal, recalling one hospital wellness project in particular in which a small building footprint and competing interests placed the natatorium, gym, locker rooms and medical wing on the ground floor and relegated the fitness spaces to immediately above the clinic. "Docs always want to be on the ground floor. Normally we'll try to put a weight room over the locker room or something, where the noise won't be as objectionable, but in this case we couldn't avoid the problem."

The solution to a fitness center sound problem almost always has many facets. The least complicated (and least expensive) involves working with adjacencies, which can minimize damage to eardrums if not sidestep the problem entirely. Thus, areas that require quiet can be wrapped with a buffer zone of sympathetic spaces, such as storage rooms, locker rooms, administrative spaces or corridors. Chris Savereid, president of Cambridge, Mass.-based acoustical consultancy Acentech Inc., concedes that arranging program and ancillary spaces is sometimes tricky, but says that too many designers (often at the behest of their clients) fail to deal effectively with adjacencies. "People making unwise decisions about where to put fitness centers is one of the things that keeps companies like ours in business," he says. "Can spaces be arranged around the fitness center, both above and below and on the sides, so you're not putting a meeting room right under the aerobics room?"

In new construction, such as the aforementioned hospital wellness center, the building structure can be modified - beefed up, more accurately - to help limit vibration. (Changes to an existing structure can be tremendously expensive.) "You go in with a heavier slab, heavier beams, just to create more mass," says Sprague. "You can also specify a resilient flooring system and acoustical panels, as well as make other purchasing suggestions to the building owner, such as additional pads for underneath weight machines and rubberized weights instead of iron."

STEP ONE Acoustic considerations are best addressed during the design of a new facility.

One large-scale acoustical construction technique is to float a floor above the structural floor. "There are ways of introducing a resilient system that in effect lifts a secondary concrete slab off the structural slab," says Savereid. "As much as possible, you create a 'box within a box' so that rigid connections between the activity space and adjacent spaces are minimized."

While the bottom of the box - the floor - gets an enormous amount of attention in such situations due to the vibration caused by the impact of, say, 20 exercisers doing a Step routine, other sources of noise are also problematic, if less difficult to contend with. Airborne noise, the other source of reverberation, can easily bleed into adjacent spaces under doors and through walls and ceilings. ("If the sound is loud enough, it excites the structure and puts it into motion," in Savereid's words.) Again, the mitigation technique involves decoupling the noise source from the rest of the structure. Walls are constructed on the floating floor if there is one, and in any event are built layered - one wall faced with one or more sheet of gypsum board and filled with sound batt insulation, followed by an air gap, followed by a similarly constructed second wall (and sometimes even a third). Care must be taken, notes Richard Rice, principal of Richard Rice Architects in New York, to construct walls all the way to the slab above, so that sound isn't transmitted over a hung ceiling.

That care, Rice continues, must extend to the entire box - anywhere that sound may spread from space to space. "This is all standard architectural work when you're designing, say, offices," Rice says. "You construct the walls and ceilings in such a way that people aren't able to overhear conversations from one office to another. Ceilings are built utilizing isolation hangers, which feature a clip made of a sound-attenuating material such as neoprene; weather-stripping is used to limit sound transference in the undercut of the door; and ductwork that feeds the rooms is designed so it doesn't transmit sound. I was called in because somebody designed a series of recital rooms in a music school where they returned the air through a common duct that ran across the ceiling of all the rooms, and everybody could hear everybody else. We had to move it to over the hallway and use separate ducts bent in the shape of a U or Z. Make sure your HVAC specialist follows the rule of three bounces - the sound should bounce around three times before it goes from one opening to another. Simple things like that make a big difference."

Prospective health club owners in urban areas sometimes find the perfect space for their new business and forget to think about their prospective neighbors who live or work upstairs or downstairs or sometimes even in neighboring structures. Fitness centers located on upper floors, especially, must be designed with sensitivity toward whatever's underneath them - a bank, a restaurant, a hair salon - as well as whoever lives next door. Savereid suggests that in such circumstances an impact test be performed by the owner, design firm or associated consultants to ensure that the fitness center is easy on the ears. "There's a lot of heavy-duty, low-frequency impact noise and airborne noise associated with a fitness center," Savereid says. "You can't always tell, unless you assess the performance of the existing structure, how much sound will propagate through the building."