Parks Providers Respond to a Growing Interest in Community Gardening

Yielding obvious benefits at relatively minimal costs, urban community gardening has had its champions for decades. 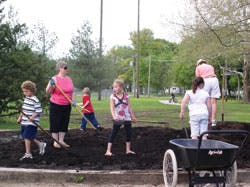 The Topeka Parks and Recreation Department is one of 20 agencies over the past two years that have benefited from NRPA Grow Your Park grants. (Photo courtesy of Grow Your Park)

Yielding obvious benefits at relatively minimal costs, urban community gardening has had its champions for decades. But according to most people who've spent careers digging in the public dirt, it's only been within the past few years that the movement reached full bloom.

"This is the biggest crest I've seen, as far as interest in community gardening and locally grown food," says MaryLynn Pulscher, environmental education coordinator for the Minneapolis Parks and Recreation board, who helps oversee the city's community garden programs. Luci Beachdell, a coordinator of community gardens and programs for Five Rivers Metroparks, which serves Dayton, Ohio, says urban and suburban gardening in the past three or four years alone "has been getting huge."

Ask Pulscher, Beachdell and other gardening experts why interest in the subject has been blossoming, and they'll point to any number of growing economic and societal problems to which community gardening responds - a disconnect from nature, unprecedented obesity rates and the escalating costs of food production.

"The issue of food tackles a lot of these issues at the same time," says Beachdell. "There are a lot of people who have some money and some influence who are suddenly interested in community gardens, and that hasn't always been the case. The local food movement overlaps with community gardening. People want to know where their food is coming from and how it's grown."

While it's clear that society as a whole is more interested than ever in urban community gardening, the role municipal parks and recreation providers have in the movement is a bit more muddy. That's one reason why the National Recreation and Park Association launched the Grow Your Park initiative, which has provided grants for youth-focused and public urban community gardening programs to 20 agencies in its first two years of existence.

"Our goal is to make this an ongoing program," says James O'Connor, senior manager of corporate grants for NRPA, noting that the program has gotten plenty of interest from parks departments but that funding for a next round of grants is still in question. "As the national association, as the voice of parks and recreation, NRPA sees the value in community gardening as a means of connecting children with their communities and with produce."

Agencies in most larger cities, some with full-time horticulturists on staff, have been cultivating community gardens and garden programs of all kinds long before Grow Your Park. (In fact, of the 10 agencies receiving the latest $10,000 Grow Your Park grants in April, most are using the money to expand and enhance existing gardens and youth programming.) But other agencies are only now seeing enough interest on the part of the communities they serve to launch successful food gardens.

"It's a relatively big movement. You're seeing new books being published on community gardening and its benefits; you're seeing documentaries being produced about community gardens feeding low-income and impoverished communities," O'Connor says. "But the question with any community garden is, 'Is there the local leadership and the political will in place to make that land available?'" As Beachdell puts it, "If you're going to go through the trouble of starting a garden, you're going to want to make sure there are people who are going to use it."

Most public parks and recreation providers in urban or suburban areas are naturally well suited to establish community gardens and associated programming for several reasons, not the least of which are core missions to enrich the lives of their citizens. But parks agencies also have the programming expertise, particularly with children, as well as access to open and potentially fertile green space. "In places where you're not rich in land, a community garden run by a park district makes a lot of sense," Beachdell says. "That park district likely has access to space that would be difficult to find or even secure for a long period of time."

O'Connor says that more forward-thinking agencies serving communities with little available space are including gardens in site plans for other facilities, such as recreation centers or sports fields. Land and associated irrigation and security fencing, however, represent only one part of the equation when establishing community gardens that can flourish for years. As with any recreation facility or program, the parks department will have to offer some level of gardening expertise.

"In many cases, the staff on-hand will develop a very basic level of knowledge of horticulture," O'Connor says. "But there is often a very large volunteer component to community gardens. Those are usually self-organized volunteers, often what we call 'friends' groups. Parks and rec may be providing the land, the water and the security, but those volunteers are actually providing the green thumb."

That reality can actually work toward another goal of public community gardens: community-building through intergenerational relationships. "These days, people are always looking for ways to get kids outside, and what's a relatively easy thing you can do outside? Gardening," says Pulscher. "It's really good for intergenerational connections - parent-child, grandparent-child - and it works across cultures, as well."

As NRPA's O'Connor explains, "Many of the folks you'll find in the volunteer support base at community gardens that are operated through parks and rec are retired and have an interest in gardening because they've been doing it their whole lives. By connecting those people in the community with your youngest citizenry, you're giving kids an opportunity to learn about a lot more than just gardening."

By all accounts, creating even the smallest new community garden is no easy task, and there will be growing pains. Programming notwithstanding, water availability and the prevention of produce theft require the daily attention of dedicated staff members during the growing season, not to mention assisting individual gardeners or groups who may be working within community gardens.

"A common type of issue we might hear is, 'I'm going to be gone for two weeks and it's time to harvest. What do I do with my plot while I'm gone?'" says Beachdell. "Another one might be, 'I have a plot in an organic section, but my plot abuts another plot that is not organic, and they are getting insecticide in my garden.' These types of issues are not insurmountable, but they are real issues. I would hate to deter anybody, but putting a community garden in your park is an undertaking."

But for those who've experienced success at community gardening, the bounty is well worth the toil. Says Beachdell, "We've got 350 plots in our parks that individuals and families are renting, improving eating habits and getting produce to food banks. And that's for a minimal cost."