Yoga's many benefits make it an attractive physical education alternative 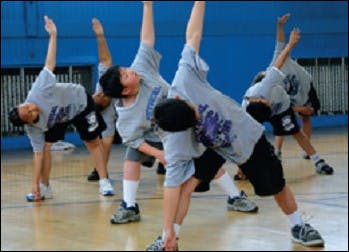 For about a dozen years, students at a handful of Seattle public schools have been practicing yoga as a warm-up activity for physical education classes. At Roosevelt High School, which offers yoga as a physical education elective, students actually sign up to practice yoga three hours a week. "Five years ago, we had three people teaching yoga in our schools," says Bud Turner, coordinator of physical education for Seattle Public Schools. "Now we have as many as 20 instructors incorporating bits and pieces of yoga into their classes."

Indeed, proponents of yoga in schools claim the activity helps students build strength and flexibility, improve health and concentration, and increase stress-reduction and problem-solving skills (see "Yoga's Benefits," p. TK). Turner says Roosevelt's yoga curriculum has also significantly reduced the number of doctor-signed waiver requests physical education teachers receive from students. "We're just trying to get kids interested in physical education," says Turner, who estimates that about three-quarters of Roosevelt's yoga students are females. "There are kids in every high school in Seattle who would take a yoga class if it was offered."

Seattle is far from the only city in the country embracing yoga these days. In fact, The Yoga Inside Foundation, a Los Angeles-based nonprofit organization that helps place volunteer yoga teachers in facilities with at-risk youths (including schools) has reached out to communities as disparate as Gunnison, Colo.; Harlem, N.Y.; Miami; Minneapolis; and Warren, Ohio. "At-risk students have stresses that are inordinate compared to those of the typical high school student," says Yoga Inside director Patina Rodgers, citing the threat of drive-by shootings as one stress that often manifests itself at school. "We feel that yoga is a way of helping kids develop positive self-esteem and find alternatives to negative peer influences."

The Accelerated School, a charter elementary school in south-central Los Angeles, boasts a mandatory yoga program as part of its physical education curriculum. Intended to help young people develop lifetime physical and mental health habits at an early age, the program will be the focus of a research project during the 2002-03 school year. Using money obtained through donations, officials at The Accelerated School plan to measure yoga's effect on student strength, flexibility, balance, concentration, self-awareness and self-control, academic achievement, stress reduction and problem solving. Researchers hope their findings will help expand educational yoga opportunities and programs throughout the country.

Farther up the California coast, the United States Yoga Association has teamed with the San Francisco Unified School District to apply for a federal Carol M. White Physical Education Program (PEP) grant that would bring yoga into 15 district schools for the 2002-03 school year. (Winners of the grant are expected to be announced this month.) That new program would be an extension of a pilot program administered by Tony Sanchez, founder and president of the USYA, which made yoga an integral part of the physical education and academic curriculums at some San Francisco schools beginning in 1997.

Among the more common methods of yoga practiced in schools are Ashtanga and Hatha, systems that purport to integrate mind, body and breath. According to the Yoga Research and Education Center in Santa Rosa, Calif., Hatha Yoga - taken to its greatest lengths - can purify a yogi's nervous system and strengthen his or her body to such a degree that he or she can go without food and water for long periods of time.

When it comes to children and young adults, however, instructors are just happy to get them to practice breathing exercises and stretching postures for 20 minutes. "Initially, the elementary school children were a lot more receptive to doing the exercises than the older kids," Sanchez says about the USYA's San Francisco pilot program. "So we focused our efforts on linking with elementary schools. Those kids' minds are still very pure. The older ones really had an attitude. If the coolest guy in the class was not interested, all the other kids did not want to do it."

"Initially, there was even resistance by kids to take off their shoes and socks," adds Rodgers, who teaches two yoga classes at Metropolitan Continuation High School in downtown Los Angeles. "They mocked yoga."

Some of that attitude stems from the insecurity of trying something new, Rodgers says. Ashtanga Yoga's final resting pose, for example, requires participants to lie on their backs with their eyes closed - a position that initially makes many kids feel vulnerable. Once they realize that the position is key to helping them relax and reap the benefits of a yoga session, however, they begin to feel safer and are more receptive to it.

High-profile converts in professional sports - Shaquille O'Neal, Barry Bonds and Eddie George, among them - are helping bust stereotypes that depict yoga as a wimpy, pseudo-religious activity. In addition, constitutionality fears have led to the elimination (in public schools) of references to yoga's theological elements - including ancient Hinduism, chanting and Sanskrit. "Some people are afraid that all types of yoga have something to do with religion," says Rodgers, who claims a yoga session (ranging from 20 minutes for younger students up to 45 minutes for high school students) is more invigorating than a typical cardiovascular workout. "Yoga can still be very spiritual, because there's that mind-body connection. It is both a mental and a physical discipline."

Take the "New Moon" exercise, during which participants tuck their chins to their chests, slowly bend forward at the hips and touch their hands to the floor. They then grasp their heels and bring their arms around the back of their legs, squeezing their calves firmly while straightening their legs, shifting their weight to the balls of their feet and pushing their hips up. They breathe deeply, focusing on abdominal muscles. Another less elaborate but no less challenging pose, called "the tree," involves placing the inside of a participant's foot on the opposite thigh and then balancing, like a flamingo, for a specific length of time. It's not as easy as it sounds.

Perhaps it's no surprise that yoga has caught on quickest at schools in low-income neighborhoods, where physical education budgets may be small or even nonexistent. The only equipment yoga requires is a mat, and experts say wrestling or tumbling mats work well for most poses if a school can't afford thinner, yoga-specific mats. Also, organizations like Yoga Inside are placing teachers in schools free of charge - even if only for one or two class periods a week. Yoga sessions can be held in a gymnasium, cafeteria, auditorium or even a standard classroom.

In addition, independent instructors can be found in cities all over the country. In Seattle, three yoga schools are located within a short distance of Roosevelt High. But because there is no official certification for yoga teachers, Rodgers warns school administrators to ask potential instructors to provide their training history and credentials (a minimum of two years' experience is recommended). Then confirm information provided by candidates with local yoga studios, and make sure all candidates regularly participate in continuing-education workshops.

Rodgers, Sanchez and Turner agree that yoga can fit into any elementary, middle or high school curriculum. "Our teachers are using other sciences - physics, anatomy, geometry - in coordination with yoga exercises," Sanchez says. "If you have the ability to improvise, you can find a way to make yoga work in any environment."