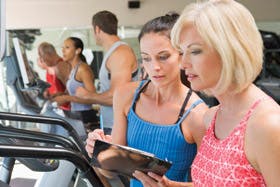 IT CHECKS OUT
Prospective members will get a better sense of your club if they come dressed to work out at a time when things are hopping.
Every January - even the one just past, in the worst economy this side of the Great Depression - couch potatoes come out of the woodwork to make good on their New Year's resolutions. That's what makes January the single biggest month for new membership enrollments at health clubs, according to the International Health, Racquet & Sportsclub Association.

Well, now it's April, and some of January's new members have already stopped appearing on your treadmills as the weather has improved. Worse yet, summer - traditionally clubs' slowest time of the year - is just around the corner. If the number of tours you give has slowed to a trickle, it may be time to think of ways to bring in a flood of new faces.

One method of attracting prospective members - the open house - is a sort of default effort in many (if not most) club owners' outreach efforts. Yet, surprisingly, open houses often fail to achieve even modest membership goals. The most fundamental mistake is thinking that merely opening the door is enough. In fact, health club consultants suggest seven important considerations when staging an open house:

1. Plan ahead. "An open house isn't something you decide to do on a Monday for the following Saturday," says Chris Batchelor, executive vice president of Vitality Marketing Group. A quality open house takes 30 to 45 days to schedule, leading Batchelor to suggest making an open house more of a quarterly event.

Frank Guengerich, executive vice president of WTS International in Silver Spring, Md., agrees about the time it takes to produce an effective event, but maintains that more, not fewer, events are needed during recessionary times.

"These are among the best kinds of things you can do right now," Guengerich says. "Think of it like your membership is a bucket of water. Back in 2007, the bucket was full, but then a new competitor came to town, and that dumped a cup of water out. When the economy started to tank, that was another cup. Filling your bucket back up usually happens a cup at a time, too. You have to give 10 tours here, 15 tours there - it usually doesn't happen that one event is going to bring you 200 new people."

Which is why Guengerich subscribes to:

2. Target specific populations. "I'm bullish on any event if it's focused on special populations," Guengerich says. "You could do an event for a different local business every day."

Batchelor's standard time frame, again, is a bit longer, but he agrees with the concept. He suggests instituting a Business of the Month program that starts with a targeted open house. A local company is selected and, for the duration of the promotion (typically two weeks), all of its employees, their family members and their friends can participate in everything the club offers for free, including a complimentary fitness evaluation, a personal training session and various other perks. Employees are eligible for an exclusive membership discount if they join during the program.

Unlike open houses targeting the general public, events focusing on specific companies are inexpensive to advertise, requiring little more than messages sent to the company e-mail list, and a flyer tacked up in the company's break room or tucked into employees' mailboxes.

3. Make it bigger. An open house is best done in conjunction with a larger event. "I'd go beyond 'Come by and take a look at us,' " Guengerich says, suggesting a tennis tournament, health fair or club anniversary celebration be the event's centerpiece rather than the open house.

"A complimentary cardiovascular seminar is a fantastic way to get people through the door for very low or no cost," Batchelor says. "You want to have some kind of health event - a seminar, a presentation by a local doctor or chiropractor - associated with it in most circumstances, rather than just having people walk around the gym while somebody tries to sell them a membership."

Even when arranging targeted open houses, club owners should keep in mind that the best way to get prospective members excited is to get them involved, and at a time when the club is hopping. Invite visitors to come try equipment or sample a group exercise class, and hold the open house over the lunch hour or after work, when the club is full of energy.

4. Share the wealth. Club owners should think in terms of their bartering power with local businesses, especially those with whom they share a customer base. If you are bringing in 50 people who are interested in their health, don't you think the local Subway owner or massage therapist would want to reach them, too? If your 50 prospective clients tend to be people with a higher disposable income, the owners of the local hair salon or the new high-end restaurant might just want to come by to introduce themselves.

Opening your open house to other entrepreneurs is a no-brainer, Batchelor says. The massage therapist or health food store owner can give away their services or products on the day of the event, and prior to the event you can each offer each other's coupons as a mutually promoted inducement to both business' customer bases.

"You can involve any type of business - even a landscaping business, it doesn't make a difference," Batchelor says. "What better place to advertise than a captive audience of 100 in return for participating in an open house? It's no-cost advertising for them."

5. Involve your membership. A referral program that benefits your current members is probably the best way to extend your reach in the community, so be sure to offer your current members incentives for bringing friends and family to your open house. Send invitations to your current e-mail list offering rewards (free club services, typically) for their participation in the event. A more exciting reward idea, one that's sure to bring a charge to the event itself, is to raffle off a larger prize (a one-year free membership, say) to one of your current members who has brought a guest.

6. Make special offers. Free services are cost-effective to offer prospective members as an incentive for joining during the open house because you're basically forgoing a little money today for a bigger payoff down the road. "Our inventory is space and time; we don't have a cost of goods," Batchelor points out. "You're not giving a discount on a steak that is going to go bad if you don't sell it. You're giving away discounts on something that is not tangible. If you knock $25 off an enrollment fee or postpone a customer's first monthly payment, it doesn't cost you a dime."

Batchelor has even used an incentive just to get people to come to an open house, and though it cost more than a dime, it paid off in the end. "We ran a half-page ad in the local newspaper that said we would give $5 to the first 100 people who came to the event," he says. "We ended up having 80 people come for their $5, and just over half of them joined that day. When you consider that it costs the average club $45 to $65 to solicit each new membership, that was a pretty good deal for the owner."

7. Mine for information. You'll attract some impulse buyers to your open house, but more of them will be thinkers who you can follow up with and close - providing you've gotten their contact information. "Clubs are notorious for crummy sales and follow-up systems; people fall through the cracks all the time," Batchelor says. "If you get contact information, though, even if somebody comes in, takes some free stuff and walks out, you can market to that person forever." New prospects should be added to your e-mail list, sent your electronic newsletters (if you don't have one, start one) and sent regular (or semi-regular) reminder e-mails asking them to join. So long as your efforts aren't overly aggressive, those prospects should become members more often than not. "If they're going to join a club," Batchelor says, "it's probably going to be yours."
Sign Up for AB Today!
Get industry news, insights, and new product information delivered straight to your inbox.
Read Next