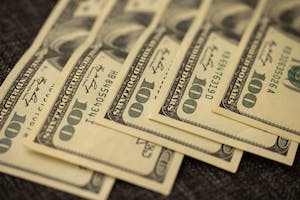 Football and men’s basketball players on scholarship in one of the Power 5 conferences can expect to soon earn a minimum of $50,000 each year he plays because of the influx of cash from so-called booster collectives brokering name, image and likeness deals.

Blake Lawrence, co-founder and CEO of Opendorse, a company that helps athletes and schools navigate the ever-changing NIL landscape, made that prediction this week based on market trends, according to The Associated Press.

The increasing dollar amounts available to college athletes through the recent formation of collectives has drawn the attention of the NCAA, which this week released guidance for schools in the hopes of maintaining the original intent of NIL compensation.

College sports leaders are concerned some collectives have gone beyond paying athletes for activities such as endorsements and appearances and breaking the pay-for-play ban by offering cash to influence athletes’ decisions on where to go to school. NCAA rules prohibit boosters from making contact with prospective recruits.

According to the AP, Lawrence co-founded Opendorse in 2012 to facilitate endorsement deals for professional athletes. The former Nebraska football player was among the advisers who worked with the NCAA on forming NIL policy, and he expanded his company to bring opportunities to college athletes to cash in on their fame and developed compliance technology that allows schools to keep track of the deals.

Lawrence based his $50,000-a-year per player minimum on the assumption booster collectives are directing about $5 million annually into NIL pools and that some of the money will go to athletes in other sports. There are collectives supporting NIL at more than half of the 65 Power Five schools, including Notre Dame, and more are forming, the AP reported.

“It’s an overheated market,” LeRoy told the AP, “and it really reflects the pent-up demand to pay players.”

Lawrence said a top, five-star recruit could have NIL earning potential of more than $1 million per year when money coming from sources outside the booster collective is considered, especially if he is a quarterback. Four-star recruits could earn well into the six figures.

But even a lower-ranked recruit at a less glamorous position would be well-compensated — the $50,000 earner — because the booster collective will make sure of it to keep peace on the team, Lawrence said.

“If an entire class arrives to campus and they are all scholarship athletes and one individual is earning six figures and another is earning zero dollars, that is going to create a rift,” Lawrence said. “What these groups have done in certain markets is realize it’s about equality. Each individual in this locker room will receive some sort of support so there is equality at a base layer. And there may be additional value for the most marketable and influential individuals in each recruiting class.”

Jason Belzer, an attorney and founder of Student-Athlete NIL, which has worked with Penn State and Rutgers to set up collectives, told the AP that establishing fair market value for athletes is a moving target and that it is critical for the athletes getting paid to provide real services in return.

Belzer used the example of each SEC school having a collective with $10 million a year going to football players. He said members of the collective supporting the last-place team could become disenchanted and regret funding NIL.

“They’re gonna say, ‘Well, I’m not putting money in anymore, because my investment didn’t provide any return whatsoever. I didn’t get my name on a building. I didn’t get access to anything otherwise. And wait a second. Now I don’t want this coach anymore, but I just gave all my money to the student-athletes, I can’t even pay to buy the guy out,’” Belzer said.