Its 40-foot-tall glass curtainwall, complete with enormous YMCA graphics, amounts to an outsized hello to the streets of Houston, Texas, with the buzzing activity inside in full display. But the design of the Tellepsen Family Downtown YMCA - a LEED Gold replacement for the original downtown Y that incorporates design elements from the 1941 building - actually builds on an intimate element common to early southern architecture. Designers envisioned this "front porch" as a two-story component comprising a cafÃ© and outdoor seating area that serves as a relaxed, welcoming entry to the building. Tucked underneath the curtainwall that spans the upper three floors of the north faÃ§ade, this gathering space is the gateway to a bustling facility, with visitors experiencing the building vertically from bottom to top, from the public spaces and locker rooms on the lower floors to the exercise spaces on the upper floors.

The judges responded to the active and social spaces, and in the way they meshed together around a grand central staircase intended to orient visitors and provide a place for social interaction - in much the same way that the front porch joins the building with the streetscape. In the words of one judge, "The project's interior circulation is successful in unifying and bringing clarity to a large, vertically stacked facility. The project is also notable for the attention given to providing strong visual and physical connections to the surrounding urban context."

Vertically stacked programs like this often lack cohesion. The designers obviously took great care to ensure a connection between floors, between program spaces and from inside to outside.

A terrific solution for a tight urban site. The "front porch" defines the entry transition from the street. There are nice design touches throughout, like clerestory windows in the locker rooms.

The overall design very nicely organizes the program elements of a YMCA and creates a strong visual connection to the street and downtown Houston beyond. The vertical organization, the curtainwall and the oversize graphics successfully support the designers' vision of a front porch element. 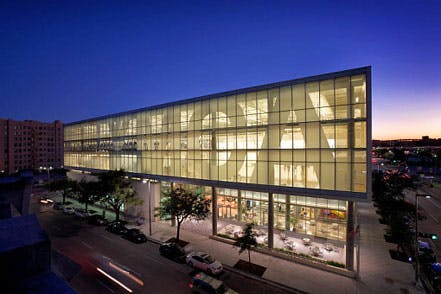