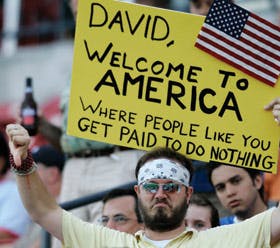 At least initially, the number-one question surrounding the signing of English soccer star David Beckham to a lucrative Los Angeles Galaxy contract was, "Did he do it for the money?" But as the summer wore on with his on-field appearances kept almost to nil by an injured ankle, it quickly became apparent that the fans' resentment of Beckham's good fortune was misplaced.

While little was said by the Galaxy's owner/investors about the effect the erstwhile Real Madrid midfielder might have on the Galaxy's position in the Major League Soccer standings, they were positively giddy about the impact on the team's bottom line. Back in April, Tim Leiweke, head of Anschutz Entertainment Group, which owns the Galaxy, felt the need to justify the January signing, reporting that the team had racked up $13.3 million in income he said was directly attributable to Beckham. "We've already made our money back," Leiweke boasted to reporters.

By July, the MLS was also contemplating an indirect financial windfall, with some investors predicting the burgeoning interest in the league would boost the amount of money the league could charge new franchisees beyond the $30 million it cost the expansion Toronto FC owners last year. 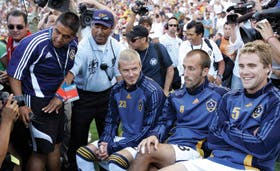 All of which makes one wonder why MLS decided that it should take this particular moment to soak its relatively few fans to an almost unprecedented degree.

Anger began to simmer around the time that Beckham made his 16-minute debut as a substitute in an exhibition against the English Premier League's Chelsea on July 21. (The game was seen in an average of 947,000 television homes, the most-viewed Major League Soccer telecast ever on ESPN or ESPN2, according to Nielsen Media Research data.) Fans in Los Angeles had suddenly made the Galaxy a hot (and pricier) ticket, and without the team's star attraction, these were just ordinary MLS games that previously had failed to generate much excitement.

But Angelenos' dismay was nothing when compared to the ire of soccer fans in other cities. The quirkiness of the L.A. schedule, hardly discussed prior to the season, suddenly seemed sinister: By the time of the July 19 All Star Game - which Beckham attended wearing his street clothes, trailed by hundreds of photographers - the Galaxy had played just 12 games (40 percent of its full-season slate), whereas every other team had played at least 16. The MLS denied that the league schedule had been rigged to take advantage of Beckhamania, but the team's backloaded schedule meant the Galaxy would travel to every other MLS stadium subsequent to Beckham joining the league after the end of the European season. 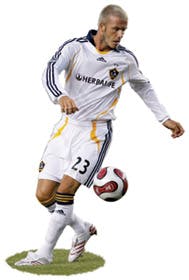 And then, Beckham didn't play. FC Dallas offered holders of tickets to the Dallas-L.A. SuperLiga match (Beckham didn't even travel to Texas) the first crack at tickets the next time the Galaxy was scheduled to play there. FC Toronto officials, on the other hand, went on the attack, alerting their fans days before the Galaxy's visit that no refunds would be given should Beckham not play. In these and other MLS cities, teams had either bundled Galaxy games, forcing fans to buy tickets to games they didn't want to see if they wanted a glimpse of the man who some derisively started calling "Mr. Posh" (a reference to his Spice Girl wife), or at the very least significantly increased the face value of tickets.

MLS officials responded by saying that ticket prices and marketing are left to the teams and corporate sponsors - even though the league's central ownership structure makes this sort of distinction rather meaningless. And so, it was clear by early August that the Galaxy and MLS were on the verge of squandering the possibility of building long-term interest in professional soccer in the rush to make a quick buck.

Make that many bucks - the top ticket price to the Dallas-L.A. game was $250. "Talk about short-term thinking," Bob Stellick, a sports marketing consultant, told The Globe and Mail's globesports.com. "That just smacks of opportunism."