In honor of its 14th consecutive bowl appearance, Georgia Tech offered $14 tickets to the Independence Bowl in Shreveport, La., but still only sold slightly more than half of its 10,000-ticket allotment. 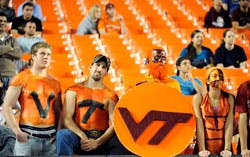 In honor of its 14th consecutive bowl appearance, Georgia Tech offered $14 tickets to the Independence Bowl in Shreveport, La., but still only sold slightly more than half of its 10,000-ticket allotment. Atlantic Coast Conference brethren Boston College, Clemson and North Carolina experienced similar struggles, falling between 4,000 and 5,000 tickets short of selling out. Virginia Tech, which lost $1.77 million due to unsold Orange Bowl tickets in 2009, fared worst of all, failing to sell 11,000 tickets from its allotment of 17,500 for this year's Jan. 3 Orange Bowl.

"There are two groups of people who go to bowl games," says Zach Lassiter, assistant athletic director for ticket operations at the University of Utah, and a charter member of NCAA Proactive Ticket Sales Professionals, a peer group that shares best practices. "Every school has that base of people for whom it doesn't matter who you're playing or where they game is, they're going to go. It's become their family's holiday tradition. There's the second group of fans for whom everything factors in - the opponent, the city, how economically they can travel to the game."

While Utah's bowl base is growing, it's not enough to cover a given ticket allotment, according to Lassiter, who came within 2,000 tickets of selling out his 11,000-ticket allotment for the Dec. 22 Maaco Las Vegas Bowl against media darling Boise State.

Virginia Tech's latest ticket troubles came despite Hokies' head coach Frank Beamer encouraging reporters at a press conference following the ACC championship game to "be sure to tell our fans to buy their Orange Bowl tickets through us, not anywhere else."

Beyond staying home, fans indeed have options. Not only do the bowls retain the best seats for their own sales efforts, the secondary ticket market often has deals too good for fans to ignore. "That is an issue that I and my colleagues, other athletic directors, have been fighting for the last couple of years," Virginia Tech athletic director Jim Weaver told The Virginian-Pilot in mid-December. "We could sell more of our tickets if we had better tickets to sell."

Mercifully, the ACC doesn't leave its members entirely on the hook. Schools are responsible for the first 6,000 tickets and partially responsible for the next 2,000. The conference covers any unsold tickets beyond that. Some conferences, including the Pac-10 and Big 12, absorb the cost of any and all unsold bowl tickets. On the other end of the spectrum sits the Big East. "We pay our BCS rep $2 million to go to the game, and then we also have a travel allowance, which will come to about $300,000," says Big East associate commissioner John Paquette. "But the league does not share in ticket losses."

That's bad news for first-time BCS rep Connecticut, which as of late-December had sold only 4,600 tickets out of its 17,500-ticket allotment for the Jan. 1 Tostitos Fiesta Bowl. (The bowl considers those 17,500 tickets sold, since the school is under contractual obligation to buy them, regardless of whether they are resold or not.) Connecticut sold its entire inventory of $111 tickets, but still held thousands priced at $155, $235 and $255 - collective value: more than $2 million. It didn't help that tickets could be found at stubhub.com for less than $25 in the weeks leading up to the game. "The secondary market is a killer," UConn athletic director Jeff Hathaway told the Connecticut Post. "You can't deny it."

Like Virgina Tech's Beamer, Huskies' coach Randy Edsall made a plea to fans to buy tickets through the school, but he was asking a lot. In addition to its ticket allotment, UConn was faced with a hotel obligation of 550 rooms, priced at $125 to $225 per night, for three or seven nights, according to the New Haven Register. Add to that the matter of getting from Storrs or anywhere else in New England to Scottsdale, Ariz., and it became easier to understand why Husky fans stayed away in droves.

"The biggest factor is whether your fans can drive there or if they have to fly," says Utah's Lassiter, who admits his team has had the recent good fortune of playing in bowls located relatively close by. "Because Las Vegas is a five and a half hour drive from Salt Lake, we had an inherent advantage. And Las Vegas is an attractive place for people to spend a couple of days."

Nebraska, too, drew a choice bowl destination this season. Trouble was, the Huskers had just been to San Diego last bowl season, and had played this year's Holiday Bowl opponent, Washington, in a 2010 non-conference road game. "We had a lot of people go out to San Diego last year and support us, and we had probably an even bigger following head to Seattle in September," says Holly Adam, Nebraska's assistant athletic director for ticketing. "We knew it would be a little tougher ticket to sell."

Nebraska's Holiday Bowl Blitz, which took place Dec. 20 and 21, accounted for roughly 1,250 ticket sales, pushing the Huskers' total past 8,100 - still well shy of their 11,000-ticket allotment. For those two days, the school waived handling fees on purchases (tickets were priced at $60) and tossed in a pair of seats to the men's basketball Big 12 opener (to be played while students' are still on winter break). Fans who placed ticket orders during the Dec. 20 Sports Nightly radio show were entered into a drawing for Husker merchandise signed by former players and Tom Osborne, the legendary NU coach and current athletic director. More than a hundred tickets were sold during one show hour alone, according to Adam. Nebraska also encouraged fans not able to make the trip to purchase tickets and donate them to armed services personnel in the San Diego area. Oklahoma has run similar military promotions, and Missouri and Connecticut did likewise this season. "Some people bought one, and we had somebody call who wanted 20," Adam says. "We were just like, 'Oh, my God.'"

Like most bowl-bound schools, Nebraska was not surprised to find its fan representation at the Holiday Bowl exceeded the school's own ticket sales. "We do know of some people who were going to go directly through the bowl, because the bowl has better tickets to sell in better locations," Adam says. "Obviously, we would take better seats. If something were to change, we would welcome that change. But I understand the bowl's part of trying to sell tickets, too."

CNBC sports business reporter Darren Rovell was less understanding, writing on Dec. 17, "Something has to change. Schools have to say enough is enough. This system is broken and we can't do it anymore. But while athletic directors complain and complain, no one has stepped up."

Is the sheer number of bowls - a record 35 this season - working against ticket sales? Fourteen teams with .500 winning percentages played in this post-season, including one that went 2-6 in conference play. "I don't see a problem with 35 bowls, if they can be filled," says Fiesta Bowl ticket manager Adam Lehe, who points out that the bowl has sold out 25 of the past 26 years. "I think the bowls are great. The experience for the players, the fans and the coaching staffs really make the bowls stand out."

Purdue University associate athletic director Glenn Tompkins would agree, despite the fact that the Boilermakers will make more money ($2.7 million in shared Big Ten Conference bowl revenue) by not qualifying for this post-season than it netted from an appearance in the 2000 Rose Bowl ($600). "The individual increases in licensing, revenue, fund raising - these are opportunities that all make a bowl trip a very valuable experience," Tompkins told WFLI-TV in West Lafayette.

Still, would a football playoff be an easier sell? Lassiter, for one, likes the post-season as it is, but says ticketing within a playoff format could be patterned to some extent after the NCAA basketball tournament. Bracket advances could be dealt with inside a week if predetermined neutral sites were employed, particularly with social media and printable tickets expediting sales and distribution. "Logistically, it would be possible," Lassiter says. "We'll figure out a way."

For now, he can at least empathize with colleagues who have struggled to sell bowl tickets. "It's not a simple process. You have to work at it," he says, based on ticketing experience at three Division I schools. "We had everything in our favor this year, so we were fortunate, but I've been on the other side before."

University of Connecticut basketball fans are not happy with the recent leap in ticket prices...
April 21, 2022